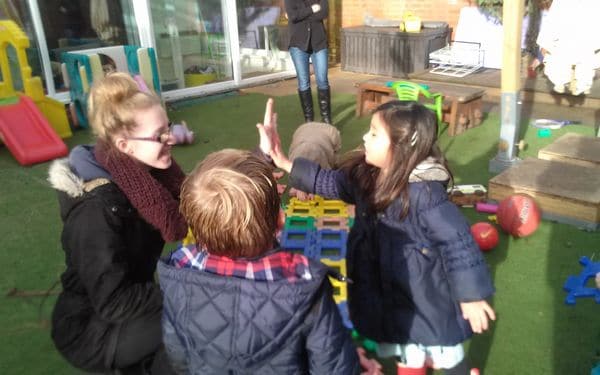 The Chimps this week are back in full swing and have been meeting a few new friends who have come to join the nursery. In the mark making area, what had started out as marking activity turned into a bit of a jamming session as the Chimps enjoyed the sounds the crayons made when they tapped and banged the table. At the creativity table the children have been observing the rather hypnotizing effects of gloop trickling down from their hands. There have been various sensory baskets on display for the Chimps to rummage through and they have taken to finding all the mirrored toys and smiling at themselves. The walkers have been out this week to get the lovely crawlers up on their feet and give them even more to smile about as they stroll through the room. Some of the Chimps have been very self-sufficient in the book area, grabbing their own books and flipping through the pages attentively.

Well the teddy bears must have been a bit cross with the Howlers for leaving them on their own for so long since the Howlers had to go on a teddy bear hunt and look high and low for their colourful fluffy friends. Not to worry as they were all found and cuddles worked their magic. They even made them breakfast and dinner in their role play kitchen with dyed spaghetti. All creatures great and small get spoiled at this nursery. Speaking of creatures great and small, the children have been spending time focusing on the earth and enjoyed searching for creatures in their shredded paper soil. They examined insect cards and even had a go at bug impressions and noises. Ben visited the Howlers to spend some time painting with the numicon shapes, counting holes and talking about colours. In the small world area, there’s been a bit of railroad construction going on as the Howlers created a railroad area complete with houses and small world people to man (or woman) the station. They have also been practicing their line work (and a little bit of transporting) with chalks and paper.

The natural resources have been out this week and the Baboons have spent a great deal of time examining textures, shapes, and weights and then creating structures from them. Some of their comfort toys were built houses complete with tables and eating utensils while others opted to create people with bodies, feet and their own, ummm….boats. In the mark making area, some of the Baboons have been asking the adults to draw their favourite things so they could trace over the lines with the felt tip pens. The phones were out and the Baboons had some special calls to make as they wanted to take some extra time to phone their parents and say thank you for their Christmas presents. The Baboons have all seemed to come back with the fire of independence as they have been shunning the assistance of the team to read books by themselves and finish puzzles on their own. They made their own play dough this week are becoming more aware of when to add more water or when more flour is needed for their mixture. Soon they will be teaching you how to make the world’s best play dough.

There has been lots of chitter and lots of chatter about Christmas presents and family time in the Gorilla room and they haven’t held back in sharing their favourites and highlights with their friends. Some of the children have returned and showed the Gorillas team their new reading skills, reading three letter words at a time and also copying them onto paper and in the moon sand marking area. Quite a productive break. In the role play area they have been practicing their baking skills with measuring cups and spoons and producing samples of birthday cake for their friends. On the computer they have watched some bakery footage so they knew just the right thing to do for that perfect loaf of bread. Once their cakes were made, a few of the more enterprising Gorillas decided to sell them at a rather high price to everyone. Never too young to understand the monetary value of quality ingredients! Next week they are going to further this role play activity and have a plethora of new pretend foods and money which they can’t wait to get their hands on.