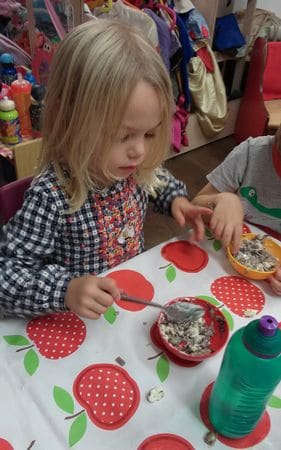 This week was ‘Multicultural Week’ and your children were treated to the richest educational, vibrant and fun week that they could have hoped for. Thank you to all you parents/siblings/grandparents that came in to make it so – we are really grateful. What a week! So let’s get started…..
The Chimps were certainly no exception when it came to learning about different cultures. They began by singing their ‘Hello Song’ in different languages each day. They also played Chinese drums and other real instruments from all around the world– they particularly enjoyed the rain stick and our giant African drum. The team froze different treasures for the children to find in icy water – they loved it but their little hands did need a lot of warming up afterwards. They did more searching in the form of flags in sand and they made fabulous Indian and Egyptian necklaces inspired by photographs with small paper pieces – they look amazing. They made delicious Samosas with Caz and they looked at photos of the Eiffel Tower, The Empire State Building and others and with the pictures up on the wall they got building with building bricks. They made some pretty artistic replicas as it goes. They read stories from dual language ‘lift the flap’ books which they really enjoyed – in fact they read stories in different languages every day. To celebrate British sport they ‘played’ football and looked at photographs of footballers playing the beautiful game. They practiced their ball rolling down pipes and catching them at the end and they listened to multicultural music all week.

The Howlers had a plethora of visitors this week from different parents offering their priceless first-hand knowledge of different countries – we have so many cultures in the nursery and clearly so many kind parents willing to share and teach. Always a winning activity our little Howlers the team filled their water tray and they poured and decanted water to their hearts content in and out of containers with different sized jugs and funnels. Irene wasn’t going to let Multicultural Week go by without drenching the days in Italian culture and language and she brought in her real pasta maker for her little ones to make their own pasta – fabulous. They used it to make pasta and play dough. They made ravioli and tagliatelle and they looked at pictures of and learned the names of the many different pastas – conchigiglie, spirali etc. They made an Italian restaurant and armed with their homemade pasta they pretended to go to the restaurant, order food and eat it etc. They introduced different implements that they may find in different countries e.g. woks and chopsticks and they mixed up their different food and practiced picking it up. They had many an Italian song time with Irene and Paco and have become really familiar with lots of Italian words thanks to their enthusiastic teachers. They did some finger painting with different coloured jelly which they loved squishing around in between their fingers. They had a party with light sticks and other glowing paraphernalia with the blackout blinds down and they found this very exciting! They played the ‘Talking Stone’ – a Native American tradition for children – they passed a stone around a circle and when they were holding it they could say something and the rest of the circle had to listen. They had a visit from Anika’s mum and older sister (5 years old!) and they taught the children some Bollywood dancing moves – wow. They made collage Turkey’s with Ella’s mum using feathers and card and other crafty stuff and Isabella’s mum came in and did some lovely children’s singing in French. They made Chinese lanterns – painting them and sprinkling them with glitter. For their role play they of course had to have a travel agency and pictures of children in all different countries – they booked holidays and learnt all about the places they were off to. They spent the week reading books about children from around the world and loved looking at the pictures of the children in different dress. They did some really careful necklace making with threading beads and proudly wore their creations.

Baboons spent the week singing the ‘Tick Tock’ song in different languages and quite frankly their little accents are amazing! They made different patterns and pictures with lots of shape cutters and wet sand – they were immersed in this for ages. They made their very own castanets and decorated them rather beautifully. They used food colouring to do Henna patterns on their hands and they stared at them proudly for the rest of the day. They made play dough and they made aeroplanes out of ‘octons’ and talked about where they would fly them to. They watched different celebrations from different countries on their tablet and were fascinated by the different children’s traditional dress. They coloured rice with rainbow colours and poured it for ages in and out of containers and mixed up the colours. They played endlessly with their babies in the role play area and they looked at multicultural books which they had on display all week in the book corner. They celebrated British sport by playing football and tennis and they put together puzzles showing different countries of the world. They made their very own passports and role played using them at the airport. They watched the Haka from New Zealand on the computer and imitated its movements and sounds which was rather exuberant and funny. They did some amazing Bollywood dancing with Anika’s mum and older sister and they made some rather delicious peroggi and cornbread – they loved both the making and the eating part of this! They did German singing with Frederike’s friends and they did some French singing with Isabella’s mum. They learnt all about the perfectly placed Thanks Giving from their very own resident American Ebone.

Our Gorillas started each day with a lovely multicultural discussion about other countries – they said what languages their parents spoke – and boy there are a lot! They made and laminated flags and put them onto their very own boats to pretend to sail around the world. They labelled countries on pieces of paper and used all sorts of different materials to represent land and sea and mountains etc. They cooked some really delicious pretzels and they made their own globes out of salt dough; looking at the globe and talking about why sea is blue etc. They created lines for the edges of countries and the start of the sea. They had lots of multicultural books out all week and they read them individually and in groups – asking questions and learning about the world. They had a variety of amazing visits from parents – Leontine’s mum read to them in French, Mia’s mum read a story in Polish and Dante’s dad read stories in Spanish. Frederike sang German songs with them and two lovely friends of hers who work with children and happened to be over to visit came in to sing children’s songs in German. They also did this with the younger groups too – a big thank you to them. They played many different sports from around the world e.g. rounders and football, and they played a brilliant traffic light game with Paco where he taught them all about being safe whilst having lots of fun at the same time. Paco did lots of Spanish singing with the children too. The lucky Gorillas had a yoga session with Frank’s mum and did some French singing with Isabella’s grandma. It’s a wonder they found time to talk any English at all! They had a fabulous Tapas restaurant where many an hour was spend ordering and eating Spanish delicacies and learning about different foods. They played a guessing game where they had to say what was in the bag game by touching (no peeking) and they printed some lovely paintings with the Numicon shapes. They also spend a lot of time looking at their globe and talking about names of countries and what they would find there/how far away etc. and they practiced their shape knowledge by creating triangles and squares out of connectors in garden and talked about shapes.

Next week is ‘Things People Do’ week and we have some jam packed planning sheets once again. We have quite a few parents/carers lined up to come in and show the children what they do but there is always room for more so please send us an email or give us a call if you would like to pop in. It’ll be worth it we promise!