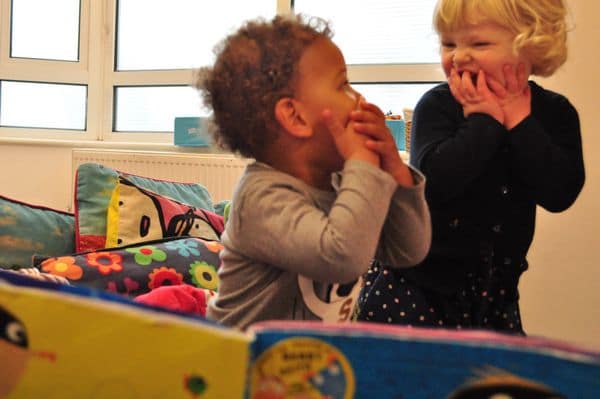 The Gibbons have been visiting their small world rock pool this week and having a blast naming all their different creatures and feeling the textures. They’ve even created a few of their own. They made turtles using egg cartons, cotton wool and googly eyes and decorated their small world people with playdough mermaids’ tails. Nice transformation there Gibbons! They’ve also made our favourite, hand print crabs. We’re sure they’re your favourite also. For music and movement, the little ones put their sea dancing shoes on and mimicked seaside animal movements such as creeping along like a starfish, blobbing up and down like a jellyfish (I don’t know if blobbing is an action, but let’s just run with it), and flapping their fins like a manta ray. In the Green room, the Gibbons have been enjoying their new paint dabbers and noticing the effects of dragging, banging, and pressing the dabbers down onto the paper. This week, all the groups made a Turkish snack called mücver. The ingredients were courgette, egg, cheese, flour and parsley and the children enjoyed grating, chopping, mixing, and spooning everything into muffin cases. I must say, it was one of the tastier things the children have made. Yum, yum!

Babies, babies everywhere and not a drop to drink! A fair few of our little Baboons have welcomed or are welcoming new siblings so their story focus this week was all about the new baby. The children have been talking about their new or impending roles as big brothers and sisters and discussing their feelings about this big transition. They’ve also been focusing on their Golden Rules all week, talking about how to keep themselves safe (no hopping on the conservatory steps), being kind to others, and taking care of our living things such as Sizzles and their herbs. Speaking of herbs, the Baboons have been documenting their coriander growth with the room tablet and observing change over time. For their problem solving activity, the children worked on their recall skills as they were shown a set of toys and then had to guess which one was missing when staff sneakily took one away. The children were so excited about their feet printing activity that they took to the floor again to enjoy a large scale group collage using a variety of materials including sand, paper scraps, and glitter.

The Gorillas were certainly very well fed this week with their Indian restaurant open for business. It was quite a popular destination so the children had to book their tables in advance. Their menu included authentic Indian cuisine and the chef and wait staff were very attentive to their customers’ needs, who were all very polite and using their pleases and thank yous. At the Reggio table, the Gorillas have been using our new influx of daffodils as reference materials for their paintings. The children have been talking about the differences in the daffodils as some were still in their buds, full bloom, or withering. Paper plate artist palettes have been the thing this week as the Gorillas have been exploring colour, mixing them to create various hues. Their sounds and letters activity was “Mrs. Browning Has a Box” which is sung to the tune of Old Macdonald. Staff shake an item and offer clues about the item in the box and children identify what it is. The Gorilla’s climbing beans are doing really well and will next week be transferred to our growing beds in the garden.  Eventually they will be housed at the allotment – which we are excited to say will be paid it’s first visit (bar Louise and her family) by all staff and our lucky Gorillas next week.  It’s been a while coming but finally the occasion has arrived – good times. At the computer, the Gorillas have been getting to grips with controlling the mouse and are now playing phonics games with much more dexterity and coordination. They’re even making sure they’ve signed on to the computer list to ensure that everyone has a fair chance at being on the computer. Well done, Gorillas!