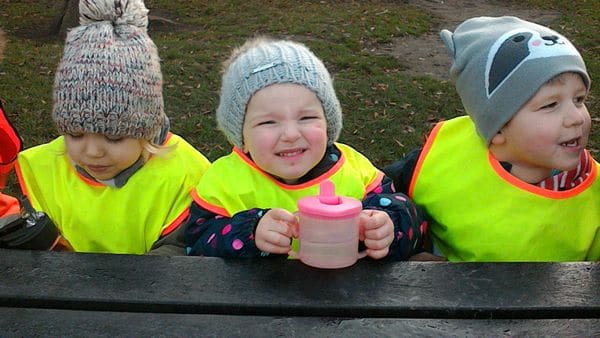 It’s all feeling a lot like Christmas this week as all the rooms have gone full steam ahead with their winter activities and singing – we hope you are all coming to hear them at the mulled wine eve on the 19th! The Gibbons decorated snowmen with cotton wool, carrot noses (which may or may not have ended up on their faces), hats, scarves, and buttons. In the Reggio area, they were creating playdough reindeer with sticks for antlers and pom-poms for noses. It’s not been terribly chilly, but that was no reason to not decorate some paper mittens, just to keep that winter wear on their mind. This week, they also made rice and pasta shakers with plastic cups. For their music and movement activity, they beat and banged away to drums. They practiced playing quietly, loudly, and stopping on cue with stop hands.

We’ve got a load of colourful resources for the dance room so what better week to play colour games for music and movement. Using cones, the Baboons organized coloured objects and went on a search all around the room for matching colours. It’s been rather wintry in the small world town with a blanket of flour snow laying thick upon the land. The Baboons didn’t seem to mind as they trudged through the snow with their cars and lorries with little to no issue. In the garden, Alex took them on a gift hunt as Santa seemed to have made a little pit stop in the run-up to Christmas. Using directional language and action words, the Baboons had to listen to directions to find where the present was hidden. Needless to say, they were ecstatic to find a new pack of stickers. The maths table has been a source of creativity this week as the Baboons created felt pictures (various shapes cut out of felt) on black squares. Some of the Baboons were very keen to create enclosures and frames around pieces of felt, as well as stack our natural materials such as pinecones and stones. Very creative, Baboons.

It’s been snowing in the Gorilla room after all the Gorillas decorated snowflakes this week with glue and glitter. At the Reggio table, the children have been concentrating on threading string around pinecones and they’ve been very excited to share what they’ve decorated at home. Carrying on from their foot measuring activity last week, the Gorillas measured objects around their room using the rulers. They talked to each other about which items were the biggest or smallest and predicted their lengths on the rulers. Not ones for tiring of maths (let’s hope they keep this trait), the Gorillas were adding and subtracted with the colour cups and wooden balls. Gorillas have been lending a hand to wrapping up objects around the room. Sports in the park this week including a cone game where they throw rings and collect up cones. They also played the traffic light game and running warm-ups. Using the tape dispenser (they loved this and caught on quite quickly), they practiced wrapping up gifts and managing those sticky fingers to avoid twisting the tape. For their writing activity, everyone wrote to Santa, talking about the things they wanted and generating some ideas as to what they should leave out for Santa as a gift. Some impressive ideas. You’ll have to ask them. Tee-hee.