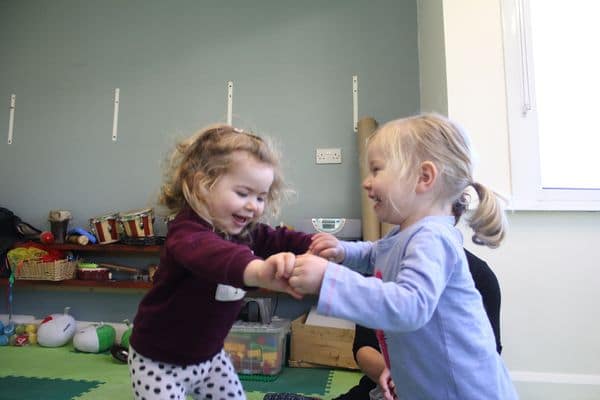 The Gibbons have been chasing marbles around this week (under the team’s very watchful eyes) as they practiced how to take turns using the marble runs. Their sharing is a work in progress, but they forgot all about the effort of waiting as they watched the marbles make their journeys. Slightly more successful than turn taking was listening and attention for music and movement. The Gibbons banged and strummed along with their instruments until they heard “Stop hands!” Once it was to stop, they had to wait until they heard “go.” In the White Room, the Gibbons have decided they were in want of some transportation so, armed with paint and a cardboard box, they made one. As you do. After a little assembly, the Gibbons were proud to ride around in their bus going “beep, beep.” At the creative table, the children explored a range of materials including wood blocks, spikey balls, and sponges to create their artworks. Their song of the week was Old McDonald and the finger puppets were out to give them some hints as to the next animal on his farm (dog, pig, sheep, horse, and duck).  It’s been rather chilly this week and the Gibbons have had snow on their minds as they made winter foot prints for their new display board. Brrrrr….

The Baboons have been looking a tad dusty this week as they’ve had flour on their play menu and have found all manner of ways to enjoy it. Some of the children have been creating flour formula for their baby’s bottles in the home corner area, making marks in the writing area, and some just enjoying flour clouds as they threw it in the air. For their craft activity, the Baboons have been assembling faces together using various skin tone paint, and facial features cut out from magazine clippings. Please don’t be alarmed when you see the faces as the children were, of course, given free rein to stick them on at leisure. So, they look rather…unique. The children are still absolutely enamoured with their new cars. So much so that they’ve even pretended to be cars in the garden and have been racing around, avoiding pedestrians and pumping their own petrol. We may have a word about upgrading to solar energy. As part of switch-off fortnight, the Baboons have been taking about how objects work using terms like on/off and looking around the room for things that need to be switched off when not in use.

*To the tune of Hokey Cokey* Put your left foot in and trace it all about! The Gorillas have been extending their measurement vocabulary this week as they traced around their feet. Once they finished, they compared their feet sizes, placing them on the outlines, to determine whose feet were smaller, larger, or equal to their own. They have also been practicing letter formation as they traced over the alphabet, recognizing lower case and upper case while doing so. In the Reggio area, the Gorillas have been pouring and mixing using measuring utensils, spoon assortments, and dry goods (rice and pasta). For their maths activity, the Gorillas learned about grouping objects. On the table, the children put various objects together and then counted what was left when objects were removed. At Nature Kids, all plans were put on hold as the children discovered buckets and puddles full of ice. This led to talk about the weather and the kind of temperatures that create ice. They broke the ice up and created transient art with the fragments, sticks and stones. When they weren’t exploring the ice, they were examining how their planted seeds were doing and measuring any growth since their last visit. Just as well they had plenty to keep them busy in this frosty weather.