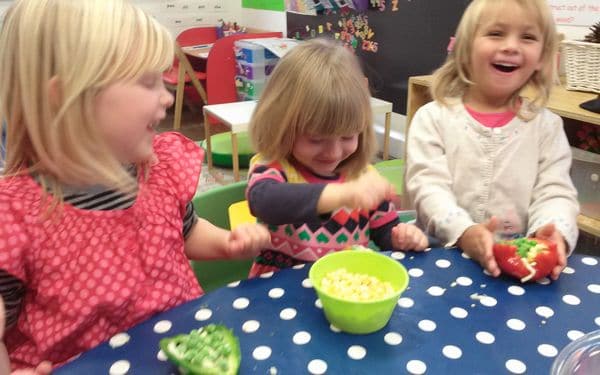 The wheels on the bus go round and round…… Our Chimps took a trip to Palmeira Square to watch them do just that as they waved to the square’s never-ending stream of buses. They were also pretty interested in the pigeons (that won’t last long). They have been building up their vehicle-related vocabulary and recognition of transport sounds including helicopter, horns, and everyone’s favourite – the nee-nawing ambulance. What is it about that piercing sound that they love? Speaking of love, ‘tis the weekend of romance and the babies haven’t neglected to make Valentine’s cards as a token of their affection (although I’m sure a good night’s sleep is affection enough). In the creative area, they have been practicing their glue sticking with glittery collages. The Chimps have not disappointed with their role play as the soft play area was transformed into a jungle and the chimps braved the swooping monkeys and slithering snakes as they had a picnic. Couldn’t think of a better place to have one – really.

The Howlers have been quite industrious making their very own marble run from empty tubes and rolls. Their sensory tray was an assortment of pinecones, oats, and sticks and the children grabbed some spoons and transported one section to the other. Ever the transporters. In their small world it’s all been feeling rather arctic as they’ve enjoyed a brrrrrrrilliant (I know, I’m sorry, it’s late in the day and I can’t help myself) icey animal terrain with polar bears, igloos and glaciers. It was beautiful to look at andThey particularly enjoyed watching all the animals slide off the ice and back into the foam. Their newest word this week is “hexagon” since they’ve been constructing with the hexagon shapes. They’ve also been attempting to roll them across and more than a few have taken a little time examining those pesky straight edges. In their safari area the Howlers have camped out in their sleeping bags this week and watched a jungle book nursery rhyme (to the tune of “Wheels on the Bus”) with lots of animal noises. We apologize if your child’s new favourite impression is squawking like a parrot – one never knows what they’re going to latch on to. Since the dance room has so much more space to leap and pounce the Howlers did their very best impressions of jungle animals. Never ones to neglect our beloved pets, however fake they are, they ended the session with a lullaby to our resident dance room fish.

It’s been all systems go in the Baboon room this week as the seasoned pet shop staff pulled out their till and started properly charging for their impressive pet stock – which includes a panda, tropical fish sharing a tank with a shark, and a rather colourful turtle. Some of the children have even managed to train their pets, showing us an array of tricks like roll over, sit and even shake hands… well, paws. At the creative table the Baboons have clamped various materials and natural resources onto clothes peg and painted them. Pom-poms were the favourite, but they also had a go with netted material, leaves, and straw bunches. The small world area was a dinosaur park so the Baboons read all about Tyrannosaurus Drip who didn’t look like the rest of his family because he was diplodocus who could swim rather than a tyrannosaurus who couldn’t. They also took quite an interest in Goldilocks and the 3 Bears and have been paying close attention to whether their chairs are soft, medium, hard, or just right. The Baboons worked on their pencil skills with Numicon tracing in the writing area. At the chalkboard, just to mix things up, the children created some wonderfully ‘unmessy’ water paintings. They marvelled at how quickly their pictures dried and the team breathed a sigh of relief at the lack of cleaning up required. And the board had a good clean for all their artistry. Nice work Baboons.

Well you have probably noticed that the Gorillas have been deeply submersed in a sea life extravaganza. Their role play area has been a combination of sea life shows – at 1.00 and 3.00. Well you can’t just pop in on these creatures at any old time, and a sea world souvenir shop selling books, cuddly toys and of course tickets. In fact it was a very organized affair as the Gorillas had to wait in a queue to purchase their tickets and the ticket person made sure that each Gorilla had a ticket upon entry. I believe there was a stiff fine for ticket dodgers. In the water area, they made their own magnetic fishing rods for some angling in the water tray. Nemo and Dory made an appearance in the malleable activity as the Gorillas tried to recreate their favourite fish with plasticine modelling clay and pop them in their very own hand made junk modelling aquariums and submarines. They also made crowns and bangles too as quite a few children decided point blank that mermaids wear crowns and bangles, so that is what they wore. All week. Rain or shine. The Gorillas also did some lovely sounds and letters dancing activities in the dance room and made sushi (whilst talking in Italian no less) which they tried at tea time.