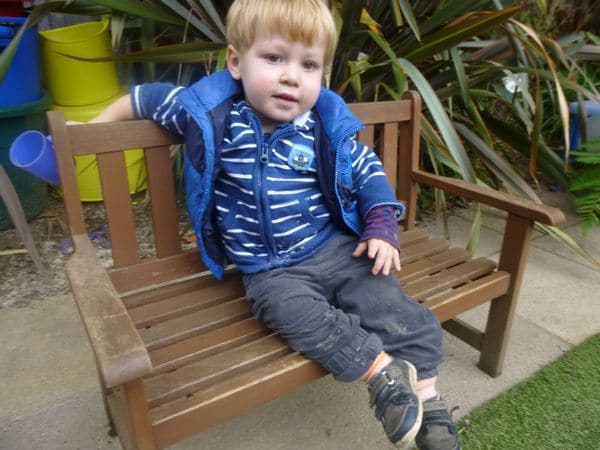 Our sweet little Chimps have been getting messy with bright blue spaghetti this week. They used it to do some wiggly and squiggly paintings. They have been washing babies in water and bubbles and laughing at bubbles landing on each others noses. Amber and Carly have been reading them teddy bear stories and singing the teddy bears picnic whilst they clap and jiggle along. They have been making patterns, feeling the texture of shaving foam and clapping to make it splat everywhere which they have found very funny. They have been exploring their shiny box and looking at themselves in the mirror and having a ball on our new bouncers in the garden. They have also been stacking and knocking down and filling and emptying boxes. They welcomed a couple of new little friends this week and have been enjoying playing alongside each other and attempting to share their toys!

The Howlers did finger painting this week and got messy as ever. They loved looking through their coloured plastic portholes and watching things turn different colours. They built some brilliant towers, higher than themselves in the garden with our giant building bricks. They enjoyed playing in their ‘plastic garden’ and hiding behind its walls and playing peekaboo. They did some lovely shapes with crayons and playing with the hoola hoops. They had the sensory and light balls in the tent which they thought was very exciting and they giggled and had a really fantastic time. They did some puzzles, played at being doctors and even managed to sweep up all the mess they had made. They may love getting their room messy but they are also the most interested in clearing up which is rather nice! They have new friends William and Heidi who have been amazing and are already indispensable parts of the gang.

The Baboons made a really great baby-care center this week. They had everything you could imagine and those babies were spoilt rotten. They got really messy too with ‘cloud dough’ and ‘moon sand’ bakery. Sounds amazing eh? Well it was. They had all the bakery equipment out and loved making things to put in the oven and wait to rise etc. They sprinkled their creations with cloves, cinnamon, ginger and other herbs and spices. They pretended to watch their favourite television shows with their pretend telly. They talked about the characters they remember and what colours they were. They even remembered some theme tunes. They had a fabulous time making some amazing glittery pictures with a hell of a lot of glue and glitter and they did some really careful stenciling in the writing area. Clever them.

This week the Gorillas have gone absolutely jungle crazy. Their role play was extended from last week and they have been exploring and investigating and talking in depth about what they have imagined and seen. They have also had a ‘box’ themed week, as you can see from the pictures below. They decorated a box to pass around at circle time and encourage turn taking. They had all sorts of discussions and listened to the person who was holding the box. They did brilliantly. They had masses of fun decorating big and small boxes with bright paint, feathers, acetate and all sorts of other collage materials. The boxes really do look amazing. They worked alone and in teams. Brilliant. They used their many boxes in free play and shared ideas about what they could be used for – it was a veritable cardboard box drama show. They practiced all sorts of motor skills and learned about healthy fillings and combinations by having a sandwhich making session. They were very proud of their creations and rightly so. They also did food tasting with blind folds on which they found very funny. They shook boxes and pressed around the edge to find out and guess different instruments that were hiding inside. They did lots of yoga sessions this week too (see pictures) and concentrated so hard copying all the moves it was really very impressive and they had a really wonderful time.