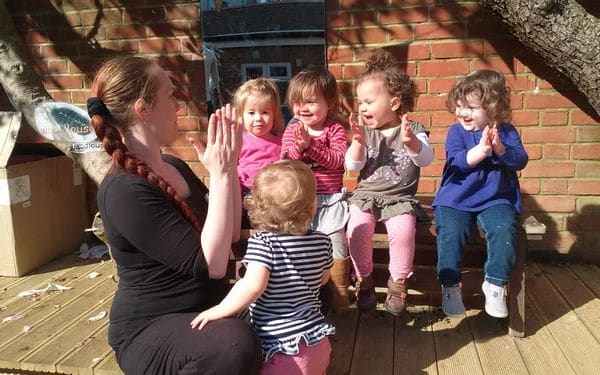 Our cheeky Chimps have been having a great time rolling balls to each other and the team this week in their new conservatory. They showed sweet pride when they cleverly rolled it in the right direction and rightly so. They had sets of stacking blocks in the sand and explored frozen jelly and ice with absolute joy. They built towers with soft blocks and had a good old chew at the same time and they pointed out different body parts and looked in the mirror when asked by Carly and the team. They had lots of fun making a lot of noise with all sorts of different bells and drums, bashing them loudly and softly with different implements – their squeals and faces said it all. They are really enjoying crawling up the soft barrels into the conservatory and are getting very good at it and now they have their new set of soft play shapes to crawl around on too. Their new room is providing wonderful new physical challenges for them and we can hardly remember it not being there. They also just love watching the other children playing outside and the attention they get from them. As you can see from the pictures, out in the garden the Chimps have been helping to feed the rabbit and crawling and rolling around the hill at the back giggling away and exploring. They even found time to take a trip to the beach in the sunshine and throw stones and sing songs in the breeze.

The Howlers this week have had a little furniture shuffle around and have created a much nicer messy and mark making area which works a lot better than before. They have a new bright yellow drawing table which has seen a lot of use already. They have been making smoothies with all sorts of delicious fruit – choosing what to put in and tasting it along the way. They have been doing lovely looking water-bead multicoloured rainbow painting (not an official title). They loved this and concentrated investigating the colours and textures for long periods of time. They had the octons out and tried to put them together to make towers and necklaces – and rather fetching princess crowns. They loved this though they did need a bit of help as it is quite a tricky thing for little hands. They made ‘foam dough’ which they enjoyed squidging and squashing and they painted monsters before doing some ‘monster maths’ which came in the form of many different tasks like helping to count the number of googly eyes that they put on the monsters. They did many an action song and had a play dough treasure hunt. They had a great heuristic play session which saw them engrossed in investigation and they had a fabulously fun bumper drumming session with the Baboons. They also mixed lots of different liquids and floating and sinking (of eggs in salty water) in a series of science experiments that they just loved.

The Baboons have been getting used to their new conservatory this week. They have been loving playing on the steps and sitting in their new book corner and playing with ocean animals etc. They have been talking about babies at group time and doing the Makaton signs for different family members. Having lots of different sea animals out in the conservatory and has helped them learn the names for them all and how they move etc. They have been making their own instruments and making their own play dough. They have been building detailed ‘cities’ with wooden blocks complete with tunnels, bridges and sky scrapers. They have had lots of exotic fruit out in a few tasting sessions and they have been building more cities and towns with our wooden building set to which they added animals and people to create stories. They have been practising carefully using stencils and holding pencils correctly at their writing table and they have been practising counting and colours with abacus’s on their new maths table. Outside in the garden they have been getting physical by rolling and throwing hoops and rings around the place and to eachtoher and they have had a few very energetic and loud sessions of the ‘Hokey Cokey’.

Our Gorillas this week have been talking all about the different seasons and cycles of days, months and weeks. They have been setting up and having lots of fun with the marble run too which is always a popular one. They did some rather beautiful printing with spring colours and natural things found in the garden like leaves and bits of wood. They made some very cool puff paint and did some great pictures. They measured, poured and scooped cooked and uncooked macaroni for an ongoing malleable activity all week. In ICT the children played with the laptops. The most popular activity of the week however, was their rather brilliant science lab. They looked hilarious (but very serious) as they adorned goggles, overalls, pipettes and measuring jugs and mixed colours, did experiments and made potions. They talked to each other like scientists and learned scientific vocabulary. Wonderful. They also made rainbow pictures out of peg beads and did relay races outside. They played the keyboards and the guitars and learned about different speeds and pitches of music. The Gorillas had their Italian fix too with Irene and Maria and have been continuing to learn about animals and furniture and singing their Italian songs. They are just brilliant at their accents and are lapping up their new language knowledge.

For the whole nursery there was of course lots of garden action this week and it was especially lovely to see the Gorillas looking after the little Chimps. It’s just fantastic when they all get together!

Please remember from next week the Baboons will use their new entrance. They now have a new peg area at their door and at the bottom of the stairs – we hope it is much better for you. The Chimp entrance will also of course be less cluttered. The new Baboon doorbell is on the left of the nursery outside the gate and you will be let in with any luck by one of the Baboon team. Have a great weekend everyone x