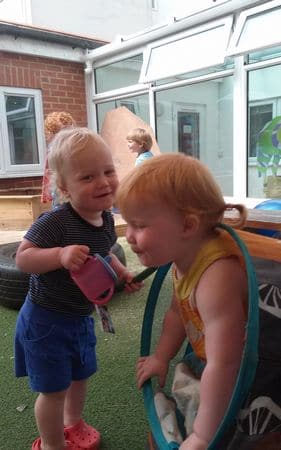 The Chimps this week have been practicing putting on their own shoes and socks. They proudly matched pairs and with help were very good at it. They had cups and plates in water in their builder’s tray and they practiced their pincer actions by decorating their home made wizard sticks with glitter and glue. They really enjoyed investigating and getting messy with corn flour gloop and they looked with interest at lots of black and white baby story books – particularly appreciating the snowflake one! They did a really sweet painting session with raspberries of all things – tasty and pretty. They made a train out of crates and sang train songs which they loved sitting in and they sung some number songs with actions – particularly enjoying being tickled at the end. They rolled about on their mats outside, fed Sizzles the rabbit and did some watering in the vegetable patch.

Our clever little Howlers have been counting to 3 in different languages this week. They have been making shakers and sticking collage bits all over them and shaking them proudly. They used different shaped blocks to make some very pretty and geometric prints and they have been making ‘water melon play dough’ and mostly enjoyed picking the seeds out of the dough. They then furthered this by adding all sorts of different ingredients to play dough like seeds, glitter and other stuff. They also did printing with okra this week and this made all sorts of weird and wonderful patterns. They used their Winnie the Pooh story book to instigate conversation about washing, sleeping, cooking and playing as they read the book to the children. In their role play area they had a hairdressers and loved doing each other’s hair – practicing being gentle at the same time. They ripped wrapping paper and this made them laugh as they tore lots of different shapes. They played bowling with pins and balls and loved it when they knocked the bowling pins down. They had some lovely instruments and singing sessions and they had another few lovely heuristic play sessions. They also used their story book ‘Cloudy With a Chance of Meatballs’ to create an interactive story with flour and spaghetti and loved throwing it all about and making a mess at the appropriate moments.

The Baboons did many sea-related activities this week. They watched videos of sea creatures and pretended to be them, talking about what they looked like and the differences between them and themselves. They practiced their fine motor skills by cutting shapes out of magazines and making collages and they built enclosures for animals out of wooden bricks. They had lots of different types of vehicles and photographs of them too and looked at their different aspects and talked about what the different parts did. They put together and played with the car tracks and cards and they did some mark making and made different creatures and people out of polenta. They played musical statues, did an obstacle course and of course had sports day on Friday. They made cupcakes out of wet sand and they had different coloured play dough and missed it to make different patterns and colours – using all sorts of mathematical language along the way. They also proved themselves to be very clever as they used the wooden geometric shapes to overlay patterns on card.

The Gorillas learnt a lot about floating and sinking with different activities this week. They made some ice boats and sailed them with different cargo around the water tray. They also did other floating and sinking experiments where the team asked them to get different objects from around the garden that would float and sink and they talked about why they did what they did. They did some careful cutting of animal shapes out of magazines and made some carefully placed collages. They read phonics books and a few of the children were very proud to be able to read three letter words. They made replica food out of play dough and served it up to their friends in the role play area. They attached pencils and crayons to toy cars and they drove them around to form letters and words. They really enjoyed doing their ‘world map’ foam floor puzzle and they used it to talk about the different countries. They made up a dance routine with ribbons in music and movement and they looked at lots of different toy animals through magnifying glasses and talked about their features, textures, where you would find them in the world, what they eat etc.

The week ended in a fabulous sports day afternoon. It was a scorcher and lots of you came to support the children in their first ever sports day. There was a fair amount of competitiveness among the Gorillas. But I am sure as is normal every sports day winning seemed to mean more to the parents! Thanks for coming everyone and thanks to Caz and Ben for heading up the organisation. Good work. Photos of sports day will be in its own album on the website later this week. There are some good ones so we will send you an email when they are ready.