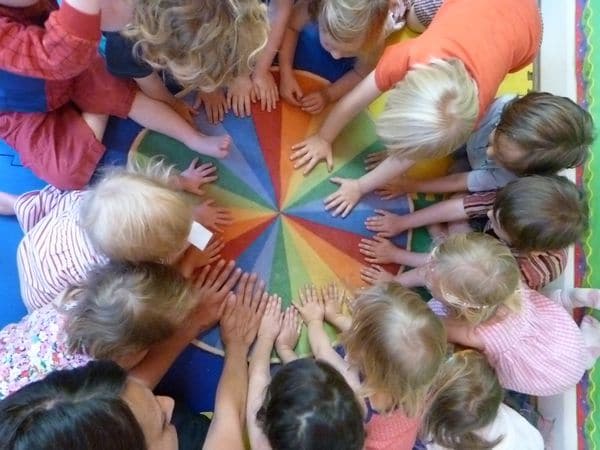 The nursery of course, despite the fans, has been really hot this week so we have been letting the children jump in and out of the garden spray to keep cool. The babies have a beautiful new floor and we have purchased a new big dolls house (with the Gorillas at the moment but it is for everybody) with all sorts of furniture and little people. The babies have a rather lovely new wooden rocking duck too. So, on with the action from the week…

Our little Chimps got a brand new and rather beautiful floor this week. It looks bright and fresh and rather funky not to mention being super soft to crawl around. They have had their garden doors wide open all week and it feels as fresh as being outside which is just wonderful in this boiling weather. We hope you, our parents, like it because we feel we have improved their time at nursery tenfold. Our youngest ones have been playing and exploring with our torch collection looking in and under things and looking around the sleep room where they made it all dark. They have been playing with and transporting cornflour gloop from its own tray into the water tray and seeing what patterns and textures they can make. They have done some tasty healthy cooking – pepper boats. Please click here for the recipe they were delicious and we used the herbs from the veggie patch too. The chimps have a new wooden rocking duck which has been a huge hit with all the babies and they have been rolling balls down giant tubes and learning that if they drop them down the top they can rush and catch them coming out of the bottom. There are plans to extend this with different lengths and sorts of pipes and half pipes as the children have loved this activity so much. For more information on how to develop this activity click here.

The Howlers have been following the nursery suit and making their own pizzas complete with homemade dough all week. I have had firsthand tasting experience with one of Jude’s creation and it was delicious. They have been really going for gold with their gross motor skills with brooms and giant rolls of paper and making amazing broom paintings. They have also been trying to make actual shapes out of their blue play dough which they helped to make at the start of the week. They had a builders tray full of pieces of ice of all different sizes (very welcome in this weather) and watching how it melts. Then they played with the freezing cold water. They have been filling different containers with rainbow coloured rice too and watching the way it falls as they pour it into different containers.

The Baboons have had a week learning all about fruit and vegetables. They have been tasting all sorts of exotic fruit this week – lemons and limes, grapefruit, prunes, apricots and all sorts of other things. They also had a fruit and vegetable shop role play area and spent a lot of the week trying to eat the produce (they wouldn’t make much profit as greengrocers that way).They have also been singing lots of phonic songs (they are really giving those Gorillas a run for their money!) and drawing letters and pictures in playsand. They have been talking about and feeling the moon’s surface with our amazing lunar small world and looking up different planets and close ups of the moon on the internet. They have also been pretending to sail around the world in a boat that they made in the garden. They have been really enjoying watering our vegetable patch and have been talking all about what we are growing in it. We are really passionate about creating healthy lifestyles in our children and this week the Baboons have been focusing on pushing this forward. They have new images of healthy foods etc. to talk about at the snack table and will be furthering their investigations with a close look, feel and smell of our herbs in the vegetable patch. Please click here for more information on why we feel this is such an important part of our care.

The Gorillas have been very busy indeed. They played a really vibrant and enthusiastic game where they sorted and categorized all sorts of objects into colour size and animal groups etc. They also had really fantastic and descriptive discussions about what makes them happy and sad and they took turns and listened brilliantly to each other. They got the mats out and practiced forward rolls in the garden – they loved that and with practice got really quite good. They did spaghetti painting with all different coloured spaghetti and made rainbows with it (whilst singing the rainbow song!). They had pirate stories, sung pirate songs and also made up their very own pirate tales – they just love anything to do with pirates don’t they? They had school role play complete with computers, pencil cases, uniforms, book bags, a black board, exercise books and all things to do with school – they are getting to know so much about it and did really detailed role play – impressive stuff. They too as usual did some great phonics singing and actions and tried to spell their own names on the magnet board with magnet letters.