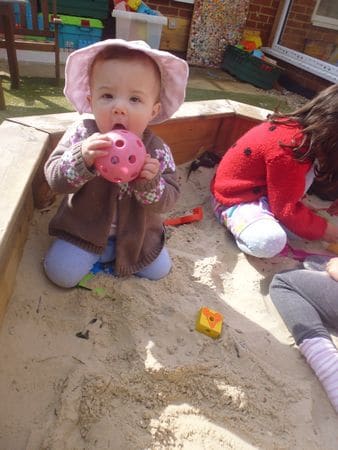 Well thank goodness the children, just as the sun has shown it’s long awaited face, have been able to play in our lovely garden. What a lovely sight it has been….

The Chimps have been welcoming their two newest recruits this week, Hedzer and Ella, and they are both doing brilliantly and exploring their new environment with enthusiasm. They have had our large collection of rather spangly bangles out this week which they have been trying on, rolling about and swishing around in the box. They have also been making and playing with bags full of different coloured water – they loved that. They have been watching ‘dancing raisins’ in bottles which they found fascination. They have been making dinosaur feet. They and driving the cars around and sliding them down the garage ramps and they have been doing some very special crayon drawings with our giant egg crayons (these are brilliant for little hands to practice fine motor skills). They have had our collection of pop up toys out and predicting when they were going to pop up really made them laugh. They talked through different tubes and into boxes and objects and listened to the differences in their voices. They spent a lot of time scrunching and tearing paper in the builders tray an activity they will never tire of, and they practiced rather clever ball rolling to each other and the Chimp team. They also looked at lots of things,the most popular being parts of faces, through binoculars and magnifying glasses.

Our lovely Howlers have had a whole week of an ‘Under The Sea’ theme. They have been doing all sorts of things to teach them about the sea and what they might find there. They have been looking at all different types of shells and fish this week in their water tray and at lots of pictures and some videos of sea creatures too. Irene and the team talked to them about how to look after the sea and how precious it is to us. They pretended the water tray was the sea and taught the children all about not throwing plastic cups or bottles into it as it would hurt the fish. They really seemed to understand and cuddled the fish to show they cared – super cute! They loved splashing the fish around and feeling the shells. They also held larger shells up to their ears to hear the sea and created sea scene collages gluing different shiny paper over images of different ocean animals. They made mini mushroom pies which were just great – the children felt the different textures of the vegetables and rolled the pastry and made their own shapes. Then they tasted their rather posh creations. They made people out of their Popoids. They loved stretching their funny stretchy limbs and popping the pieces together (with a bit of help). They had colourful slimy spaghetti out all week which they enjoyed a lot and they looked at and read lots of story books about babies in tummies. They had a role play sea-world with inflatable’s, goggles, hoopla skirts and other such paraphernalia. They loved playing with Nemo who got on rather well with all their teddies. They pretended to be sea creatures whilst they moved in a jiggly fashion through our tunnels and they sang the ‘Under The Sea’ song on repeat because they loved it so much.

The Baboons now have their new door which has caused quite a lot of excitement – and it provides a lot more light which is nice. Harper and Jude sat by the door when it first appeared just looking at it for a whole morning as if it was going to get taken away. They have been really carefully making pictures with stencils and making lots of great constructions with Lego. They have been really enjoying the Lego wall in the outside classroom too, making roads and other pictures. They have had a ‘Garden Fortress’ for their role play area and a tent with sleeping bags, cushions and other cosy items. They loved having story time in here. In their small world area the children have been having tea parties for their dolls and they have been eating and drinking some rather exotic things. They have been pouring water carefully into cups and generously passing them around. They have been playing ‘Mr. Bear Mr. Bear Your Honey’s Not There’ in music and movement and have been taking turns beautifully and learning all the words and what comes next. They made their own play dough, passing around the utensils and ingredients, (they could probably make this all on their own by now as they can easily pour and name what goes in it) and they played with it outside in the sunshine.

The Gorillas, like the rest of the nursery, were very excited this week to have the garden back, to have some sun and to be entering it through the new ‘magic door’ as it has now been named. They were so excited to be back on the slide and rolling around on the slope. They put together the marble run and rolled many a marble down it and even managed to fit the pieces onto the taps and run water down it – well done Tallulah for a first class idea. It fit perfectly. They did lots of tracing words and naming letters better than many a reception child I am sure. They had the city buildings and cars out for small world and a campsite complete with all sorts of camping equipment and a tent in their role play area. In their sand tray they had lots of different rice and pasta and different containers and poured and pretended to make food and drinks for everyone. They looked at Mira’s ‘Body Book’ and learnt a lot about the human body and they played the ‘Missing Object Memory Game’ – guessing cleverly the object that had been removed. They explored and practiced making lots of different rhythms in music and movement and listened to music from all different cultures. They did lots of phonics as usual and printed with forks making pictures of gardens. Fabulous.

The whole nursery enjoyed the garden this week to the max. happily the sun was out a lot and it was lovely to see the children having so much fun. The conservatories are now built and now it is time for the insides to be done. Won’t be long now – though now the children can play happily outside they can comfortably watch the progress. Have a great weekend everyone!