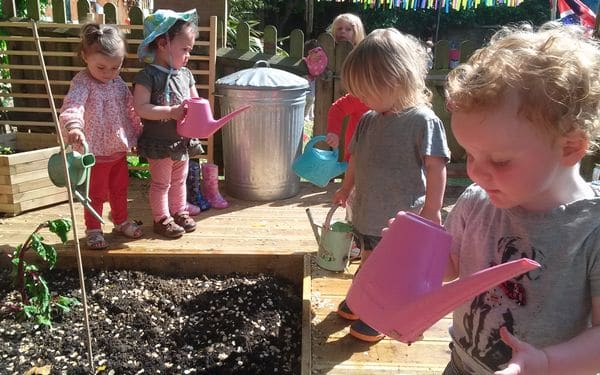 Our Chimps this week played with balloons of all different shapes and sizes which was really good fun until of course a couple popped and the activity had to be abandoned! They loved patting them to each other in their conservatory. They painted lolly sticks different colours which they did really carefully and they made ‘pasta towers’ in play dough with spaghetti. They carefully made patterns sticking the pasta into the dough and admired their creations. They sung the ‘banana song’ with real bananas as props and they had the old favourite of soft blocks out which our Chimps never tire of. They played with their ‘Crystal Bubbles’ which they watched inflate and enjoyed popping and playing with. They had a lot of lions and tigers in their small world area which they made roar and jump and hop about. They investigated their ‘emotions bag’ and held the different pictures and walked around looking at them with interest. They had chalk boards in the sand and they practised all sorts of animal noises whilst looking at pictures of the animals. They made a lovely obstacle course for the babies with their soft play shapes and the team helped them crawl and walk over the course. The rest of the nursery were keen to join in and help too. They did ‘pom pom’ dancing to music and loved waving their colourful pom poms about as you can see from the pictures.

The Howlers have been talking all about foods, taste and what is good for us. They have started to make a nutrition wheel for their activity board and are learning about food groups, vitamins and energy. They have been playing with fish and buckets and sand – hiding them in the buckets and finding them again and they have had their ocean animals in water which they have been making swim and jump about. They were singing fishy songs and loved doing the actions whilst they sung ‘nip nip’ – they thought this was hilarious. They have been painting lolly pop sticks with different colours and glitter and talking about fairies. They were looking at our miniature hanging garden for the festival and imagined fairies living in there. They sorted teddies into the different sorting boxes that they made last week and loved popping the teddies into the different holes. They made yoghurt, fruit and oat cups and really enjoyed chopping up the fruit and mixing up the mixture, not to mention eating the finished product! They needed some help of course but carefully fitted the different rainbow cogs and wheels together and spinning them all around. The team made a really interesting ‘archaeologist box’ complete with magnifying glasses, different stone and shells and maps and they loved experimenting with making things bigger and smaller and looking at the patterns on the maps. They used pretend fish as a prop to sing one of their favourite songs ‘slippery Fish’ and they read story books about having 2 mummies. The team talked about different family groupings with the help of illustrations and the children listened and looked intently. The Howlers had lots of different writing and mark making equipment out on their writing table and they pretending to take notes and answer the phone. They had kitchen equipment out in their role play area and particularly enjoyed sorting washing into lights and darks and filling up and turning on the washing machine. They had a great drumming activity and learnt musical terms such as ‘piano forte’ and that it meant quiet/slow etc. They had a few visits to the vegetable patch and loved walking around watering and talking about the different things we are growing.

The Baboons enjoyed doing their alphabet floor puzzle this week. They explored matching the sounds to the letters and then finding letters hidden in the environment by the team. They did some more colourful bubble wrap painting and were very proud of what they produced. They painted pasta and threaded it carefully onto necklaces and they made moon sand from scratch and played with it in the paint trays. They really love the texture of this. They talked about whether it felt sticky/dry and what we needed to make it. They filled buckets with actual and patted it down, turning over the buckets and making sand castles. They made ‘puff paint’ and loved feeling their puffy creating on after they had been cooked in the microwave. They read ‘Dinosaur Roar’ and loved saying the words and predicting the bits they knew – of course doing a lot of roaring at the same time. They did stencil painting and had a role play beach scene where they put on sun cream, played in the sand, looked at pictures and talked about holidays. They played with balls in the garden and watched them roll down the slide and they did some more yoga where the children really showed a good understanding of directions and were really engaged in moving their bodies and holding them in different ways.

At group time the Gorillas really enjoyed talking about how to be kind and why and what kind words and actions were. They played with dinosaurs and stones in the sand tray and made up all sorts of stories about them. They decorated plant pots with fabulous colourful dotty tissue paper and they decorated lolly sticks for our vegetable patch. They went to the vegetable patch in small groups and watered carefully and talked about what was up there and they even started making a fantastic scarecrow to make sure the plants don’t get pestered. They played with the marble run and typed words on the computer, copying them carefully. They planted Alfalfa seeds in little pots with cotton wool so they can learn all about how things grow and roots etc. They read books about being kind and they used giant foam letters to trace around and colour in. They had a vegetable garden in their role play area to really get to grips with their planting knowledge and they practised making their own snacks and pouring their own drinks throughout the week. They helped to make our rather wonderful exhibit for the Brighton Festival’s Hanging Gardens of Brighton too – please see the pictures and try and get down to the event this Saturday in Jubilee Square outside the library.

We're so excited that our frogs from last year have revisited so we can teach the children all about the life cycle of a frog, right now the spawn are turning to tadpoles! 🐸

What are you and your family up to this weekend? Tell us in the comments!