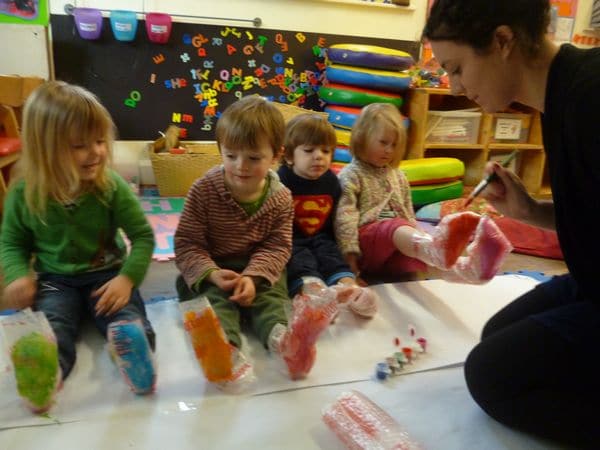 Our Chimps made a right old noise all week with lots of keyboards ‘at their fingertips’. They used their ‘Makaton bag’ which they picked out and did the signs they chose. They had all sorts of fun and interesting vessels in their water tray – they used spoons to pour water down tubes and much more. They decorated giant leaves with paint which they really enjoyed and they did different animal prints and animal picture collages, making really fabulous and careful pattersn. For cooking they made ‘Gruffalo Crumble’ which was all sorts of weird colours and loved stirring the mixture, watching the colours mix and getting messy. They had their sensory box out and squealed with delight as they brought out objects from the dark and were surprised at what they felt like. They went to the ‘Palmeira forest’ (that’s what they called it – I guess it looks like a forest to them!) and read ‘The Gruffalo’. They had a picnic and read stories in the dappled sunshine under the trees. Amber got very animated as always! They used tea bags to make tea-stained pictures – different! They had a garden in their role play with grass and insects and grass snakes etc. For a heuristic play exercise they had lots of different bracelets and poles and they practiced hooking the bracelets over the poles. They also practiced fitting lids onto different containers which was rather clever. They had bumper ‘Row Row Row Your Boat’ sessions which they adored and they loved that the team all came into nursery dressed up for book week. They went to the park in the sunshine to play ball games with all different types of balls and looked at squirrels, played in the park and looked at the fish.

Our clever little Howlers have been looking at a few letters this week and some of them have been pointing out the letter ‘O’ which is rather impressive. They have been having loads of fun on their slide as always and looking at themselves dressed up and making faces in the mirror. The children really enjoyed playing with the rainbow rings and making crowns and bracelets and lining them up in neat formations. The water had jugs and cups in it and there was a lot of careful (and not so careful) pouring going on. The Howlers made some very tasty cheese pastry hearts which looked absolutely lovely (I didn’t taste them so can’t comment on that) and they really did cut the shapes out themselves! For ICT they had a table full of different types of phones which of course were used to call mummy and daddy all week and tell them what they were doing. The children practiced their letters even more by using the magnetic boards and magnet letters. They had a role play hairdressers and certain children became hooked on brushing people’s hair and putting hair clips and hair bands in as best they could. They went on a lovely nature trail in the park and marvelled at squirrels and birds and different flowers and plants. They ‘learnt’ some different languages in the form of favourite songs which they thought was great fun. They had a few outings to the park in the sunshine and ran around and played ball games. On Thursday they got Irene back from her travels and have been hearing all about Australia. She missed her little Howlers a lot and with good reason.

The Baboons this week learnt lots of ‘well-being’ signs and actions with their Makaton. They did some colouring in of Fireman Sam pictures which was a hit of course with the boys especially. They played a lot of musical bumps which they found hilarious, bumping around to their favourite songs. They watched fire engine videos and talked all about the different things they do and parts of the fire engines. They had rainbow coloured shaving foam out and made lots of fantastic patterns. They played with ‘quicksand and did some ‘twisty’ sponge paintings. They had a fun time crushing raw pasta (each to their own) and they played for extended periods of time with the train track, adding people and vegetation and talking to themselves and eachother. They went to the park to play ball games and run around in the open spaces.

Italian Lessons are Back:

Our fabulous Gorillas have been doing lots of Numicon this week. They have been adding and subtracting and matching different amounts and learning about odd and even. They have been making spaceships and rockets and space stations with Lego (very imaginative). The children have been making different length words with the letters and magnetic board and sounding them out. They have had the wild animal collection out in their small world corner and spent a lot of the week lining them up in height order and in ‘family’ groupings – the Gorillas of course always find their own interpretation of activities.. They continued with their pet shop role play area and this also turned into a vetinary surgery as quite a few of those poor animals fell ill this week. Thursday saw the return of Irene so their greatly missed Italian lessons started again today and as you can see from the pictures the children were very excited and learnt a lot. They went to the tennis courts at the park a few times this week due to some pretty nice weather at last and played catch and football and all sorts of games. One game they played was a very energetic game of ‘object relay’. They understood the game and put all their effort into it – great stuff. In music and movement they have been getting in touch with their expressive feminine sides and doing brilliant ballet moves – whatever their gender. Some of them even dressed up in ballerina costumes. The children pretended to be ‘teachers’ and read stories to each other, looking at the pictures and filling in the gaps – they are getting so grown up! The Gorillas also went to the beach and played on the stones and threw them into the sea, had some snack and read stories in the fresh air and sunshine.

So it has been another fabulous week. The conservatory structures will both be completed by next Friday. There has been a small break due to the glass being prepared. The soft play flooring and the main conservatory flooring is on order and the week after will be used for screeding the floors, plastering the walls and other finishing touches. Anyway it is all on track thank goodness. All groups are now using our Tapestry online observation system and you will all be getting an observation soon, if you haven’t already. We have had great feedback from those of you who have. Have a really lovely sunny (woohoo) weekend everyone love from all of us x