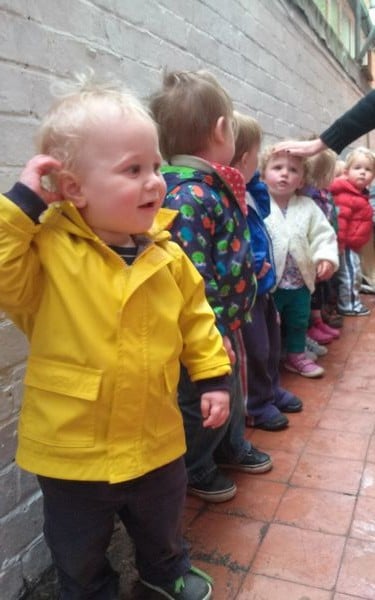 This week the Chimps have been exploring materials flexing their stretching and pulling muscles and playing a little game of hide and seek. The chimps have been supporting themselves with the shopping trolley and investigating everything else in the room walking around with it. They learned ‘Old MacDonald’ in Italian with Maria. Their mark making has been sticky, sweet, salty and bitter with coffee, sugar, salt, and pepper sticking – exciting stuff. They’ve been exploring their ball box, reaching inside of it and then posting all the different textured and sized balls back in. They have also been doing ball painting and connecting the big garden connectors with help and hiding inside what they have made. They have been investigating their soft and sensory books and have had some rather lovely heuristic play sessions.

The Howlers have been all around the world at group time – talking about children from around the world and paying particular attention to their own differences and similarities by looking in the mirrors and choosing paints to colour their own portraits with. In keeping with the theme, they’ve had a travel agency role play and have greatly enjoyed sitting at their work desk and typing up reservations and customer information on the keyboards. They also looked at pictures from around the world and learned some new words like “statue.” The howlers enjoyed a very colourful, and occasionally bitter, spice painting session with turmeric and paprika. To get those legs going, the howlers endured an obstacle course jumping and dodging obstacles in the garden. They have had insects in the ‘desert’ (sand in the sand tray) and been doing butterfly pictures. They have been looking at pictures of holidays and making sensory bottles which they have loved shaking and playing with afterwards. They have been doing a challenging obstacle course in the garden, ribbon dancing and painting their own portraits looking at themselves in the mirror – of course the idea wasn’t to create an exact likeness!

The Baboons have been carrying on with their sensory explorations with a rather wonderfully scented, but not so appealingly colourful, finger painting session with aromatic cinnamon, strawberry and lemon. Finger paints were made out of a cinnamon paste and boiled down strawberry and lemon (to avoid the sugar rush they were advised not to chew) mixed with cornflour. The room still has a hint of cinnamon in the air! To engage their good listening skills the Baboons had a group session devoted to the sounds instruments make. They even got to watch Louis Armstrong play the trumpet on the tablet. However, they were keener to watch the violinists as they declared trumpets were noisy and gongs were a bit ‘scary’. Everybody loved the drums of course. The new Baboons who have just left the Howlers have been enjoying the addition of Mimi to the room and to celebrate she played a game of hide and seek with our fluffy bunny (not Sizzles before you worry) and practised their searching vocabulary (behind, up, down, closer, etc). Eboné also attempted her much talked about bouncing bubbles, but alas, they were just bubbles and didn’t bounce all that well – very big bubbles, however. The Baboons started to realize you can turn just about anything into a bubble wand. They dipped the stencils into the mixtures, blew from straws, and even used the rainbow blocks to wave bubbles through the holes. They have also been sorting colours with the giant garden blocks and then doing a bit of printing with them and being creative with our marbles by transporting them in the underside of the giant blocks and using the car track to balance and shift the marbles around.

The Gorillas have been talking about school and reading books in their mock ‘classroom’ in the garden cabin. They have been playing with the cars and trains and making farm animals with creative materials. They have made some fantastic mod rock globes which look just amazing. They have been using their Popoids to create monsters and have been talking on the telephones. They have been supporting the preschool leavers and spending group times talking about the things they will learn at school. The children have even been saying what they would like to learn and things they’re looking forward to like the Davigdor summer festival. The Gorillas hid cars and trains in the sand and made farm animals and scenery in their creative area with the toy ones for models to copy. They even made a bit of tea for their farm animals. In the garden they had a rolling the bracelet race on the slope and made predictions as to whose bracelet was going to go the farthest. In the mark making area they worked on phonemes and tracing their names and shapes. They also displayed some adept number skills with their “find the missing number” game. They’ve had a fabulous beach role play this week and the Gorillas have been treating Ebone who stopped by for a visit to a picnic and a splash along their rocky coastline. As usual, the Gorillas have been keeping a keen eye on our vegetable patch and making sure everything’s getting enough water.