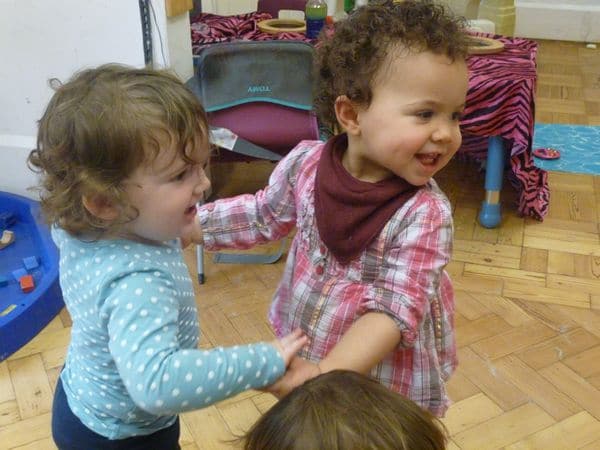 So let’s start with our little Chimps….. They sung lots of songs at group time and looked at big pictures relating to the songs whilst they were singing. Carly and Amber talked about the pictures and pointed out what was in them. They crawled and walked (well done Ruby!) along the noisy walking mat and they had a water tray full of sponges that they squeezed and squashed and drenched again and again. They did some fantastic firework splatter painting and on the same firework theme made and played with very glittery play dough. For a bit of construction practice our babies, with a little bit of assistance, made a giant ‘Mega Block’ house which they then got inside. They had a brilliant corner area full of lights and sounds and darkness which as you can see from the pictures created a lot of excitement. The team created a lovely activity where they filled lots of purses with little hidden toys for the children to find and they also read lots of little board books. in the role play area the Chimps pretended to have a campfire and integrated the tea set and food into it too. They also put on some different sorts of music and rolled over the floor and each other giggling a lot at the same time.

Our Howlers had a puppet theatre in their room this week which they absolutely loved. They had lots of puppets and both grown ups and children made up stories and little plays. The children thought they were hilarious. They had a lot of sand to dig in with buckets and spades and they also banged their collection of instruments indeed. They too did the obligatory firework splatter pictures – very colourful on black paper and they did some firework chalk drawings too. They looked through coloured Perspex to see everything changing colour and they even took these outside to see the different effects.

The Baboon talked in group time about bonfire night and all the exciting things about it including all the colours and chestnuts and the dark. They filled the sand with pretend (thank goodness) bugs and rummaged around to look for them. The Baboons did some really careful cutting of their play dough with cutters and we saw some rather impressive structures being made by some very concentrated children with Lego. Their role play area was also a campfire and they played all sorts of games with them both with and without adults. The children also adapted this and pretended that it was a bus. They made up stories of their own and pretended they were driving the bus to ‘Pirate Island’. They chatted about all sorts of things to each other on the phones nattering away about how they were etc.! In the garden the Baboon team made a fantastic obstacle course for the children to really get stuck into and they did. They got their collection of lots of different buttons out and counted and sorted them into groups. In music and movement they danced slow and fast to different pieces of music. They also had a ‘Bonfire Night Colour Hunt’ in the garden.

The Gorillas made an autumn map and then took it with them when they went on a brisk autumn walk to the park. The pictures show what a lovely morning it was, if a little fresh. They collected leaves and little pine cones and they made some really lovely hanging autumn mobiles. They of course made some firework splatter paintings ‘in the style of Jackson Pollock’ whose paintings they looked at whilst they were doing it. They talked in group time about the traditions of autumn – festivals and celebrations and the things that grow in autumn. They also read ‘Peter’s Pumpkin Story’ which they listened to beautifully. They also had other autumn stories like ‘The Enormous Turnip’ and ‘Percy The Park Keeper’ and ‘Owl Babies’. Each one provoked a discussion about all sorts of seasonal things. They made some rather intricate Lego structures and they did some mathematical stuff with autumn things like pine cones, leaves and acorns. They weighed them and compared sizes and colours and sorted them into different materials. In their role play area they had a lovely woodland area with natural objects and materials and animal masts, They sung ‘5 Little Squirrels’ to practice counting and they talked about how to care for animals and the environment during cold autumn and winter months. They had a musical corner this week too and played a phonic game where they danced around with different instruments and objects until the music stopped and then they had to put them into groups of the same initial letter as quickly as they could – pretty clever eh?

Oh, it was also Gillian’s birthday this week (she has requested me not to specify her age) and all the groups made her a lovely card and gave her a big cuddle and said thank you for making them lovely lunches every day. Just so you know after this weekend the Baboons will come back to a new 3 metre long activity bench in their covered outside area for them to get really stuck into some experiences al fresco. Should be good! Have a great weekend all.