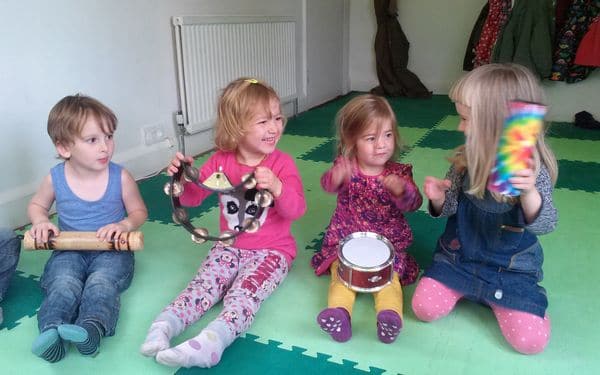 On your marks! Get set! Go! The races have begun as our little movers and shakers had a walker race through the Chimp room. The little ones were bursting with laughter as they sped along with their musical walkers as the crawlers looked on. Some were feeling adventurous and had a go against the older Chimps. Nothing like a little competition to get those legs moving. Once they were settled down from that activity, it was on to the bonfire night celebrations as the Chimps have creating sponge painting fireworks. In the soft play area, the giant spinning tent has been a constant source of amusement for the Chimps as they sought to move it around like an oversized mobile. For their sensory activity, they explored the various consistencies and textures of flour and water. They pulled out their inner Mozarts and Beethovens this week while they enjoyed the giant keyboard, completely ignoring the grownups for several minutes – something like a lifetime in the Chimp room.

Pop! Pop! Pop! The Howlers have been making some fireworks noises of their own with their popping candy shaving foam. It was a bit of an experiment as they tried to work out how to get the popping candy to make a loud enough noise. In the end they added water and Presto! Crackle foam! Of course, with all this talk of fireworks, colours have been the main focus of the week and the Howlers have been building up their repertoire of colour vocabulary. They’ve also been practicing their colours, and numbers, as they moved beads along their abacus, enjoying the sounds they made as they collected from left to right. For music and movement, the Howlers transformed into beans (yep, really) and had to copy actions – tall bean, little bean, dancing bean, so on and so forth. Like Simon says, only without the Simon. Never ones to miss a cooking opportunity, the little ones made Pizza Whirls, which we hope you enjoyed as they loving added all the ingredients and rolled them up delicately for you.

Nothing like a toasted marshmallow on a bonfire, but not without a little fire safety chat, which is exactly what the Baboons did this week in their group time area. They discussed the colours they can see in bonfires and the behaviours that will keep them safe around it. Once they were all clear on how to be safe, they made their own cotton ball marshmallows on wooden skewers for their campsite. This time around they brought along torches so they could go on a bear hunt. Pretty fearless there Baboons, going on a bear hunt in the dark of night. Also on the making table were some nifty shape rockets. The Baboons selected the shapes they wanted from felt and then lined them up for launch. They also made tissue paper collages, making trees and flowers. They must be missing all the beautiful foliage of spring and summer. The dark days have made it a lot easier to enjoy a rave up in the dance room as the Baboons explored movement using glow sticks. I know have that techno thump in my head….

Row, row, row your boat, the Gorillas have sailed out to sea to enjoy their fireworks night. How luxurious. Hope the weather was better for them than it was for us. In the small world tray, the Gorillas were provided with prompt cards to foster conversation about their own experiences as they sat around a campfire. Their sounds and letters activity was focused on their listening skills, identifying animals and their phonics sounds. There has been lots of collaboration going on this week. When they weren’t making adjustments to their role play boats, they were constructing castles and houses in the garden. For their ICT activity the Gorillas had a blast in the dance room with the coloured frames and torches. As one child shone the torch through a frame, the rest of the group had to chase the coloured beam of light around the room. Quite tiring, but I think they’ll be wanting to play that one again very soon.