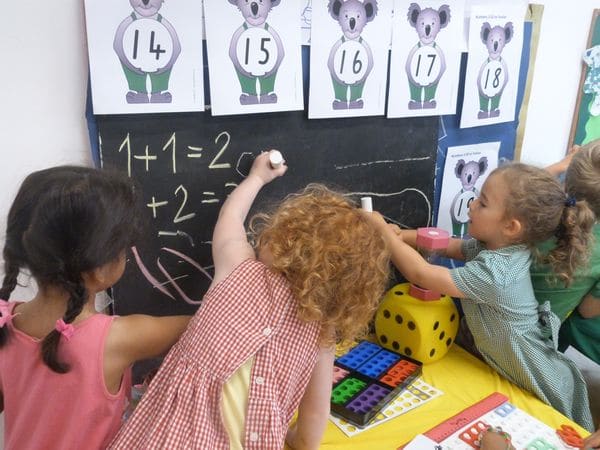 The Chimps looked at Makaton signs with animal pictures this week and did impressions of the animals and did the signs. They coloured their water with vivid paint in their water tray and loved mixing the colours and pouring the water and watching what the colours did. They made some abstract birds out of toilet rolls and feathers which are rather lovely and they made a ‘mystery maths box’ to put their hands in and talk about the numbers that they pulled out. They had gloop and coloured ice cubes in zip lock bags and they squished them around to investigate their changing texture and appearance. They had pretend fish in the water tray and they used lentils to make marks with paint on their blackboard and on the floor. They had a beach and water role play this week and bobbed around in rubber rings etc. They made stuffed pepper boats in cooking and they put down the blue mats, put on some restful music and had some lovely baby yoga sessions. They sang lots of action songs and particularly focused on row ‘Row Row Your Boat’ and they went on a trip to the beach on Friday in the buggies.

The Howlers this week have been looking at pictures of jungle animals and doing impressions of them and naming them. They have had lovely group times all about manners and sharing, waiting and saying please and thank you etc. They have had lots of dinosaurs in the sand and hid and found them, built mountains for them out of wet sand and talked about the They works of art! They practiced many a culinary technique with a few different cooking activities – they made vegetable kebabs, falafels and more kebabs later in the week. The Howlers love a cooking activity and those skills are certainly getting ingrained! They made lovely oaty play dough with the children then added herbs from the vegetable patch. The children loved pulling the herbs apart and stirring them into the dough. They built lots of constructions with 3D shapes and talked about what the shapes were. They had lots of different ICT toys out and the team modelled what they were meant to do with them whilst the children cleverly copied. The Howlers played with the new trains and train set in the Baboon Room. They measured their heights and compared each other’s and they had the weighing scales out and put pasta and rice in them and talked about shapes, sizes and measurements (in a Howler typed way). They copied the grownups when they held up animal action cards and hopped like bunnies, roared like lions and more – the children loved it. They sang songs and ‘played’ different instruments and they listened to the tuneful jolly phonics songs. They went to the vegetable patch and watered all the thirsty plants and talked about what they all were.

The Baboons have been talking all about our nursery values and also hygiene e.g. covering their mouths when sneezing and coughing, washing hands, wiping bottoms etc. They also had coloured water out in their tray and made bubbles with straws and using their fingers to pop them. They mixed up the different colours with the bubbles and used straws to make patterns. They did paintings with sticks and made some sweeping and swirling patterns. They did some number crunching on the selection of calculators and tried to copy drawing the numbers they saw on paper. They made lime out of basil seeds, corn flour and cinnamon and they loved the texture as they can squidge it without getting too messy – it smelt surprisingly good too! They did lots of choosing books and the team reading the ones they selected and they coloured using animal stencils – talking all about the animals that they created. They role played a train and train station and sang train songs, collected tickets and took luggage to places that they imagined they were going. They practiced jumping with two feet and they played some lovely games of ‘ribbon limbo’.

The Gorillas talked all about keeping healthy with different foods and exercise. They made some Lego boats and they talked again about floating and sinking. They made fluffy animals with pipe cleaners and pom poms and they made worms out of jelly and squidged them around in their hands. They played with the laptops and typed away pretending to work in the office. They read some rhythmic Doctor Seuss books (which they love) and then made up their own stories changing the names to their own. They drew around their magnetic letters and collected the right letters to spell out their own names. They role played ‘schools’ with uniforms, desks, book bags, lunch boxes, purse belts, exercise books and pencil cases and all sorts of other paraphernalia and loved pretending to be the teacher and school children. They had a black board and chalks and they enacted lessons and morning group times and register time as the team told them all about what to expect. They did this in both adult led activities where lots of new vocabulary was introduced and then the team left them to ‘free role play’ all on their own and they had really remembered all the vocab and phrases etc. They practiced their hand –eye coordination with games of 6 pin bowling. They played a lovely game where they had different cultured music and costumes and put different music on, chose a costume of their choice and danced to a style of their choice – lovely. They had some relaxing al fresco reading sessions under the trees on the hill at the back and they tended to the vegetable patch with love and care.