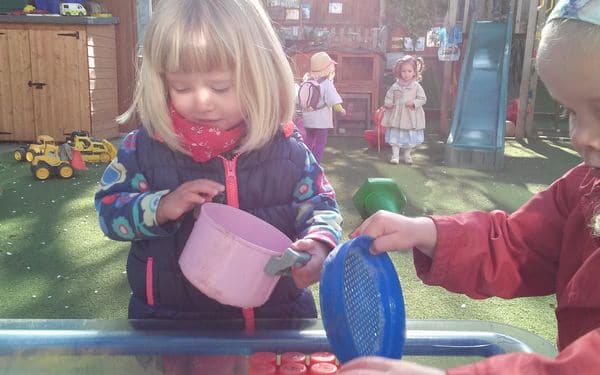 So, this week has been full of Eastery Springy activities and everyone has had a great time. Our Chimps have been singing Easter-themed songs like Peter Rabbit and I’m a Dingle Dangle Scarecrow (is that an Easter song?). They made some lovely feathery sticks and waved them around in music and movement all week. They had lots of different coloured ducks bobbing around in water and they made some beautiful Easter cards in the shape of eggs and bunny heads. They made healthy nests in a fun cooking session and they played with wooden blocks on the floor. They did some crayon patterns with their egg crayons and they had an array of bunnies out at their ‘Easter Bunny Picnic’. They hid eggs in hay in the blue builder’s tray and hunted then hid them again and they climbed all over their soft play and up their barrel ramp. They will be glad to see the back of eggs this year!

Our Howlers had a lovely time playing with coloured bubbly soapy water in their water trays this week. They also made some very pretty salt dough bunnies which they painted pink and decorated with glitter for their families. They did some fruity printing with real fruit pieces and they had lots of different handbags and man-bags out which they enjoyed transporting things around the room in. They loved going out in the garden with bunny pictures and following the pictures until they found the eggs. They did more printing with potatoes and pretended the shapes that were made were eggs. They played lots with the train track and lots of trains and they are in the middle of making a new puppet theatre which they are decorating altogether.

Our Baboons have been making up actions to the Three Little Pigs story this week. They have also been painting some rather lovely eggs on sticks with paint and glitter – they look splendid. They used building blocks to create some very impressively tall towers and copied colour combinations of other towers. They had a small world town with roads and houses and had animals in it. They had a wonderful time fitting the animals into the different buildings and then getting concerned when they got stuck! They had fairytale stories in their book corner and made up their own short stories for which they were brimming with clever and imaginative ideas! They did lots of different types of puzzles and were very proud of themselves when they completed them. Outside in the sunshine they practised their throwing and catching and kicking in a fun game of Simon Says’ and they had some lovely sessions of ‘Sandy Girl/Boy’ which is always a winner.

The Gorillas had a few very high brow times talking about Easter and how we celebrate it and why. They decorated some eggs and they looked hilarious with funky coloured hair and googly eyes. They did lots of rather impressive stickle bricks constructions and they carried on with their fabulous science lab in their role play area. There was a lot of flour around this week! They did some very clever word and letter matching and they had an Easter Egg Hunt in the garden. They played instruments in a few bumper noisy sessions and they did fruit tasting experiences too. They started to introduce our ‘Little Chef Award’ activities by making a giant food group wheel that they painted different colours and talked about different types of food. There will be lots in the planning next week relating to this. I had the pleasure of watching one of their Italian lessons this week and my goodness they were just amazing. They were having a ball and their accents are brilliant.

Sizzles got a new run this week – he now has a veritable football field to run about in and even has his own turf!

Please look out for a new section coming up in the parent portal. It is a video section that we will be adding to whenever we get a moment. There are a couple showing snippets of Italian lessons that I am sure you will love to see – the children are so clever. Also if you are interested please look out for an article in this quarter’s ABC Magazine ‘Modern Versus Traditional’ and another on school readiness coming up in the next edition.