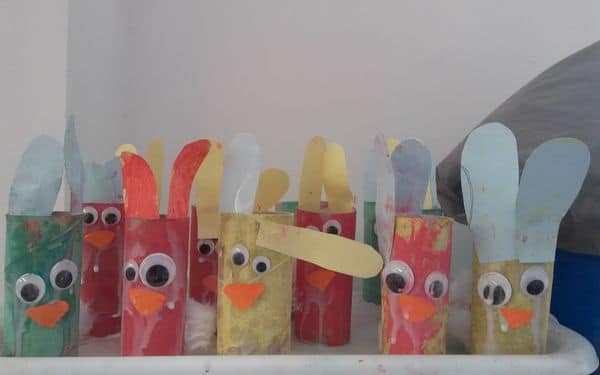 To celebrate Easter week the Chimps have donned their fluffy bunny ears and started things off with some hard-boiled egg painting. It’s going to be hard to tell children not to play with their food from now on – sorry. As well as decorating real eggs they also crafted up some paper ones with glitter and exuberant hand prints. They also banged out some beats to music during the activity. Their group time was a hidden object game…. the Chimps had to find the eggs which were hiding under various cloths in the soft play area. In their small world tray the children explored a giant bird’s nest complete with hay, chicks and feathers and have been leaving their little nest remnants around the room. As we all know the Chimps do love a bit of shape sorting so they sorted their crafted eggs into egg boxes and some of the children even remembered the places they hid their eggs the following day – cheeky little chompers. The heuristic activity this week was pots, pans and straws – however the Chimps were slightly less interested in the straws and more in banging the pots and even wearing a few of them on their heads. Oh the things you can do with pots and pans when you are a year old.

Paper plates have had a whole new lease on their inanimate lives as the Howlers created chicks complete with feathers (not just yellow for we have sourced some pink and blue chicks too), beaks, legs, and eyes. They also, naturally, decorated Easter eggs, also with feathers. They then took their birdy creations to the small world nest of shredded paper and had a grand time searching through for their eggs and mini rabbits. On the sensory table the Howlers explored seeds for the birds and a few of the Howlers made their chicks hop around and have a good old munch. Paper plate chicks get hungry too you know. Taking a leaf out of the Gorillas science-themed role play the Howlers have had a few science experiments of their own. Using milk, dish soap, and food colouring the children pipetted (that’s probably not a word) colours onto the mixture to create some rather hypnotizing patterns. With a lot of scientific pizazz the dish soap breaks down the fat in the milk making the drops of colours swirl in the mix. There’s no easy way of explaining that to one year olds so there was really just a lot of oooohs, ahhs and “I like green’s.” Their second science activity involved our food of the week – eggs. The Howlers added some vinegar to a hard-boiled egg and…waited. And waited. And waited some more until the vinegar dissolved the shell and the Howlers had a bounce of their “rubber” semi-translucent egg. Whatever will they come up with next?

Well the chicks have been chirping and the eggs have been hiding this week in the Baboons as the children prepared for our Easter weekend. They even practiced their egg hunting skills in the garden. But before that they created milk carton baskets. These were initially meant to be balloon nest baskets but the Baboons found that they just weren’t not strong enough for those robust eggs so they brainstormed what would work a little better. They did, however, enjoy the process and marvelled when the glue dried around the balloon and didn’t fall away as it was popped. Better luck next time Baboons. In the small world area chicks have been hopping and chirping away on their sandy farm. The Baboons have very carefully monitored their “eggs” and waited for them to hatch. There has also been some egg-themed math as the Baboons added and subtracted to the chicks’ numbers. Some of the children have even been using twigs to leave chick tracks in the sand. On the topic of tracks, the Baboons have been pretending all manner of animals in their role play barn. We’ve heard owls and dogs, cats and ducks, and, of course, pigs. Who doesn’t love the snort and oink of a pig? To celebrate the Baboons learned the “Easter Egg” song and counted down the bunnies as they hopped away. For a wonderful finale, the Baboons grabbed their wonderfully elaborate baskets and searched high and low in the garden for their meticulously decorated Easter eggs. Come Sunday you won’t be disappointed in their keen seeking skills.

While the other rooms have been shoulder deep in spring and bunnies and chicks the Gorillas have been submersed in lab aprons, concoctions and all things science as their role play this week was a science lab. The little mad scientists used various liquids and solids to create potions and reactions in their test tubes and trays. Using various materials (bread, food colouring, and coffee) the children made volcanoes. They came to grips with the mechanics of a thunderstorm with ice cubes, pipettes and food colouring. Then they watched raisins “dance” in fizzy lemonade. Winnie the Pooh even lent a hand, err paw, to the Gorillas’ understanding of waterproof materials. Unfortunately, Winnie’s umbrella broke and he asked the Gorillas if they could find some materials to replace it. They poured water on cardboard, plastic bags, and tissue paper, finally concluding that a plastic bag would make the best umbrella. Pooh Bear was ever so grateful for their help.