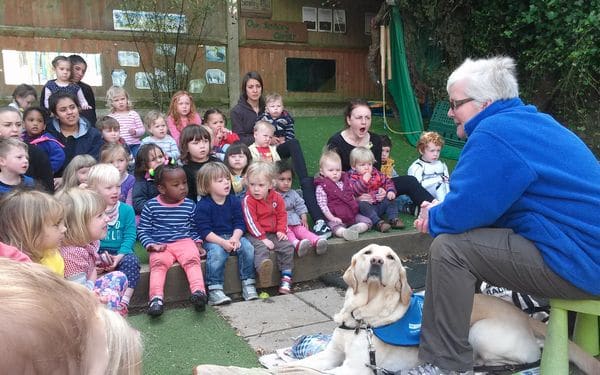 The week has been jam packed with activities starting in the Chimps’ group time area where the little ones learned, among other things, the Makaton for wheelchair and watched as the staff amusingly mimed their favourite songs. The grownups also played a joke that never gets old as they put lemon juice in their water tray which some of the Chimps did not appreciate as they took a few sneaky very sour tasting sips. They did, however, enjoy splashing about in their lemon scented water. A welcome treat for the teething children, the Chimps engaged their taste buds with fresh yoghurt and real banana ice lollies. Mimicking braille, the Chimps ran their fingers over their bumpy rice and lentil creations. The babies loved meeting Zara the guide dog – as did we all and gave her a pat for being so good.

Expanding on the sensory activities, the Howlers enjoyed their group time that was all about differences of their hair, skin, etc. They talked about not being able to see and closed their eyes whilst trying to feel their way around. Then they talked about not being able to hear andthey covered their ears. The Howlers have been exploring shells and pebbles in their sandy shore tray and have also been burying objects from around the room just to keep the grownups on their toes and in a constant state of wondering where things have disappeared to. At the construction table, the children built skyscrapers on a mirror foundation which they found quite amusing as they could watch themselves stack. Speaking of amusing themselves, the Howlers have been having a nice lounge in their role play living room complete with a TV and sofa. Obviously these modern children need no instruction when it comes to remotes as more than a few of them sat back and attempted to flick channels without adult help. We did have to remind them that the TV is not touch screen. To help strengthen those flicking wrists, the Howlers practiced their aim throwing balls into a basket at various points in the room and worked out their little fingers snapping paint onto paper from rubber bands – this is called ‘snap painting’. For one of their music and movement activities they engaged in a ‘tissue dance’. I know, what on earth is a tissue dance? Well apparently it’s a rather novel balancing game of moving around the room with tissues on their heads. The older children got the hang of the game quite quickly, while the younger ones seized the opportunity to clean their faces and toys – basically a win, win for everyone.

The Baboons have had a very interesting week as they have been blindfolded on numerous occasions and had to rely on their senses to get them through. First was the taste test, which was an entertaining thing to watch as the Baboons tried blueberries (yay!), salt (bleurgh!) sugar (double yay!), tzatziki (ergh?), vegemite (mixed crowd) and a seemingly never-ending list of produce and condiments. They also went on an object search in their room with only their ears and hands to guide them as they were blindfolded and had to guess what the toys they found were. At the creative table the Baboons found painting with their mouths both frustrating and hysterical. They did a lovely activity with Demi to test sound waves with salt, wax paper and a stereo and they had some lovely watering sessions in the vegetable patch. Their persona doll paid a visit in a wheelchair with the help of Irene and they talked about how it must be for him at school not being able to walk – they just love that doll.