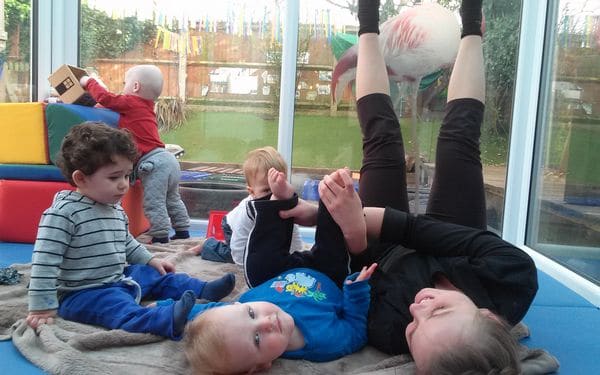 The Chimps have been glub, glub, glubbing with all the slippery fish this week as they explored their slippery fish discovery bag. They even created fish tanks using gloves and Ziploc bags. The sea animals were swimming around the shredded blue paper in the sensory tray and the Chimps had a whale of a time (I know, I’m terrible) fishing them out. Carly and the gang even showed them how to fish with fishing rods. Their yoga session was a rather relaxing fare as they listened to the calming sounds of the ocean. Maybe not the dolphins. They don’t sound very calming. In fact, they sound a lot like Chimps. Paco has been demonstrating the ukulele and a few of the Chimps have showed off their strumming fingers. Their sensory activity was a mix of dry sand and wet sand and the children really took to mixing as much of the sand as possible so they could squeeze and squelch. Yuk!

Well your little Howlers’ legs have had a full workout as they have established a lovely routine of walking up the stairs to have music and movement sessions in our new dance room. Monday was Australia day and all week they have been up there watching aboriginal videos and mimicking dance moves as well as trying to make their own didgeridoos. For designing and making, the children had a choice of materials to decorate their leaf prints. There are some new Howler faces in the room so the gang showed them how much they love cooking. This week they made potato latkes (a polish dish) which required a bit of potato shredding, a bit of onion chopping, and then some potato shaping. Good thing they spend so much time with playdough. This was a walk in the park for them. On the exploratory table was an assortment of natural resources and the children got quite creative with their activities. Some stacked, some sorted, some just emptied the box so they could climb in and have a snooze. Their book of the week was “Hooray for Fish” and a few of the Howlers have been relishing their new words, like ‘coral’ (coral is apparently a great word). The Howlers drove pencil cars around their papers (or room) since the grownups taped them to the hoods and bonnets for a mark-making experience with a difference. The block towers may need height clearance soon as there were some colossal stacks on show. In the sensory tub it was all a bit slippery and blue as they Howlers made their own soapy sudsy mixture. And they threw in a few ducks for good measure. Quack! Quack!

It’s been quite a hodge podge in the Baboon room and everyone has enjoyed a little something different. In the sand tray, a few of the Baboons used paintbrushes to draw faces which then turned into a numeral and numicon identification game. At the creative table all those toilet roll tubes have been put to good use as they made tube prints. The small world area was a town of cars and there was a sneaky bit of drag racing. Of course, they were advised of road safety and the importance of seatbelts. The Baboons had a very special treat as Mimi introduced them to Mike, the persona doll. They were very keen to talk to him and wanted him to stay. The persona doll, if you’re not familiar with them, is a very useful tool in supporting children through transitions and discussing topics of interest and importance to them i.e. going to school, new babies, etc. Mike is the same as the Baboons and will visit them from time to time. Not only did they make a new friend, the Baboons also went to the jungle this week for their yoga session in the dance room. They had to pack their bags, prepare their lunches and listen out for all the jungle animals they might hear or see. The pom-poms were out this week, but instead of being glued to paper, the Baboons played a maths game. They had to add pom-poms to a tin and then subtract them. They caught on quite quickly and then took to subtracting the pom-poms in hard to reach or spy places around the room. They haven’t been seen since. Oops.

Have your passports and boarding passes ready – the Gorillas are ready to board! This week has been all about logging up air miles in the role play area as the Gorilla pilots and passengers jet setted all around the world using their map and globe for guidance. They even had walkie talkies for those can’t wait till I see you alerts. In the creative area the Gorillas have stepped up their printing skills by creating animal figures using various objects from around the room. In the maths area, the Lego lovers got a treat as they had lego people were trapped inside shapes and the Gorillas had to find the corresponding shape and colour to release them. Not to worry, they’re all very good at this sort of thing. This week the Gorillas have been focusing on keeping themselves safe and as they have been flying planes. There was a lot of talk about wearing seatbelts and making sure all eyes are on the road…or…sky. Speaking of safe – they have also been talking about how to keep their teeth safe from cavities and bacteria and have been rather enthusiastically brushing their teeth and sharing their own teeth time rituals with their friends. For their cooking activity this week, they made smoothies using fresh and frozen fruit. To exercise those fingers (and keep them still for a few minutes), the Gorillas made pasta necklaces. Not massive penne pasta necklaces but very teeny tiny macaroni necklaces, which had its challenges, but the children persevered and have some lovely jewellery to show for it. In the dance room they have been connecting sounds to movement: bell=jump, drum=stomp, jingly bells=lie down on the floor and shake your legs. Fabulous.