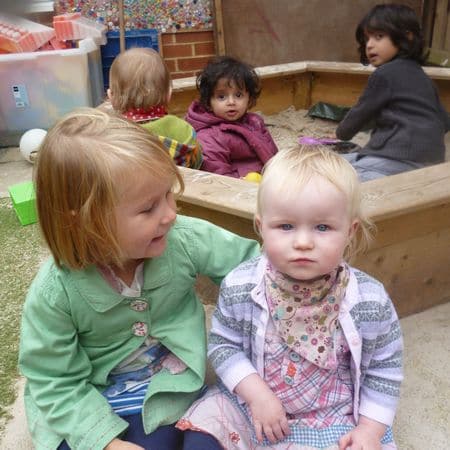 The Chimps have been having a blast hiding and finding all sorts of squeaky toys around the room. They have also been crawling up and down and bashing the walking mat which makes all sorts of different noises with pressure. They made all different shaped and sized multicoloured ice cubes and they felt them, played with them and watched them melt and all their colours merge into one. They have been practicing animal noises and pretending the soft farm animals have been going to sleep and eating etc. – the very beginnings of role play the clever little things. They have been making a right old noise with lots of different types of drums. They built towers and knocked them down again with foam blocks, and made dish soap foam’. They also made and ate some carrot and pea puree. How civilized.

Our fabulous Howlers had an equally action packed week. They have been painting balloons all sorts of autumn colours and using them to paint leaves. Novel but true. They also had play dough separated into all different scents and smelled them, merged them together and tried to eat them (they didn’t don’t worry). They had lots of physical play inside with their cow bouncer, walking sound mat, the seesaw and tunnels. They had 3 big old heuristic play sessions which they got really into and concentrated for ages on turning, opening and fitting things into each other.

The Baboons as usual have gone science crazy. This week they have had a brilliant science lab in their role play area. They have been counting and sorting and cleaning coppers with vinegar and salt and then watching them turn blue in a bowl of salt! They have been driving cars around a small world garage and making roads for them all the way around the room. They decorated their very own giant scarecrow for their upcoming autumn display board. They have also been talking about autumn and how everything looks, what we should wear and the amazing changes it brings. The creative Baboons also did some cooking. They cooked ‘Welsh Rarebit Muffins’ and ate them for snack. They had lots of fun as they always do dancing to their favourite action songs in music and movement.

The Gorillas did so many things we need to pick the highlights. They made some really fantastic cheesy savoury biscuits and rolled them out really carefully and showed them to everyone who came in the room. They pointed out where they live and talked about different countries with the light up globe. They did some really careful cutting out of old photographs and they did some great collages. Cristina had a really sweet idea and it worked really well – she cut out lots of different garments of clothing with paper and made a mini washing line with mini clothes pegs and string. The children dipped them into different dyes, hung them up to dry and then used them to make people collages. So effective! They had the giant bricks inside, did lots of tracing of letters and words and they made their very own giant road to drive their cars along. They had tango lessons with Cristina and Irene and lots of other dancing lessons too. They are just loving copying musical movements and actions at the moment. They have also been doing their phonics and making intricate patterns with our thousands of pegs and peg boards. Fabulous.