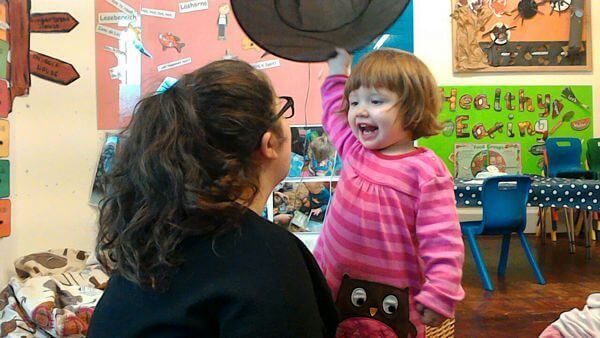 This week, the Gibbons have been using their natural materials to do some print painting. They observed the effects of painting with a variety of objects including conkers, pine cones, sticks, and leaves. Their colour scheme was autumnal red, yellow, and orange and they worked on their dexterity as some of the children opted to use paint brushes rather than just dipping their items in paint. The Gibbons amped up their colour knowledge with a splatty game of hide and seek the colours. Cotton pads were placed over blobs of paint and, using a toy hammer, the children hammered on top of the cotton pads. Sounds invigorating. Their story bag for the week was Dear Zoo, practising saying their animal names, using Makaton, and remembering what objects they will find in the sack. If you don’t have a poppy for Rememberance Day, the Gibbons will be making poppy crackers with jam and raisins (those won’t make it till the end of the day) as well as paper plate ones. Those will definitely be a taker homer.

The Baboons have been doing some team building, and creating dens in the music and movement room. Using the parachute, blankets, cardboard tubes and pegs they even created their very own bandstand so they could play instruments underneath. While the parachute was out they made use of the time and played some games. They were tasked with keeping the ball on top without it falling, running underneath, rolling the balls across to each other, and responding to each others names by swapping places. Not all at the same time, though that would be pretty awesome to see. In the small world area, the Baboons continued their construction skills with wood blocks and people in the sand tray. They made enclosures and houses for their people to go in, under, and balance upon. Not sure how well the townspeople faired balancing on their houses. For the counters, the Baboons have had real money and the till out, sorting, counting, and chucking (we love that one).  For their poppy craft, the children observed photos for reference and created poppies with sponges and paint.

This week, the Gorillas have been writing letters from their names with the chalkboards in the writing area. Some are already itching for reception as they took the chalkboards to the role play area and pretended to be teachers. Also in the role play were a few doctors. They must have been alerted to our current illnesses and have come to ensure everyone is getting the right care. They’ve even been giving each other injections and talking about their real experiences of going to the doctors. In the creative area, the Gorillas have been using the junk modelling materials to create monsters. For some reason, the Gorillas are always seeing monsters in the garden that the grown ups can’t see, so they were making them a little more real for those of us whose eyesight isn’t the best anymore. On Thursday, the children had their weekly Nature Kids trip and continued getting the allotment all snugly for winter. Along their travels, they ran across a man and a cow. No, that’s not the beginning of a story –  they also planted broad beans, after sorting the soil first to take out the lumps and rocks. They also did some forking and raking and filled the walk path with woodchip. Phew. No lazing around at Young Friends!