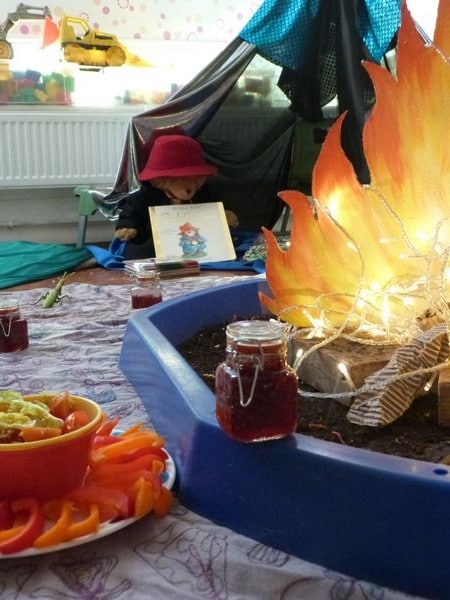 Poor old Carly has broken her foot so our Chimps have very carefully crawled around their injured leader while she still led the week (well most of it) through some exciting activities. The 3 Little Ducks have waddled their way into the Chimps’ water tray and some of the youngest ones have been learning about object permanence as those pesky ducks kept disappearing and coming back – ducks do tend to wander after all. In the sensory tray the Chimps have been exploring sound by banging rocks together and also exploring the feeling of sand, seaweed and stones. Getting ready for warmer, sunnier days the little ones ‘designed’ sun hats to go with their wonderful beach role play. A few of the chimps have vanished inside the rather large sombreros so the team have had to keep a look out for phantom hats crawling around the beach of their own accord. Also, but please do not fear, the Chimps do seem to have a pet shark on their beach into whose mouth they post fish. Fearless. In the ICT area the Chimps have been chasing after crawling toys and pulling along a few that need a little help. They have also been working out their little fingers with zips and buttons and clasps on purses. For music and movement, the Chimps have been flag dancing…as everyone knows you do on the beach.

Never to be outdone the Howlers played host to the Baboons for a World Book Day story around the campfire. And my goodness it was completely beautiful as you can see from the photos. Both rooms made their very own snacks and jams including pickled pears and lemon cordial in preparation for their special story and a snack time. While in the campsite, the Howlers have also been talking about the different insects they might find in the forest. The sand investigation this week was quick sand and disappearing coins. Armed with a whisk, the Howlers whipped up a batch of soapy slime using soap flakes, water, and food colouring. They had an absolute ball! There has been lots of construction in the small world area with beans, sand, rice, and lentils being scooped up by very well manoeuvred diggers. In the garden the children worked on their breathing technique as they were tasked with blowing the biggest bubbles ever in the bubble tray and they certainly rose to the challenge. For group time the Howlers have been working on their happy faces using our multicultural emotion cards and emotions books. Happy faces certainly aren’t that difficult for these little cherubs.

The Baboons may be missing Mimi this week but they have been enjoying introducing Demi to all their Baboon ways. First they have been getting very chatty about tooth care as they have been learning the tooth brush song on the tablet and sharing their morning and evening brushing rituals. The second instalment of the spring board art has been grassy hands…or handy grass…. Either way, the children made green handprints and some of the more observant Baboons started comparing their hand print sizes with each other. You may have seen some squiggly red spaghetti worms in their sensory tray, which also needed to be fitted out with a dustpan and broom as those messy mini beasts kept tromping soil through their room. Some of the Baboons discussed “life under the soil” like little mini beast experts – methinks an expedition is in order. Because we always love to see their expressive faces when they eat things for the first time the Baboons had a tasting session with their raspberry and plum jam – which they made for their book day campsite snack. They also tasted tahini, cheese, and of course that old favourite for an instant funny face – lemons. The Baboons talked about where their ingredients came from and what everything tasted like. If they didn’t know the word for sour their faces certainly knew how to show it. Quite a few of the children are potty training so they have been reading all about a pirate who is struggling to learn how to use the potty. A bit late for all that I think. You’ll be very pleased to know how helpful all your little Baboons are as they have been thoughtfully giving the pirate potty advice – like sitting down, wiping his bottom, and washing his hands. We’re sure you all loved your sensory bottles the children made for you. To make them the children were provided with a varied selection of materials to choose from including salt, coloured sand, beans, glitter, and cut up straws and pipe cleaners. Using spoons and some very concentrated faces they shoved or poured their self-chosen ingredients in for your special sensory treat. Lucky you!

This week the Gorillas have been moving through their role play city complete with their very own life size car – originally made by the Howlers. I’m sure they have reasonable rental prices. The city is a work in progress and the children took a trip out of the nursery in order to take photos of the local area to decorate boxes and add to their city landscape. Indoors, the little builders have had quite a workload using junk modelling to construct a café plus landscaping their very own garden. You just wait they will be redesigning your houses next. Speaking of houses, their group time topic was all about the different types of houses people can and do live in. They were pretty amazed by igloos and real tree houses. Feeling inspired, they created their own homes which resembled skyscrapers with lots of windows and there were even a few houses with wheels like a train, so they said. Who wouldn’t want to live in a train? Well, maybe not everyone, but I digress. The children listened to the story of Moon Rabbit who lives in a city and the Gorillas compared the photos they took on their trip to Moon Rabbit’s city. In other areas of the room the children have been practicing their cutting skills and quite a few of the Gorillas put even our circle cutting to shame. As part of their Italian lesson which happened to fall on World Book Day, the Gorillas were treated to a very Italian version of Pinocchio which included some new words such as “bugia (lie),” “squalo (shark),”and “legno (wood).” Afterwards the Gorillas also created their own versions of Pinocchio with paper and felt.

Strange at nursery with small amount of key workers kids but today joy was had as we let the rabbit and guineas loose in our woodland garden with the bees and butterflies #animalsexploring #lookingafterchikdrensmentalhealth #snapforchange ... See MoreSee Less

Charlotte Cowlin imagine if we could 😍

Good morning everyone. So its the start of a bizarre phase in our nursery careers. Many of us are opening for a small group of children (it'll be lovely to see them won't it?) and still waiting for definite news of support, insurance policy clarification and more. So many uncertainties. We are having to watch the pennies - reuse, up-cycle and use things to the end. Even though this is emotional and hard, this has to be the start of a new more sustainable way of life. Lets practice now and carry on forever. Because we're having a taste of life when it goes a bit wrong - lets not let the next one because of climate change because that will be a lot more permanent. Chins up everyone. Lets support each other through this time. Stay in contact and let us all know how you are doing. Much love x ... See MoreSee Less

Look how many plants were planted by Ben our gardener today! All native woodland plants getting used to their new home #wishingwedidnthavetoclose #biodiversity #nectarforbees #naturelovers snapforchange ... See MoreSee Less

Wow that has changed so much looks lovely

Interacting with natural environments allows children to learn by doing and experiment with ideas. Nature provides endless opportunities for discovery, problem solving, creativity and stem education and this is why we LOVE being outdoors! #outstandingchildcare

This error message is only visible to WordPress admins