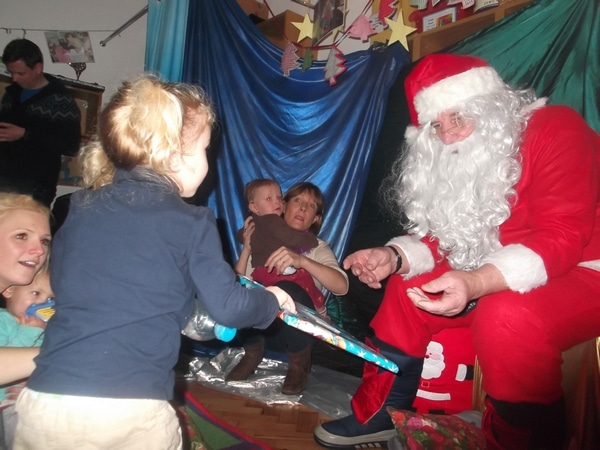 The little Chimps have been playing with all sorts of shiny bracelets and other jewellery in the sand – pouring it through, dragging to make patterns etc. Sometimes the sand was wet, sometimes dry to make all sorts of effects. They have also been getting messy and totally fascinated with the strange texture of cornflour. They have been doing some really pretty Christmas pictures and rolling all different sized balls to eachother and the grown-ups. They had the cutes Christmas party with the Howlers, which was a good deal less roudy than that of the cheeky Baboons and Gorillas. They have been jingling along with bells to their Christmas music too.

The Howlers went on an outing to Palmeira Square to see the big Christmas tree. by their own admissiontthis may have been more exciting at night time but they had fun anyway. They have been making treats for their families – peppermint creams and rice crispie cakes (a special Christmas break away from our usual healthy cooking) and playing with their dinasoars in their sand tray inside. They have been doing lots of dancing (we think those of you who were their will agree that their dance practice was more than evident during the dancing competition at their Christmas party on Thursday!) and singing. They have also been looking at pictures and reading all about Father Christmas to get them in the festive mood and to prepare them for meeting the man in red at their party.

The Baboons have bee getting very excited about Christmas. They sat beautifully for ‘The Night Before Christmas’ which was a surprise and have watched a bit of ‘Santa Claus The Movie’ to get them in the Christmas mood. They finished making their wonderful and beautiful stockings and have made fantastic paintings with Ebony out of puffy paint. Ebony is an advocate of ginger bread it appears – she made some actual ginger bread houses for the staff (they were amazing!) and she also made ginger bread men with her Baboons. They have been dancing away and playing multicultural instruments and pretending to put nappies on babies and playing with all sorts of things in their sand tray. Phew! And all this apart from their very exciting Christmas party!

The Gorillas have been getting the most excited of them all as we are sure you can imagine. Goodness! They have been watching bits of really Christmassy films some afternoons (not for long, just to get them tingling with Christmas excitement) and singing lots of songs. They have been weaving Christmas calendars and decorating their decorative clay hands for their family trees. They have been listening to ‘The Snowman’ music and generally working themselves into a Christmas frenzy.

Every group had a really lovely Christmas party that we know many of you came to. We really tried to make these as fun as possible for the children and we think they had a lovely time. However we have decided to do away with the Gorilla and Baboon parce the parcel, which we admit was a bit lengthy for so many children! They all met Father Christmas and got a lovely present and sang some more Christmas songs. Not too many people cried at the site of the man in red which was good too! All children had at least one roast Christmas lunch complete with crackers, hats and all the trimmings cooked by Gillian and Stephanie that did everyone proud.