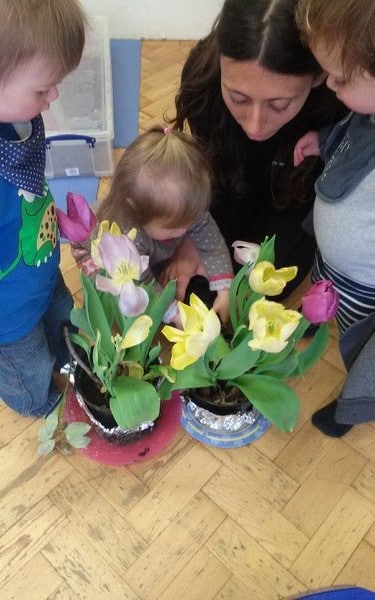 Our fabulous Chimps this week have been singing an array of counting songs and doing actions to Three Currant Buns, 3 Little Speckled Frogs and more. They have been pushing lots of different ducks around their water tray and making lovely hand print mother’s day cards (oops sorry mums I have let the cat out of the bag). They have been building with giant mega blocks and playing with some rather crazy things that Maria brought back from Italy called Crystal Balls – they are inflatable floppy things that blow up into amazing glittery balls. Pretty fabulous and apparently a common sighting in the playgrounds of Italy! They looked at lots of soft story books and did lots of rolling balls through half and full drainpipes – amazed every time when they come out the other side. They had a lovely time with their extensive collection of sensory bottles, shaking them and watching the different bits and pieces bob about. They painted some very beautiful flowers for their new spring display.

Our Howlers have been searching for mini beasts in the nursery garden and then learning the importance of washing the germs off their hands – very important. They did a lovely activity – Japanese Blossom Tree Painting – wow. They made shakers out of bottles and rice and looked so sweet as they ever so carefully poured it into the containers and proudly shook them about. They did some brilliant cooking this week – first they made mini vegetable quiches which looked and smelled delicious . The children loved cracking the eggs, mixing it all up and helping to cut up herbs and smelling the different spices. They built towers bigger than themselves with the giant bricks and they made some harmonious (hmmmm – debatable) music on the keyboards whilst wobbling along to the alphabet song, among others. They talked about pets and looked at lots of pictures of different household animals and how to look after them. They went to see Sizzles our nursery rabbit and fed and watered him and put him in the run and talked about how they look after him and all the things he needs to be well and happy. They talked about spiders and looked at pictures and they drew webs with white chalk on black paper. With the Howler team they drew on the paving outside and the children jumped from segment to segment in the sunshine. Lovely.

The Baboons have been having a fabulous time with bubbles this week and have been really good at blowing them on their own. They were running and jumping about trying to pop them with their index fingers which was quite a funny sight. They made paint-ice-blocks of all different colours and really loved experimenting with these, rolling them about and making dots and lines. They listened to the planet song and sang along with it on the computer – they love that song! They put the train track together all on their own and played with it together in a very focused manner. They played Simon Says and were absolutely immersed really concentrating and following all the instructions. They practised animal noises and had a camp site for their role play. The team played them some camping videos too and some quite eloquently recalled camping experiences of their own. They read an enormous copy of ‘Guess How Much I Love You’ and copied the actions of the characters – stretching out pretending to cuddle etc.. That really is a lovely book (thank you Toni who brought it in from home for the children). They made vegetable and cream cheese wraps and talked about the array of vegetables, spread the cream cheese on themselves and wrapped them up really carefully. They had a lovely time in the garden this week as ever and especially enjoyed the sandpit.
Springtime Adventures:
Our very clued up Gorillas furthered their investigations of the body this week. They talked about the heart and how it beats and that it beats faster when the children run about. They made some beautiful mother’s day cards (well except Declan who asked Lottie to do it for him because he was too busy playing – sorry Lucy but it was very funny!). They used lovely coloured tissue paper to make flowers and chose the colours they thought their mummies would like the most. They had the rainbow cogs and wheels out, making long tracks around the builder’s tray using all the pieces – they had a lovely time spinning the cogs around and watching the whole line move. They talked about and investigated radios and how they work and practised using the CD player. They had the babies out and extended this activity by dressing up the babies and pretending to take them on train journeys to different places, complete with backpacks and other paraphernalia. They managed to join this idea with their summer role play garden and made up all sorts of stories. In the book corner they introduced a bird theme that will run in detail over the next couple of weeks by looking at books about birds and insects and talking about what they look like, how they move etc. They did lots of representative play with play dough by flattening it and pretending it was cakes and pies and then putting it under tables pretending they were ovens and then using the sand timers to time the baking. Their role play area was an absolutely beautiful summer butterfly garden which the Chelsea Flower Show would have been proud of (well done to the team). They practised grouping and counting and sizing by lining up and grouping different objects including our counting bears. They did lots of climbing and jumping outside in the garden and have loved our new decked area which they have been using as a stage.

Have an amazing weekend everyone and Happy Mother’s Day to all you amazing mums – we hope you get treated as well as you deserve this Sunday. See you next week x