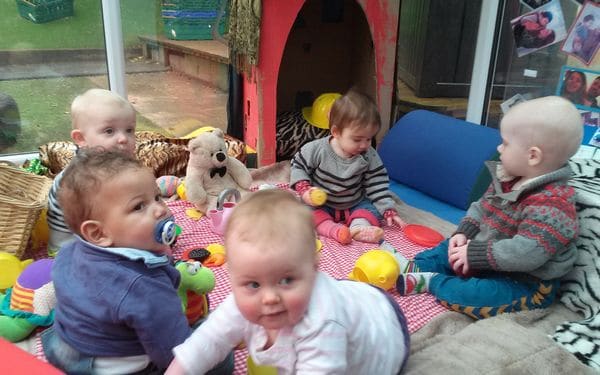 It may still be a bit chilly for water play outside but the Chimps have been having all manner of fun with it indoors. Their group time focus this week was the song “Tiny Tim” about a turtle with bubbles stuck in his throat. The Chimps exuberantly popped their imaginary bubbles and practiced their “pop, pop, popping” sounds – which was a good thing because the real bubbles in their water tray were tricky little things to catch. Something else that was a tad difficult to grip were the apple boats complete with flags and sails. Some of the Chimps didn’t feel these sails were necessary so used them to poke and prod the bobbing apples. You would be amazed how engrossing apples bobbing up and down are. Once they were all dried off it was time to explore their small world tyre (yes tyres) which were turned into a dinosaur park complete with gigantic spiders (well they were gigantic in relation to the rather miniature dinosaurs), natural resources, and sea creatures. It was so beautiful to look at a few of the children just stared. And stared. Must have been awesome to stop a Chimp in their tracks. Their mark making activity involved drawing on Ziploc bags filled with cornflour which got far more interesting once the team added colours to the bags. Why wouldn’t it?

The Howlers have started summertime fun early with a campsite role play area complete with camping chairs and tents. The chairs have been particularly good for supporting turn taking – or not as was occasionally the case. Since they have spent a couple of weeks turning over the soil in the vegetable patch they have also decided to add a few things for the birds to eat, or hopefully deter them from picking around our vegetables. Using bird seeds, bread and plastic bottles the Howlers made bird feeders for the garden. Using some slightly different seeds the they made seeded oat cakes for some camp site snacks. They have been provided with not one but two wondrous habitats for the children to explore….In the sensory tub was a water-bead-filled pond complete with lily pads, ducks and frogs. The children quickly discovered that the water beads bounce so the ducks weren’t so much swimming as dodging bouncing beads. Poor duckies. Well, the pond frogs were accompanied by the Howlers paper roll tube frogs adorned with legs and googly eyes. They even did frog impressions while they worked. I suppose they are too young to whistle. Their second landscape was more of a playscape as dinosaurs roamed a rocky and sandy terrain and then cooled down in the water bead lake. Even the dinosaurs get spoiled in the Howler room!

This week the Baboons have been getting to know their vegetables as they have had both a pizza making session and a vegetable printing activity. For their pizzas they practiced their cutting and grating skills – while taking a few sneaky chomps of the produce (they thought we didn’t see). Unlike some of their past food creations they were a bit more eager to eat these for their snack. Yum! For printing they used broccoli, peppers, and oranges and cut them into the shapes they wanted for their prints. The Baboons are getting their new spring themed board ready and this week they started painting blossom trees. Some of the children paid particular attention to the amount of paint they used as it created thicker blossoms. This week the cars looked like they had not quite made it through the car wash as they sped through shaving foam streets and tunnels. The little shoppers had a blast this week in their grocer’s role play and your Baboons run quite a premium service – personally helping each shopper, putting things in their baskets and trolley, helping them find their money in their purse and more. Some of the children have been starting to spell their own names using the alphabet magnet boards while others have been making alphabet soup with said magnets. For a counting activity with a twist, the Baboons enjoyed the gloopy glory of quicksand, searching for disappearing marbles in the sand tub. After the marbles the poor animals in the farm had to be rescued as some of the children were mesmerized by the slow sinking.

The Gorilla sea world has gone out with the tide and the jungle has taken over the role play area. As ever there has been plenty to do. Some of the children went on a jungle tour in their car, pointing at the cheeky monkeys, while others put on animal masks to scare their friends in the car with a great big lion roar. So the Gorillas weren’t caught out by any wild creatures they made binoculars from tubes in their junk modelling area just in case they needed to spy something from afar. Using less junk and more malleable stuff, the Gorillas made a jungle landscape using broccoli, twigs, playdough and leaves. They spent time talking about the jungle habitat and what kind of plants and animals they might find. The team explained a little bit about how hot and muggy the jungle feels but might have to wait until those one day only summer heatwaves to illustrate the point. In the writing area, the Gorillas traced flashcard animals, copying the text and the animal shapes. Some were very creative and decided each letter needed its own colour. Their Italian lesson this week focused on colours. They practiced the colour names and then Maria asked them (in Italian, naturally) to find objects in the room with corresponding colours. For their phonics activity, Cristina and the children played a game of ‘phonics bingo’, focusing on the letters A, S, H, T, P, E, I, and N. The Gorillas held up their animal cards when they saw the letters in their animal’s name. In the book area, the Gorillas have been reading “Blue Kangaroo” which is all about a little girl who blames everything she’s done on a blue kangaroo. The children spent time talking about taking responsibility for their actions and not blaming the poor blue kangaroo.