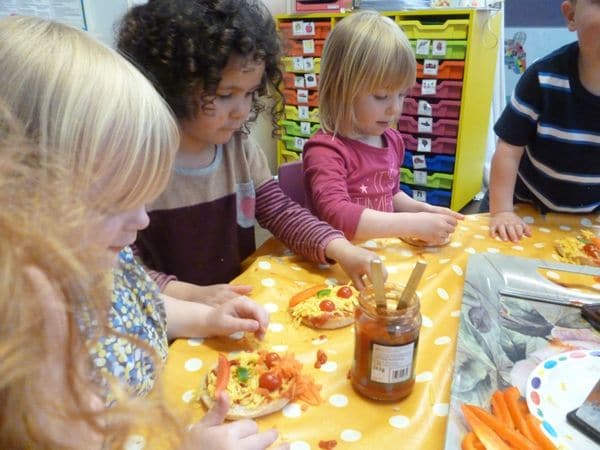 Our baby Chimps this week were singing songs in different languages – well they enjoyed the staff singing them anyway. They did painting and blowing the paint with straws and they loved the texture as they made patterns and covered their hands in shaving foam. They had a selection of different pots and they practised putting objects inside and fitting the lids on. They had a lovely time playing with their large selection of sensory bottles. They loved reading books on new babies and pointed out the babies in the pictures. They copied movements from action songs and they created a hide and seek game with the doll’s house and dolls. They played peek-a-boo as they found the hidden doll. They used sand mixed with lots of water to create a gloopy mud which they loved letting drip off their hands. They practised their physical skills in their conservatory and on their slide in the garden and they had a lovely time being looked after by our ever nurturing Gorillas.

The Howlers this week were talking about fruit and vegetables. They made lovely smelling (and looking) stuffed peppers to take home for their families. They chopped, mixed and stirred all the vegetables together and practised the names for all the actions and ingredients. They had an amazing time (and so did the Baboons who came in to have a look) making giant bubbles. They created the perfect solution and filled up a builder’s tray then dipped a hoop into it and lifted it to make the best giant bubbles we have ever made. This will now be a staple nursery activity as it was so exciting. The children even stood in the tray and Irene and the team lifted the bubbles around them – it was the talk of our household on Thursday night and I’m sure it was the talk of a few others too. Ebone has lots of fantastic bubble activities up her sleeve for sunny nursery days in the garden so watch this space and take a look at this week’s photos for evidence. Back down to earth the Howlers played lots of tapping copying games this week with their hands and different implements and listened to music at the same time. They had a very concentrated and investigatory Heuristic Play session and they were totally gripped by another one of the Howler famous puppet theatre shows. I saw it and it was great. They did lots of planting seeds too – they filled up the pots with soil, placed the seeds very carefully and watered them – learning lots of planting words at the same time.

The Baboons investigated marks in sand this week making different tracks in the sand and patterns. They made their own play dough and made all different things of their choice whilst practising their creative/malleable words (knead, roll, flatten, twist etc. You get the picture). They used stickle bricks to make all sorts of things too and were very proud of the aeroplanes that they produced, and rightly so – they were pretty good. This instigated lots of role play as they flew them around the room and stopped at airports etc. They had a role play office this week and used it for representative play – they joined it with wooden blocks that they pretended were mice, calculators etc. Brilliant. They rolled a ball to each other across their round table and they practised ball skills too with an exciting game with our parachute outside. They adapted their planned activity of sorting pasta into shape categories by making necklaces with the penne pasta, decanting it into containers and pretending it was ice cream. They had the baby equipment out too and the babies were treated like royalty. They made aromatic scented foam with different spices that also dyed the foam different colours which the children found fascinating. They also did some funky looking prints with different coloured paint and bubble wrap.

Our grown up Gorillas had an action packed week too. They made some rather brilliant and very tasty mini pizza faces with different vegetables. They made crowns, decorated them and wore them in their fantastic role play castle as they pretended to be a (not ‘the’) royal family. They did string painting and hand printing and they threaded pipe cleaners very cleverly and carefully through paper – they loved this and produced more and more throughout the week. We now need more pipe cleaners! They used our phone collection to role play talking to their families and friends on the phone and had some long and open ended conversations. In their small world area they had little people, furniture and our castle. They also had lots of fairy/princess/kings and queens books for them to look at, read and get ideas for role play. They played a lot with the Numicon set this week too making patterns with the shapes and talking about odd and even numbers. They made robots out of Popoids and had different shaped cutters in the sand and talked about the names for all the different shapes. They had circle time discussions about all the different ways we travel and which transport they have used to get where. They talked about school and what it is going to be like and they read stories about children going to school.

We are about to create an area dedicated to school for the school leavers. There will be uniforms, excercise books, lunch boxes, book bags and much more so the children can really get used to what they will see and do and so they can get excited about it. We are gathering the bits and bobs now and it will be in effect in the next week or so. If you have anything you think might be useful all donations would be gratefully received.