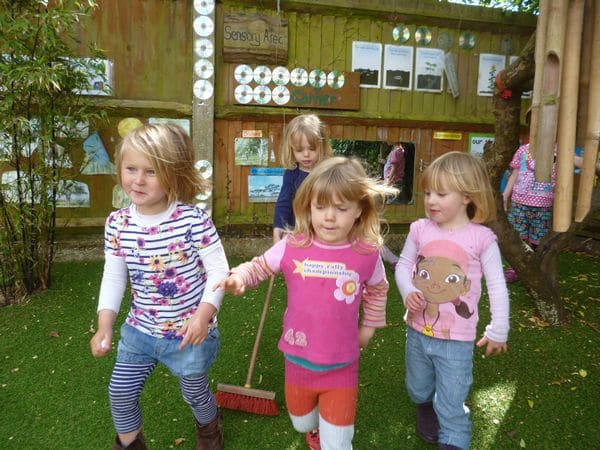 These girls have certainly got somewhere important to go – wow.

This week has been an abolute pleasure at Young Friends. The team and children have been happy and relaxed and the children have been engaged in interesting activities everywhere. Their new sports equipment saw lots of action in the garden too….

The Howlers have been painting with bunches of celery and flour (they looked beautiful – who would have thought bunches of celery could produce such unique patterns and shapes?) and doing salt drawings. And no, before you email in a complaint those two activities were not the result of a refusal to buy them paint or brushes… They have been telling stories and doing narrative yoga positions to accompany the story – they loved this activity. They have been playing with muddy looking cooked spaghetti and pretending it was worms in mud. They have been reading books all about families and looking at their family pictures as discussions were instigated. They built lots of towers with blocks and proudly looked at how tall they were. They have been hiding teddy bears around the room and looking for them – endless fun. They have been doing string and foil art too. They created sinking sand and loved making marks in it and marvelled as they watched various objects sink and disappear. They talked a lot about gardening and have been gathering seeds and pots so we can start lots of planting next week.They have also been singing songs about shapes and recognising shapes as they wobble around.

The Baboons have been talking all about seasons this week. They have been pouring water into jugs and cups in their water tray and endlessly transferring from one container to another. They have been using (pretend) dinosaur feet to make footprint paintings which was a great way to get the boys excited about painting (good idea). They have been doing some really lovely stained glass windows for their conservatory which look lovely. They made some tissue paper ‘tree’ collages and of course watched the glue being poured to almost hypnotic effect. They always like playing with the glue more than the end product don’t they? They had many different shaped sponges which they used to do some rather exciting paintings and certain boys thought it was great that one of the sponges had the shape of a monster on it. Again – great ways to get the boys excited about different activities. They carried on with their garden centre role play area and extended this by choosing seeds to plant, filling their own pots and planting their first seeds of the year. They have been developing their counting skills with their abacus’s and they have been throwing the hoops and balls and copying the adults carefully – great ball skills. This week the children got a new set of 6 proper tennis rackets and lots of balls and some new basket balls and they had a ‘ball’ (not funny, sorry). They played a game inside called ‘Magic Ball’ where they roll the ball to their friends whilst chanting some sort of magic chant and the children loved doing this. They had the baby care paraphernalia out too which of course is always a hit.

Our clever Gorillas this week have been talking all about holidays – where they have been, where they want to go, what they did/will do etc. The adults too shared their experiences and they looked at the globe at the same time to show where places are. They did paint blowing with straws and made ‘flowers’ and ‘trees’. They made lots of play dough of different colours and they moulded it into the shapes of different fruits. They had a classic ‘home’ corner with phones, washing, cooking and all that a home entails. They had many a phone call with the many phones and we heard funny replicas of many an adult phone call – they are so funny when they say the thing they here at home – ‘hang on a minute, I’m just going to text so and so’ etc…. They held books up and interpreted the pictures to make up their own stories to their friends. They are so confident it’s just brilliant – but they listen to their friends too which is really important. They had their road shapes out and recognised the different shapes for the little roads. They had some lovely games of tennis with the new rackets and balls and those who are interested proved to have great hand/eye coordination. They always love their Sticky Kids’ sessions and this week was no exception. They did all sorts of copying letters according to their individual stages and have been really enjoying their new alphabet and number stamping sets with all different coloured inks.

The vegetable patch transformation has now begun and by the end of next week it will be ready for all our plans. Have a great weekend everyone – another long one, how lovely.