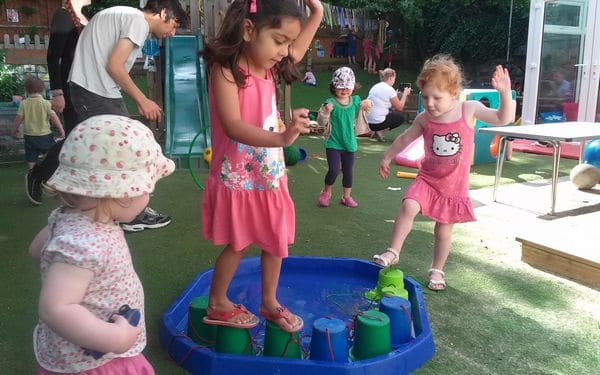 This week our Chimps have been using binoculars to look around and focus on objects, things in the sky etc. They have been building sand castles in the sand tray and they have been making patterns with water and paint brushes on blackboards outside – they love this never-ending fun! They made their own binoculars, decorating them and using them at group time. They made cress heads that they will be watching growing over the next few weeks and they have been fitting boxes into each other . They had water in the builders tray and were learning the Makaton signs for washing and cleaning and they were washing their hands and feet whilst the team were talking about the sign. They had the small world village and people and were walking and jumping them around the buildings and roads and pushing them down the slide in the playground etc. They read their favourite story of the moment –The Snuggle Bunny’ before sleep time. They had the babies and changing mats and other paraphernalia and they pretended to be mummies. They practiced throwing and catching with soft balls and bean bags and they shook bottles filled with different coloured water to music for a lovely sensory/musical activity.

The Baboons have been talking all about dinosaurs and made dinosaur footprints in the sand talking about how big they would be in real life. They have been playing with moon sand and the team made them some shaving foam paint which they loved painting with and squidging around in their hands – fascinated by the texture. The Baboons had lots of dominoes out and have been learning how to make domino lines around the room and knock them over. They did some fruit tasting and loved making fruity skewers. They talked about and read books about healthy eating in the book corner and they had a brilliant musical painting session with different styles of music, lots of paint and some giant pieces of paper on the floor. They provided lots of different types of beans (yes, beans) and the children sorted them into their different groups. For a bit of physical development they drew long lines and the children balanced along them. For music and movement the Baboons searched the room and outside for different resources that if ‘played’ would make different types of music. They loved this and made a right old racket. The Baboons went on a really lovely outing on the bus to Taj and they walked around the shop looking for the different fruits and vegetables that they had talked about in their healthy eating sessions and they helped carry the basket around to fill it up and pay for the nutritious international produce.

The Gorillas had some lovely chats about what school will be like. They talked about the subjects they would learn about and how interesting it would be. They talked about school rules and lots of other school related things. They did some more floating and sinking experiments with boats and other containers and they made and decorated little school books that they were very proud of. They are getting so excited about going off to school its just lovely to see. They made salt dough and played with the marble run – they are great at putting this together on their own – it is actually quite tricky. They practiced their numbers with an array of calculators and the team did some simple addition with the older children. They had the train set out in their small world area and really enjoyed the new set that they just acquired. They read stories about going to school and had lots of discussions about it – they really are very excited about it! They did lots of measuring all around the room and the garden with their measuring tapes and they imitated animals in music and movement with all different types of music. They focused on balancing with a lovely obstacle course in the garden. They got a new selection of trains for the train track that breathed new life into it and they got a new wooden farm too that they will be playing with more next week.