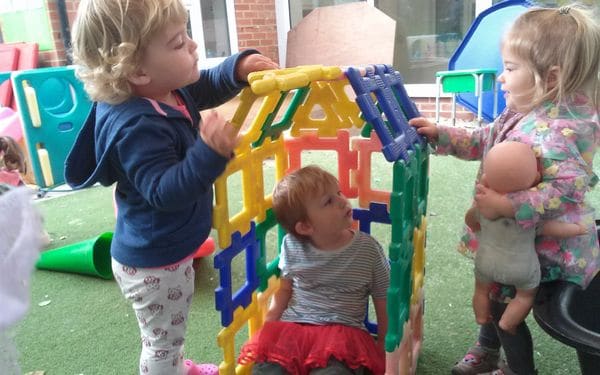 The Chimps this week have been making some wonderful lego prints and mark making with flour and glitter. Some of the little ones were quite amused with erasing the grown-ups pictures in the flour and watching them draw them back again. Their construction activity has been one to try their patience as they’ve been creating cubes and prisms with the connex shapes in the garden. Some of the children put items inside and carried them around like little baskets. The Chimps have also been playing a bit of eco Russian dolls with empty bottles and tubs as they’ve taken to placing them into each other and finding their matching lids and they dunked a few in the water tray for their floating and sinking activity.

This week the howlers have been taking a numicon leaf from the Gorillas and have used their little ducks to represent their number of the week, 4. They’ve also been copying the greats and have had a classical art session with Vincent Van Gogh. Well, not the artist himself obviously but with some photographic inspiration as they created little sculptures with tin foil and painted baking paper with milk and paint. There was also a bit of leaf picking and printing on the creative table. As all the rooms have been in a making sort of mood these past two weeks, the Howlers followed suit and constructed wood block houses for their teddy bears so they can have somewhere cozy to sleep. As the season is changing, the Howlers have been reading books about autumn and even driving cars around their autumn town as the leaves blew down. Since they love our non-toxic basil seed slime, they’ve been making earthworms in soil, practicing their cutting and rolling skills with the slime. Their role play has been a kitchen and they’ve definitely got into the culinary spirit as we’ve seen some colour coordinated chefs romping around in their aprons and hats. They even laid out a spread for their teddy bears and had a picnic. Spoiled rotten those teddy bears.

The Baboons have been giving the grownups some stylish new hairdos in their hairdresser role play. They’ve been cutting, blow drying, and styling with some helpful hairstyle images for inspiration. They’re number this week has been 3 and they’ve been printing the numicon shapes on paper and talking about their colours and building up numbers with them. For music and movement, the Baboons had a good stretch with some yoga. Some of the Baboons are clearly ahead of the game and their poses were far better than any of the grownups. Some future yogis perhaps? In the small world area there has been quite a noise about the place as the Baboons have been pretending to be on a farm and since they’ve been doing such an extensive amount of construction work recently, they decided to extend the animals lodgings with the wood blocks. So considerate. For their creative activities they made spaghetti faces, creating different expressions and talking about feelings. They also created some wonderful smelling cornflour putty (cornflour and body wash), creating different shapes and even stacking them on top of each other. The Baboons were very pleased to start a new book this week, “Alice in Wonderland,” which focuses on the colours in the classic story, so don’t be surprised when your little ones practice their orange Cheshire cat grins and describe the not so nice Queen of red hearts.

The Gorillas have also been talking about the changing season this week and making their own leaves to decorate their windows and even had a park trip to spot all the different colours the leaves were. While in the park, they also had a few relay races, and a few rounds of golf with some rather creative golf clubs (tennis rackets). As they’ve been rummaging through leaves, it’s only apt that they have a bug world in the small world area. They’ve been working out quantities and sizes by filling boxes and containers with objects around their room. In the book area, the Gorillas have been reading “The House of 12 Bunnies,” talking about all the different things the bunnies were doing and also talking about feelings with “Giraffes Can’t Dance.” Their role play has been a construction site and I have seen some rather high ceiling scrapers from the little builders. On the puzzle table, the Gorillas have been creating shape masterpieces without the aid of the puzzle boards and using a plain felt canvas instead. There was a cloudy skies and even some butterflies.