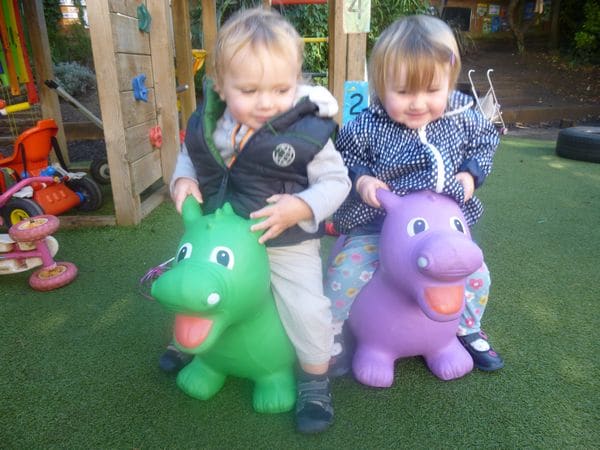 What a fantastic week we’ve at Young Friends. The lucky children could not contain their excitement when they saw their new animal bouncy hoppers. There are two dragons and a cow (there is a dog too but we blew it up too much and it got a puncture so it is being repaired). The children have absolutely loved bouncing along the garden riding their new toys-they are physically quite demanding so a great form of exercise. There were so many other things the children enjoyed this week so on with the recap…

The Gorillas have spent this week on an African safari and have loved every minute of it. The role play and small world areas were joined and transformed into a sweeping jungle with leaves, trees, animals and even their very own safari jeep and to fit in with this theme the children have been lots of jungle based activities and crafts. They have made fantastic animal masks and imitated their favourite animals with their movement and sounds. They have carefully coloured in lots of jungle animals. They have had circle times for safari discussions and they have made carefully thought out lists of what they’d need to take. They have even made special maps for their jungle trek and used binoculars to spot the animals. On the creative table the children made some impressive collages of different animals and the rain forest and at group time the children did ‘jungle massage’, tickling each other to jungle sounds – soon no doubt to be a recognised service offered at reputable spas countrywide!

The Baboons gained a new ‘friend’ this week – curious crocodile. The children helped the staff to make and decorate their new friend and during group time they answered all sorts of interesting questions from their curious friend. The children thoroughly enjoyed their role play this week…. Their fantastic home corner was an actual family home – they were busy preparing meals for each other with their oven and microwave, doing the washing and ironing, watching the television and looking after the babies. There was some brilliant constructions being made with lego all week, with the children focusing on building houses and on the creative table they used different sized objects to make colourful dotty paintings. To top it off there was lots of fun garden time with a focus on hula hoop tossing, catching and rolling.

Emma started working in the Howler Room this week and has been playing with the children and meeting the parents. She has breathed fresh life into the air and everyone is having a lovely time. Together with Bex and Jodie and Lottie she has brought new room layout ideas and it is looking better than ever. The Howlers had lots of fun cooking this week by mixing and pouring all the ingredients for some tasty cheesy bites. They also had a new friend move into their room, called ‘Moo’ the cow who they have loved sitting and bouncing on around the room. On the creative table, the little ones got messy and made some colourful and sparkly hand print butterflies and black and white chalk pictures. The sand tray was taken over by dinosaurs this week and the children had their very own pop up circus tent with balloons to play in which they absolutely loved. As well as all of that, there were ball rolling games at group time and lots and lots of beautiful singing.

The Chimps have had a wonderful new sensory tunnel to explore this week which Carly and Amber made for them. The little ones loved crawling through it and tugging on all the crazy stuff that was hanging down – tinsel, socks, foam strips and all sorts of other material/textures hanging down from the top. Their main activity this week was tea staining and the babies really enjoyed pushing their tea bags around their paper making some ‘antique’ scrolls for their parents. In the room there was a boat role play where they could sit and paddle with little oars and there were lots of cars to push down a ramp. In the messy area there were pipes for water filling and transporting and squeezy glue bottles. At group time the Chimps used their new song board and practiced all of their favourite action songs.

Do you use every natural phenomena as an invite to learn new things? Our children worked out themselves that the wind had blown over these recycling bins - our team got out windmills and they had rich discussions all about the why's and wherefores of wind #snapforchange #eyfs ... See MoreSee Less

Have you masses of paperwork taking up space because of retention periods? We are making a big effort to go paperless and scanning all documents to computer. Its cleansing for the soul and environment #snapforchange #compostyourpaper #includethechildren #TomorrowsChampions ... See MoreSee Less

Our Foxes received a stick phone call from Grandmother Tree. They asked if they could forage - she agreed as long as we looked after her environment. We all said of course we would, and thanked her with hugs #snapforchange #TomorrowsChampions #sustainablecurriculum #loveit ... See MoreSee Less

This was the collage our Badgers created when they were asked to collect something special from the woods. When we grouped together afterwards our collection, we created a piece of art working together.
#naturekids #outdoorlearning #holisticlearning #snapforchange … See MoreSee Less

Endless fun and investigations to be had with our tulip flower playdough.
#learningthroughnature #sensory #snapforchange … See MoreSee Less

This was the collage our Badgers created when they were asked to collect something special from the woods. When we grouped together afterwards our collection, we created a piece of art working together.
#naturekids #outdoorlearning #holisticlearning #snapforchange

Reply on TwitterRetweet on TwitterLike on Twitter3Twitter
Load More...