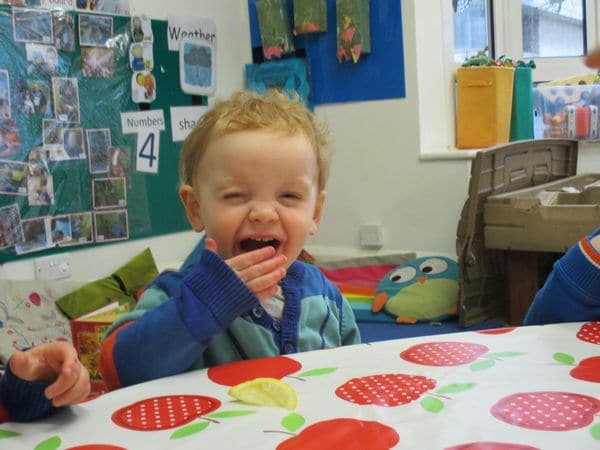 The Chimps started off their new week by experimenting with fruits. They squashed strawberries, blueberries and raspberries on paper to create marks and feeling new textures – of course a fair bit went in their mouths but that was to be expected! They have also been caring for babies – giving them baths, changing nappies and dressing them (maybe they will be able to look after themselves from now on!). Actions songs have been very exciting at group time. They could not get enough of their old favourite ‘Heads, Shoulders, Knees and Toes’. They have loved getting messy with gloop this week and creating love heart Valentine’s Day cards with cotton wool and different materials for their mummy’s and daddy’s.

This week the Howlers have been doing lots of food tasting which they always adore. They tried lots of different foods such as lemon (delicious!) and passion fruit, creamy cheese and other such. This was an exciting way to try new flavours and learn descriptive words relating to them. The Howlers also enjoyed copying and ‘writing’ numbers and letters in sand – of course they were more squiggly than actual shapes but they understood what they were trying to do which was rather clever. They got very sticky making their very own planets with paper, paint and balloons – the girls just asked me if the earth looked like the earth and rather wonderfully it actually does. They learnt about planets and their names by watching and jiggling along to the solar system song on the Ipad. They cared for babies by changing nappies, feeding them, changing their clothes and putting them to sleep. They also enjoyed making heart shaped Valentines cards for their families.

The Baboons have also had a space themed week this week, they have been exploring space rocks and the moon sand and flying round the room with their very own jet packs hand made by the Baboon team and a total hit, especially with the boys. They had a space control panel in their role play area which was really well made again by the imaginative Baboon team. They made delicious scones (well do they tell me) and Valentines cards covered in hearts and fun collage materials for their mums and dads. In the outside room they experimented with green alien play dough. They rolled it and poked it and made all sorts of spacey sculptures. They were using chalk to make different marks on paper and on the chalf wall too such as smudging, fading etc.

This week the Gorillas have had a flower shop as their role play. They have been florists and making their own flowers made out of tissue paper. They have been arranging them and selling them and putting them in water. They also made Valentines cards for their families and wrote/copied their own messages inside. They had diggers and trucks scooping up all sorts of different objects in the sand tray and an airport with literally masses of aeroplanes and an airport in their small world area. They spoke and learnt all about airports, aeroplanes and places they could visit on an aeroplane and what they would need and how long the flights would take and told their friends about adventures they have had abroad. The Gorillas also sorted polygons into colours and groups and balanced them on the scales.

So, the work on our two new conservatories starts this weekend. We are providing a temporary shed in the driveway to store buggies in whilst the work goes ahead as they will be using that corridor for access so they don’t have to disturb the nursery in action during the week. The padlock will be the same but please fold your buggies if you are leaving them as there will certainly be no room to leave them up. We can’t wait to have our conservatories up they are going to be fantastic.