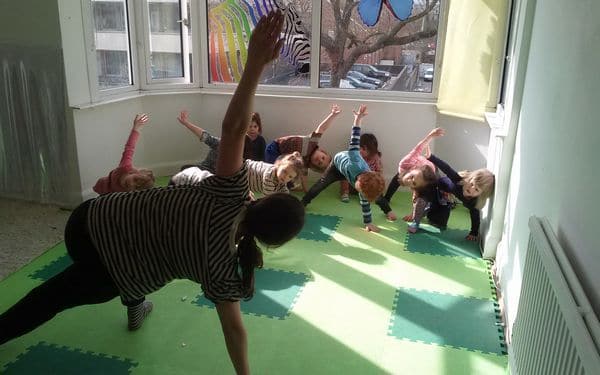 Well Carly’s foot has been feeling much better. So much better, in fact, that the Chimps took a sunny stroll to St. Anne’s Park this week for a change of afternoon snack, scenery and build upon their ball rolling and walking skills. The park goers were even treated to an impromptu performance of head shoulders knees and toes. We all know how beautifully the Chimps ‘sing’ and the team have voices to behold. Their sand experience this week has been sieving. Sieving all over the place and the Chimps have greatly enjoyed the sensation of raining sand on their hands, and a few of their heads. A few of them have even been trying to cover objects with their sand showers and have been trading sieves and colanders between each other – good sharing Chimps. There has been a focus on body parts and reflections this week as the Chimps carried out their group times in front of mirrors so they could point to their features and show as much attention and awareness to themselves as we do them. Also in the group time area those little magpies have been playing with shiny objects and mirrors. As the vegetable patch is entering its prime season all the rooms will be contributing some creative nutritious artwork to add to the area. Our littlest band of artists have created footprint carrots which we are very excited to add to the vegetable patch next week.

The Howlers have already jumped straight into Easter celebrations this week by starting to craft potato print cards. They even have a spring field in their role play complete with lovely floating fluffy clouds, a blazing sun and very tall grass which the Howlers have taken to vanishing behind for hide and seek. Their spring field also boasts a hedgehog, rabbit, and a toucan. I must say, you won’t find a spring field more exotic than that. The role play has been a great opportunity to expand the Howlers’ vocabulary with all the baby animal names. For group time they’ve added to their Makaton signs with “dog,” “horse,” and even remembered “pig” from their previous Makaton session. Clever things. You can definitely tell that the Howlers are the chefs of the nursery as they showed great control over their cutting utensils during malleable play as quite a few told us they were chopping their food. Speaking of cooking, the children made roasted hearts, which isn’t as grim as it sounds. They chopped and mixed their vegetable ingredients (onion, pepper, and courgette) with olive oil and herbs and carefully shaped them into hearts with cutters. The Howlers took a trip to the vegetable patch to see how their veggies were growing and observed some of the newest shoots poking out of the soil. They also spent time talking about how too much water would make them poorly so if it rained there was no need to water them. For ICT the children learned a song on the tablet about emotions. Whilst singing the “Happy, Sad, Angry” song, the Howlers showed off their best expressions. Cheeeeeeese!

The fire station has a new location as the Baboons put out fires and rescued stranded cats from their role play area. They were also on the phones calling up to report fires to keep their fire engine busy. For group time, they talked about fire safety and some of the Baboons made up stories about the kinds of things that firemen and women do and the tools they use for their work. There has been a sensory painting extravaganza in the room this week as the Baboons enjoyed painting using tea bags (a stimulating medium), and seemed to relish the activity even more as the bags ripped. Because we love to inject a bit of science into our sensory activities the Baboons created baking soda artworks and then dropped vinegar onto their colourful pieces using pipettes. They’ve also had some very engaging open ended play with popcorn seeds, bottle caps and sand. They created arrangements with the bottle tops, served out spoonful’s of seeds and coloured pasta shells, and made play dough with the seeds mixed in. In the small world area the children have been exploring the fascinating sea bed with rocky oats and sand terrain and stringy spaghetti seaweed.

Peter the polar bear has been visiting the Gorillas this week to talk about his arctic way of life and even brought his friends along – Freddie the arctic fox, Sammy the seal, Warren the whale, and Holly the hare all helped Peter talk about icebergs, arctic weather and life in general on an icy landscape. For their sensory activity the Gorillas had a salt and ice experiment to save the animals who got stuck in the icebergs. They observed the holes in the ice that the salt made and spoke about the more realistic dangers for arctic animals such as pollution and climate change. For those that wanted to take a more decisive role in their rescue some of the Gorillas used various tools to chisel the animals free. In keeping with the theme the children hopped from ‘iceberg’ to ‘Iceberg’ in the garden being very careful not to drop in the freezing sea. For music and movement the Gorillas went on an arctic trip with Joy Bob the polar bear (no relation to Peter), and went down mountains using sledges, helped the penguins sort their muddled up babies, and helped Jeffrey the fox to warm up and take him to his igloo. Goodness those animals have certainly been keeping the Gorillas busy this week. It seemed only fitting that the children took a time out in the book area to read a story called The Lost Polar Bear (a few other animals were lost, too) and another – The Polar Bear and the Snow Cloud, which was about a bear who made some animal friends out of snowflakes but they all melted. Poor bearykins.