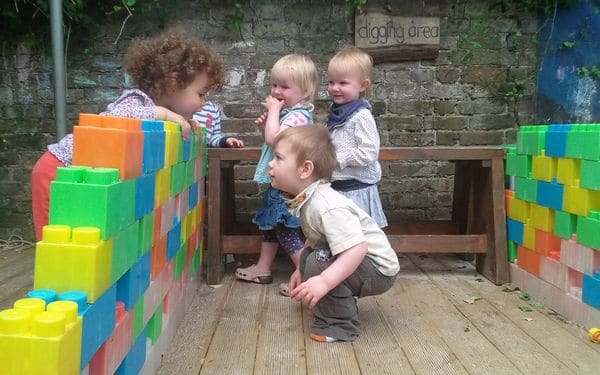 Hi everyone. Please note this blog was written before our sports day on Friday afternoon (due to having no time to do it on Friday) so the photos and summary of that will appear next week…..

The Chimps had the circus tent out this week and made crowns whilst sitting inside it. They had a messy mixture of soil and spaghetti to mush around and they loved investigating the feel of it. They covered the table in shaving foam and made it really smooth so that the children could use their fingers to explore making different shapes and tracks and they furthered this by getting out different objects and printing different shapes and patterns. They shook around different instruments both home-made and otherwise to music had some lovely soft play sessions and they made some careful tracks made out of all different shaped objects. They sung lots of songs and did the actions and they had a lovely time letting go of balloons and listening to the noise they made after the team had blown them up.

This week our Howlers made sushi! They loved tasting the food, feeling the different textures and rolling out the sushi. They had an array of ICT toys out and they became immersed in pressing the buttons, spinning cogs and pressing certain buttons to make certain sounds. They made ‘rainbow foam cupcakes’ and they loved squirting the foam and sprinkling the finished article with glitter – strictly no tasting here! They used the Little Tykes car mountain as a ball run and loved dropping the balls don the top of the mountain and catching them on their way out. They got very messy with shaving foam and clapped and laughed as it spurted everywhere. They had the animal action cards out and as they were held up individually the children pretended to be the different animals – particularly enjoying galloping like horses! They did lots of singing of traditional nursery rymes but also learned some new songs which they will keep repeating as they learned new words and actions. They did lots of different ball games and practiced the different sports that they will be doing at sports day. They did some lovely marble painting and enjoyed rolling the marbles in their hands and in the paint and watching the patterns that they could make and they also had different bugs hidden in sand and hid and found them as well as practicing their bug-related words.

The Baboons had some lovely group times this week when they looked at pictures about and talked all about different types of families. They had figures in their water tray and pretended they were swimming and riding in boats. They made shaving foam cupcakes (quite a popular activity in the nursery at the moment it seems) and they made some pretty rainbow flags and collages made up of different pictures of children doing sports. They made a strange but fascinating and appealingly textured mixture of corn four and conditioner and loved feeling it and making shapes and they did some great junk modelling – really using their imaginations to decide what they would make. They had an ocean scene in their small world section and they had books all about different families out in the book corner to support their group time sessions. They had a kitchen out in their role play section this week and they did ‘pom pom colour sorting’ with coloured trays and, you guessed it, pomp oms. They made rice shakers with toilet rolls and proudly used them to shake them to the beat during music and movement – actually they enjoyed painting them rather than making them but the result was a resounding success.

This week the Gorillas looked at maps and globes and talked about where they and people they know are from They had cups and drainers in the water tray and they did lots of practicing of carefully cutting around and sticking different shapes. They made some lovely constructions out of Lego and they made a football pitch with nets and balls out of junk modelling materials. They made healthy flap jacks and were very proud of their produce. They practiced sounding out and typing three letter words on the computer and they explored inside and out with magnifying glasses and binoculars. They looked at simple reading words and practiced sounding out three letter ones like rat, mat, cat etc. and they made some rainbow patterns with scrapers after creating a base with wax crayons covered in black paint. They played volleyball and basketball in the garden and talked about the different rules and they had a library in their role play area and had different stories and pointed out letters as well as pretending to take out books and return them and talking all about how libraries work. They had a lovely keep fit session too as they enjoyed it so much last week.