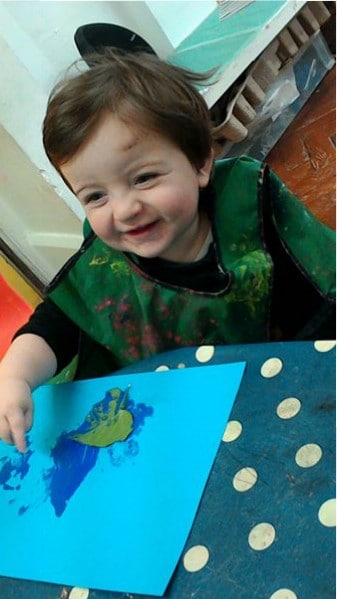 It’s the most wonderful time of the year!

Though not officially launched, the Gibbons children have been none the wiser as they have been enjoying both their newly resourced (new things are still coming in) rooms complete with handmade  (by Louise) pallet shelves. Both rooms have a much homelier feel now and the children have been relishing the ease of access to various toys and resources. And amidst all this excitement we are full swing into the Christmas/holiday season! The Gibbons have kicked off the festivities with holly decorating using green and red tissue paper and glue. They’ve also been scrunching up tissue paper to create glittery Christmas trees. The small world has been a medieval scene with the Happy Land castle. There was also tin foil boulders and lots of straw, just like those good old feudal days in the village. Okay they weren’t that good but the Gibbons haven’t learned about the Dark Ages yet. At music and movement time, the activity focused on cooperative play as they threw bean bags to each other and even made a few attempts to balance them on their heads. For their role play, the baby nursery was full of babies and the Gibbons had a blast showing them all the love care and attention that we do them.

The Baboons have been ever so busy this week getting prepared for the holiday season. At the designing table, a two-part activity of salt dough decorations was prepared. First the children created the dough from scratch and chose their molds. After they cooled from the oven they eagerly decorated their shapes with glitter and paint. The mantelpiece has been nicely decorated with their paper plate cone trees and the Baboons also designed felt trees which they sprinkled with flour snow. How festive. In the small world area, the temperature has been rather cool while the children explored their arctic terrain with igloos, polar bears and ice caps. For those chilly days, it’s always nice to sit indoors in a restaurant and stuff one’s face, which is exactly what the Baboons did this week in their role play area. On the tablet, the Baboons have been practicing their Christmas song with some inspiration from a rendition of the Reindeer Pokey. When they’ve not been rifling through wrapping paper and excitedly talking about toys, the Baboons have explored sound in the dance room with various instruments, including those Santa favourites, jingle bells.

Who wouldn’t be curious about Santa’s Sleigh at this time of year? Well he’s very kindly let us borrow the patent, and a little magic, to make one of our own and the Gorillas have been going on trips around the world in it – some even took a ride on Rudolph. And just in case they need to entertain themselves for those long journeys, the children have been learning Christmas song staples in Spanish. At group time they have been talking about Christmas traditions around the world and why we celebrate it. They have been very excited about the advent calendars, of course. As the time has come to prepare for the mulled wine evening singing, the Gorillas have been practicing their Christmas song and moves in the dance room for music and movement. The small world has been a rather magical, and green, spot as the Gorillas had to help the fairies find their decorations. Using only tweezers, because their decorations are very fragile you see, the children picked up sparkly pom poms and collected them in a cup for the fairies. Always helpful those Gorillas.

Who needs plastic when we have wheelbarrows!?
#YoungFriendsNurseryHove