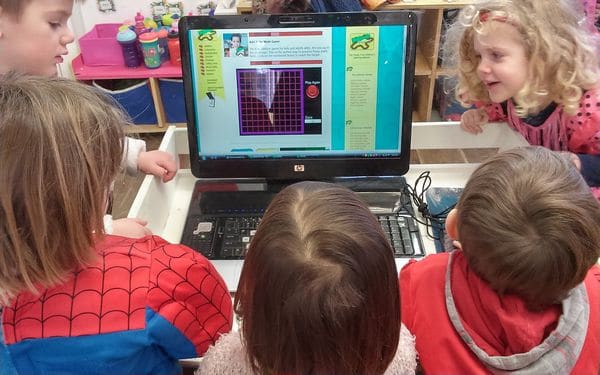 The chilly weather isn’t letting up so the Gibbons have been making their own winter hats. Nothing so warm and fluffy as their real winter hats, but they quite enjoyed using different materials to create their own paper versions. In the Green Room, the little ones have been building structures with Duplo and finger painting faces. Their own as well as on paper. Live dangerously. They also created under the sea pictures and have been pulling out all manner of surprises from their counting box. In the White Room, they’ve been quacking around in their duck pond complete with water beads and…well, ducks. The Gibbons have also been picking out frogs and crabs. Apparently it’s a rockpool/pond. Nothing wrong with mixing ecosystems. Already used to pulling things out the counting box, the White Room had a sensory box and the Gibbons have been having a blast with the textured materials and bangles. For their music and movement activity, the children have been playing Simon says, only without the Simon. They don’t understand who Simon is. Not sure I have any idea either.

There comes a time in a young Baboon’s life when one has to talk about the Golden Rules and this week, that time had come. The Baboons have spent the week discussing the importance of all those pesky rules like no running indoors, gentle hands while playing, and tidying up after ourselves. You may have even noticed there are more visual prompts along the Baboon floor to serve as a gentle reminder to walk and the children have been practicing their self-control as they stop themselves in their sprinting tracks to observe the picture and follow suit. For their physical activity, they have been all over the room to find out what attracts and repels magnets. As they are still out to sea in their role play, the Baboons have been exploring instruments that make something of a seaside sound and tapping out rhythms to a sea soundtrack. Sounds very relaxing. At the designing table they’ve been all hands as they created pictures with ice block paints and also showed a dab hand at finger painting. See what I did there? The Gorillas have ever so kindly loaned the Baboons their Numicon shapes so that they could enjoy some counting and matching activities. Experiences at Young Friends are not always limited to the children. Our lovely Alexandra had the time of her life with the children’s gloop activity as she had never experienced it before and the Baboons had a blast showing her all the fun to be had with this kooky texture. I don’t know who enjoyed it more. Alex or the kids….

The Gorillas have been a rather feeling bunch this week as they’ve been focused on emotions. They have been creating faces using plates, bottle lids and various materials. I’ve also caught a few artistic hands making food art faces. In the small world area, the children have been using emotion cards to identify the feelings of their dolls and create scenarios for them, talking about how and why they’re feeling that way. Speaking of f…f…feelings, the Gorillas have been focused on the ‘f’ phonic during their sounds and letters activity and tracing over the letter. It hasn’t all been talk about happy and sad. The Gorillas have done a bit of sky watching and created their own galaxy pictures. There are also some emerging mathematicians in the room as they’ve been particularly keen to use the Numicon shapes to add and subtract while our superheroes have had to pay for the pleasure of wearing their costumes as a Fancy Dress Shop has sprung up in the role play area.