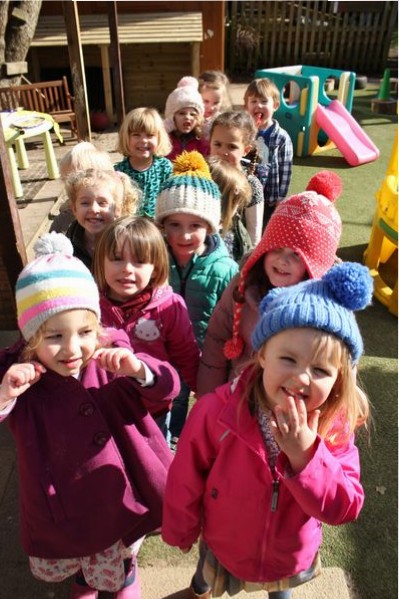 Never too young to save lives, the Gibbons have donned their doctors’ garb to take of the poorly, which we’re never in short supply of around here. A few of the teddy bears needed plasters and the Gibbons were happy to make house calls as they carried, or dragged, their supplies around the room. Their music and movement was, of course, focused on the body and they sang “Head, Shoulders, Knees, and Toes,” along with a fresh new song by the Gibbons team that included cheeky, cheeky chins. The little ones even made their own x-ray hand prints using black paper, paint, and cotton buds. The White room is newly equipped with a floor mirror Perspex, so the little ones have been having a blast crawling across and making goofy faces at themselves. With all this self-reflection, they’ve also been drawing faces onto a head template in the Green room. ‘Tis the season for planting and the Gibbons have started things off with sunflowers. Hopefully we’ll be able to transfer them to the allotment when it’s ready.

It’s been quite the family affair in the Baboons as they’ve opened up their own nursery in the role play area and have spent the week talking about their own families. This theme couldn’t come at a better time as quite a few of the Baboons have new or on the way siblings. They even had a chance to view baby scans on the tablet. In the role play area, some of the Baboons have been particularly nurturing as they ensured all their babies had cream during nappy changes. It’s not all been babies and bibs, though, as the Baboons have kicked their growing season off with cress. The children created sensory balloons, filling them with rice, flour and various other materials and then describing the feel of each balloon. In the garden, it’s been all about maths and the Baboons have been observing numbers in the environment and counting how many of certain things they could see. In the dance room, the Baboons have been all kinds of beans during the bean game. They ran like runner beans and…ummm…did other actions to become beans. Trust me, the kids love this game.

It’s their second week of classes and it appears the Gorillas have got a hold of this school thing as they took turns pretending to be teachers and leading the class. They made sure everyone was signed in and even led a few phonics lessons. “Rabbit” is the Tatty Bumpkin pose this week which strengthens tummy and shoulder muscles, as well as builds co-ordination. The Gorilla team are thinking of ways to stump the children during their phonics sessions as they’re all starting to even recognize double sounds and simple words during reading time. This week the focus was “oa” and they didn’t skip a beat in picking them out of and thinking of words that include it. For music and movement, the children played a rhythm game with drums. Each child would tap out a rhythm of their choosing (sometimes loud, sometimes fast, two beats, one beat, etc.) and the others would listen and copy. The trick was also for all of them to be perfectly in sync as they stopped and started. In the small world area, the children explored the Gruffalo’s world with a small world rendition, in preparation for next week’s World Book day, I’m sure. For a colossal group project, the Gorillas came together to create a junk modelling robot called Bonnie. They were very particular about all her settings, as they should be. Local mosaic artist, Sue Penrose, visited the children this week so they could make their very own mosaic cards. The children were ever so meticulous about each mosaic they placed. Think we might need some mosaics in the building.