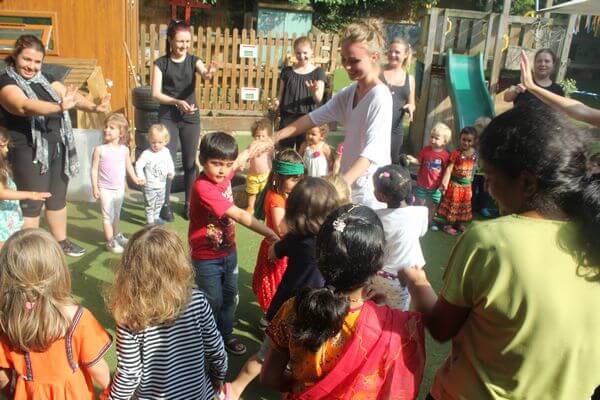 This week our garden, drenched in afternoon sun, became host to the vibrant Hindu festival,  Janmashtami. All three groups met in the garden on Thursday afternoon to listen to Anika’s gorgeous and very grown up older sister dressed in her finest Hindu attire tell them all the story about the birthday of the Indian God Krishna. She brilliantly explained how her culture celebrates the Krishna festival and instructed us on how to play a traditional and very wet game for the children to play. Water balloons were attached to a rope which had to be burst using sticks – although squeezing the balloons before the stick prodding seemed to make the game a much splashier and hilarious experience. Then the whole nursery learnt Hindu dance moves and danced around the garden in rounds with our little dressed up Ganesh (Mabel) standing in the middle. Both the team and the children really got stuck in moving their hips like professionals!

Lottie Payne came back to work for a day this week. For those of you who don’t know she worked at Young Friends in its infancy and than again at various points but is basically a very good friend of the Young Friends team and is very soon going to have a baby. The children really enjoyed having her around.

The Gorillas have been wrapping up the Reggio resources with tin foil and giving them to each other as presents in the home corner. They spent the week mastering they’re pretend happy faces as they unveiled stones, balls of thread, pine cones and pegs! The group talked about seasons and the weather, and at show and tell they rolled over the topic by asking their friends weather questions like ‘do you play with it in the rain?’ but the all time favourite question is always and always will be ‘do you take it to the park?’ and ‘do you take it in the car?’. Funny. They also have been talking about the summer and how heat affects our bodies and the weather changes in the winter. They looked at pictures of our solar system whilst playing on the computer,  and were building their related language skills comparing the different sizes and colours of the planets and distances between them. Your not so little Gorillas have also been creating patterns and borders on the creative table, selecting 3 different colours to create lines and adding black to make particular colours darker. The Tate might need to start making space for some new exhibits soon.

Our busy Baboons have been dancing to Janmashtami Aari in the dance room and learning the Indian hand dance moves… well, trying to at least. They also danced along to some reggae and Italian melodies – giggling and stamping their feet at each other. As if that was not enough noise, they all made sensory bags by choosing what they would like to put into zip up bags; from pasta and rice to paint and flour our fabulous Baboons created their own bags of joy to take home. Out in the garden plastic spiders, giant flies and dung beetles have been swimming around in the water exploratory tray. The children have been looking at the bugs through magnifying glasses and picking them up to show each other. Stones, sticks and leaves have been added the the water tray for the children to investigate which ones sank and which floated.

Our little Gibbons have been enjoying a sensationally scented week. They have been exploring reflections and shaving foam – not a common combination we admit. Using paintbrushes they have been applying shaving foam to the contours of their reflection or basically any reflection they could see. They have been exploring cinnamon and curry seed play dough – giving it the odd prod and squeeze and learning different ways to push playdough cutters into flattened dough. At group time they learned the Makaton signs to farm animals with finger puppets as visual clues. Pig, cat, duck and cow were the favourites with the children mooing, meowing  and clucking at their peers. For their physical activity this week the little Gibbons had a bubble bonanza where they all giggled, grinned, jumped and stretched to pop as many of bubbles as possible that were blowing around the room. At the same time they sang ‘Tiny Tim’ – a song about a little turtle who ate too much soap at bath time and burped out giant bubbles.