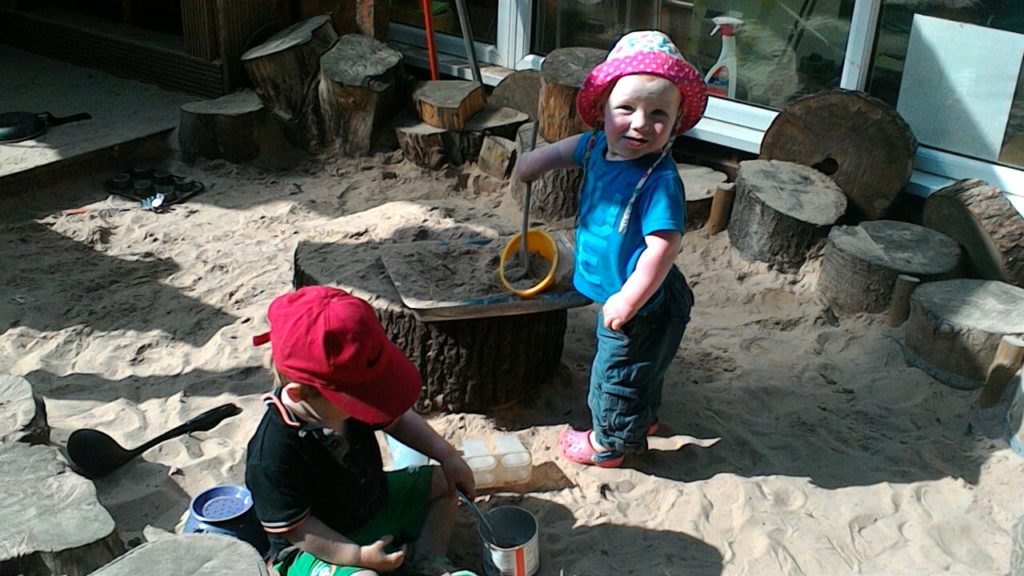 The Gibbons have been striking their poses this week putting on their own fashion show in their role play area. Those Gibbons excitedly chose the clothes they wanted to wear and with a bit of adult help were ready to show off their new outfit to everyone that came to the room. Once dressed and ready to vouge, the monkeys strutted, crawled and toddled around the room giggling with preening as adults told them how amazing they looked. They happily watched each other show off their clothing and swapped their outfits with friends. The fashion show was such a great success they wanted to see what other talents they held. This time they decided to try their hand and becoming rock stars. Throughout the nursery the sounds of heavy metal drumming could be heard which got everyone thinking the Rolling Stones had entered the building! The Gibbons had a few music lessons with their adult Gibbons teaching them the beats to different songs as the Gibbons got into the swing and helped their friends to drum. They excitedly copied adults by starting off calmly and quiet banging on their box drums, slowly getting quicker and louder and stopping suddenly when the team did. After a few lessons the Gibbons were ready to rock and gave their teacher a run for her money. Following their artsy vibes, the Gibbons retired their drums after becoming the world’s most legendary drummers and picked up their paintbrushes to become world famous artists. They chattered away with excitement as they chose their favourite colours to paint their hands. With a paintbrush and paint chosen the looks of concentration dawned on all of their faces as they delicately spread the paint over their hands. Once their hands were covered in beautiful swirls of vibrant colours they gingerly pressed their hands onto the paper. Buzzing with creative juices flowing they splashed about in the sink to wash their hands before helping their adult gibbon to fold their artwork in half and open it again to reveal their very own hand butterfly masterpieces.

Meanwhile, our Gorilla troop have been exploring their emotions this week. With sad farewells for friends leaving for school and bubbling excitement for going to the Outdoors Project in the park, the Gorillas have felt every emotion known to man and ape. In group time thee Gorillas picked emotions out of a bag, told the troop leader what the emotion was and when they have felt that way. They respectfully let their friends talk and listened to each other’s stories. For sad, tired and unwell emotions the gorillas gave ideas on how to feel better and what they would do if they saw their friend was sad. With one little Gorilla saying if their friend looked sad she would buy them a pony, the gorillas all pulled sad faces hoping there would be a pony waiting for them at nursery the next day. They talked about what they like to do when they are happy and the team swelled with pride and joy to hear they like to come to nursery when they are happy. After emotional group times the Gorillas have been taking to the Reggio Emilia area to create fantastic works of art and discover what colours turn into when mixed. The children would choose two colours and would talk to their friends about what colour they could turn into when mixed. After coming up with names for brand new colours never seen before the children eagerly rushed to mix the colours together. They squealed with excitement as the colours changed in front of their eyes and once changed they ran to their friends to tell them the exciting news of what colour it changed to. The Gorillas have become wilderness experts as well this week. At the Outdoor Project the children learnt what dangers there were in the park, like mushrooms and holes in the ground. The gorillas explored the area and flagged up other dangerous things they could find, they found brambles, holes and berries. The children were taught that we don’t pick living plants and we should not lick our hands when we’ve been to the park. The Gorillas then got to go out and find as much treasure as they could. The children excitedly ran around finding nut shells, feathers, conkers, pine cones and lots more. They all gathered around and excitedly showed their friends what treasure they had found.

The Baboons had a lot of fun looking back at Gloria the giraffe’s many many adventures. They sat down at group time and looked over the pictures and the baboons happily told their adult where the different pictures were taken. All the children could tell when Gloria’s picture was taken in the park. The children squeaked and giggled when they saw a picture of themselves or somewhere they knew.  In their new real life role play kitchen the Baboons became professional smoothie makers with the new addition of their blender (blades removed). The children filled the blender with conkers, pasta, twigs and all sorts. They pushed the buttons and made whooshing noises pretending that it was making delicious drinks. They giggled as they poured out the contents into plastic cups to give to their friends. The Baboons pretended to drink the contents and patted their tummies before swapping over so their friends could make a drink. They have been having some quality relaxing time in the dance studio practicing their gross motor skills. The children smiled and whispered to each other as they practiced their gross motor skills by stretching out and made circular arm movements using their arms, starting small and getting larger and larger. The children copied their baboon adult as they did the same thing with her legs and feet. The Baboons lay down on the floor and lifted their legs into the air, one leg at a time whilst giggling and helping each other.

Throughout all of this our new much bigger allotment has been getting ready for our first visits next week. We will be doing projects with the children week by week with the target of creating a self-sufficient outdoors educational and peaceful garden which will be the envy of every nursery around. When the time is right we would love to have a parent helper or two to experience this brilliant Young Friends addition with us.