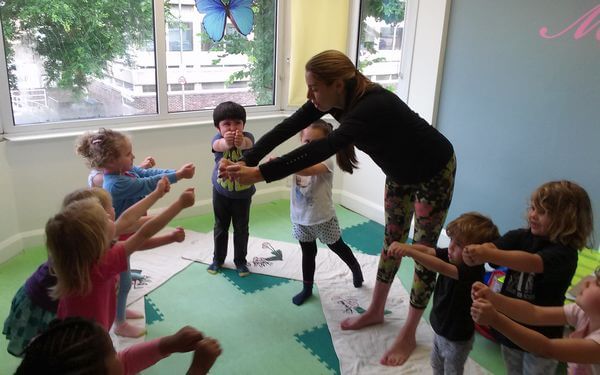 The Gibbons have got their senses all abuzz this week, starting things off with spice painting, using cinnamon, turmeric, and tarragon. Once the paper dried, it turned into a bit of a scratch and sniff project. How fun! In the sensory tray, the Gibbons were coming to grips with their coloured ice blocks. Those brave few who tried to hold on to the blocks were none too impressed with cold. Others opted for a cool refreshment and took to licking and tasting the ice while the rest were content to observe the tracks of ice as they pushed them around the tray. The giant tubes were out in the Green Room and the little ones have been using them in all the ways that only they think of. We were thinking of using them as ball tunnels, but the Gibbons had other ideas: like sitting on them and rolling forward or backward. Oh to be young and unfamiliar with limitation.

The Baboons have been having a wonderful time with the light box on loan from the Gorilla room. They’ve been observing pasta, rubber bands, shells, and cellophane. They’ve also done some tracing around objects. On a lovely sunny day, the children ventured to the beach for more natural resources. It was a bit more blustery than they anticipated so they got quite the workout walking against the wind. All that good sea air in the lungs though made for hungry, sleepy kids so we hope it was a win in the evening for you. Indoors, the Baboons have been enjoying Lego printing and milkshake making. While Amy has an aversion to banana, the Baboons certainly enjoyed chopping up their ingredient for their smoothie. Sadly, Irena the Persona Doll has moved away and no longer attends Young Friends, but the Baboons met their newest persona doll friend, Cleo, who’s from Mozambique. Her native language is Portuguese and she was very nervous as she’d just moved to the UK 6 months ago with her parents and little brother. The Baboons put her at ease though as she mentioned that her favourite colour was purple, which is always a good ice breaker with the Baboons. Welcome, Cleo!

It’s been a rather noisy affair in the dance room, but the Gorillas have tried to work together as a group practicing their percussive skills on the drums. The children have been clapping and banging out rhythms, making up their own as well as following the adults. In the creative area, the children have been learning secondary colours, predicting what combinations will create. They were also using different tools to create various prints on their work. The Gorillas have been quite the builders this week in the loose parts area. They banded together and created life size towers using logs and blocks. They then used craft sticks to make roads and roundabouts (needless to say, roundabouts were a tad frustrating) for their cars. In the maths area, the till has been out and the children have been counting out real money to purchase their produce (also real). We were very proud to hear them identifying coins and contemplating how much items should cost, if not a little flabbergasted at their inflated prices. After purchasing their items they returned to their role play kitchen to cook some very sumptuous meals for their families. They were chopping potatoes – not to be confused with sweet potatoes and some of the children astutely pointed out – peeling onions and cracking fresh pepper over their corns on the cob. Some of the Gorillas have been very keen to see how many vegetables they could fit in a tea pot which led to a discussion on solids, liquids, and what kitchenware best suits each. Still found carrots in the teapot though sooooo….