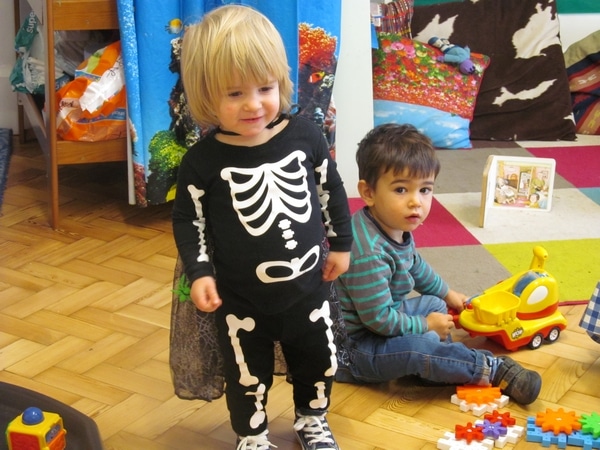 This week has been imaginative and spooky at Young Friends, full of super activities and enhanced by some weird and wonderful Halloween parties and games with prizes galore for the children. We had so many brilliant fancy dress costumes amongst our little monkeys – all in all the whole week has been great fun.

The Gorillas have had a particularly action packed week. They been busy making the absolute most of their masses of generously donated pumpkins. Some of the pumpkins were carved and used as lanterns for their special Halloween snack. Some were used for observation drawings and paintings and the insides of the carved ones were also used to cook tasty pumpkin soup.  At group time the Gorilla senses were challenged to identify different foods and flavours whilst blindfolded. They also got creative with junk modeling and used last week experience of the Fire Service visit to help them be super imaginative with their Fire Station role play.

The Baboons have had an equally fab Halloween week. They too carved their pumpkins but used the seeds to make special pumpkin seed pictures. That wasn’t the only thing they made – they also collected twigs from the garden and used them to make creepy crawly spider pictures. Fantastic. Their role play this week has been a camp fire and there was lots of imaginary marshmallow toasting and camp fire songs, wrapping up warm etc. The Baboons have also been seen making and playing with play dough and investigating ICT with their new selection of calculators.

It’s been a lovely week in the Howlers. There have been lots of Halloween themed activities including carving pumpkins, filling them with jelly (lovely!) and getting sticky and messy searching and squelching through them for spiders. They’ve been making and decorating Halloween masks and healthy biscuits and playing pass the parcel. At group time the Howlers have been reading ‘That’s Not My Kitten’ and using it as a kick off for exploring lots of different textures.

Last but not least, the cheeky little Chimps have been busy cooking this week. They are getting so good at mixing and rolling and taking turns. This week they made bread. They have also been decorating their own Halloween masks. There has been a huge and they have been giggling at themselves and each other in mirrors.  They have been practicing their digging skills both in their sand pit and the rather muddy garden digging area (with their all in one rain suits of course).

So that’s it for another week. Take a look at the snaps for the proof….