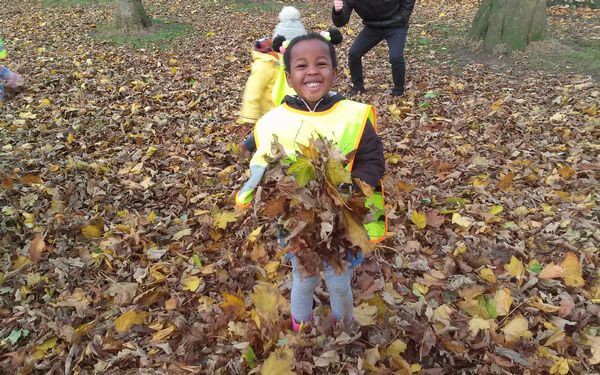 It is Thanksgiving over in the US of A and our Gibbons have created some festive turkeys using plastic cups and googly eyes. Gobble, gobble. Their physical activity was animal movements. The older children selected cards and mimicked the movements of the printed animal. For the younger children, they sung along to Sleeping Bunnies and mimicked the movements for crocodile, butterfly, bunny and elephant. For their creative activity, the Gibbons stamped along with potato shapes, although many preferred doing potato rubbing to stamping. The team added playdough to the homecorner and the little ones have been feeding us the most sublime dishes. In the sensory bin, the Gibbons are already feeling that Christmas spirit as they searched through mounds of tinsel for elusive jingle bells. They’ve even started practicing their Christmas song which will be “Christmas Pudding.” They should be very well rehearsed by Mulled Wine evening.

The Baboons have been practicing their big brother/big sister skills with baby role play this week. The babies have been fed, had their nappies deftly changed by those little hands, and they’ve been rocked ever so gently to sleep. The Baboons had some sneaky shut-eye in the cot, too. For their sensory activity, the little ones squeezed and squidged jelly bags (sandwich bags full of jelly), trying to find the sequins and talking about the texture. In the sand tray, our little pirates were digging for treasure and they came up with quite an assortment of silver: pots, coins, spoons, and foil. The pots and pans had a little excursion to the dance room as the Baboons enjoyed their version of the pot and pan band. They explored sound and tempo as they hit the pans quietly/loudly, slowly/quickly. They also did some simultaneous playing as they had to stand on one foot, spin around, and high knee march all while banging their pans. Whew! That was a workout.

The Gorillas have really been enjoying their listening area this week, choosing phonics stories. They responded to what they heard either by repeating the words and sounds or doing the actions. In the Reggio area, the children have been creating frames and enclosures using natural resources and many opted to fill them with chestnuts. In the writing area, the Gorillas have been practicing writing the names of animals such as dog, cat, bird and rabbit. The small world this week has become an airport and the children were keen to talk about their own adventures on planes and identifying colours and how many planes were available. In the maths area, the Gorillas enjoyed matching the stacking counters to pictures. In the dance room, those feet were finding their rhythms as they danced with ribbons to various tempos and music styles. For a little extra challenge, they tried to match drum beats to the music. All week the Gorillas have been collecting leaves for leaf mulch at the allotment so if you’ve seen full bin liners around, we’ve not missed our bin day. The kids are doing allotment prep and learning about how composting works. Woohoo!