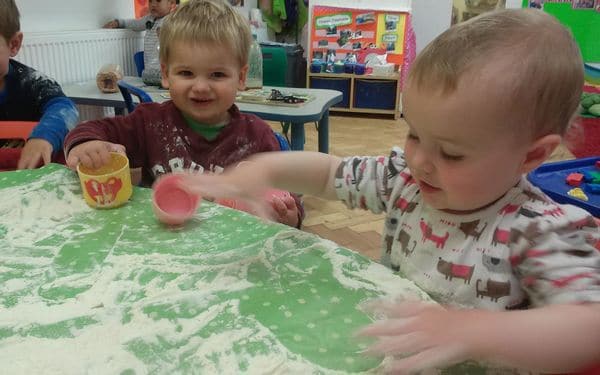 In the Chimp room there has been lots of walking as the team got out the colourful sensory walking mat to entice the crawlers. Their mark making has been chalks on paper and they seem to enjoy watching the effects of making bang mark on the paper. In the small world, the Chimps have been driving cars through tunnels and over bridges and back and forth to each other. Probably best not to give them licences just yet, but they did give it a good go. They all had a hand in making their messy gloop activity this week and the strange texture of the cornflour was a big hit. There are leaves and the feel of Autumn everywhere in the nursery and the Chimp room is no exception as they made lovely Autumn pictures with leaves and seasonal colours.

The Howlers gave their little fingers a work out this week as their painting activity was gloopy puff paint (flour, baking powder, salt and water). They re-used dish soap bottles to squeeze their colours on and when the pictures were returned to them they were all puffy (try this at home and they can observe the magic of paint rising in the oven or microwave). They were more than a little bit fascinated at the end result and couldn’t stop touching them. In keeping with the flour theme, the Howlers also did a bit of drawing in flour for their mark making activity, enjoying the effect of clapping their hands together and watching the puffs of flour. For their cooking activity, they made vegetable soup and the Howlers are becoming dab hands at chopping up vegetables and mixing ingredients together. For role play, a few of the Howlers got into the hairdressing spirit and styled each others’ hair and donned wigs for good measure. Then there were a few rounds of balloon badminton topped off with a yoga cool down. In the book area they have been focusing on books about sharing toys and met a few Australian animals in honor of Irene’s friend Karen who shared some fluffy Australian puppets. The wombat was a big hit – but then again who doesn’t love a wombat?

It was ‘To infinity and beyond’ this week in the Baboon room as the little space cadets built their own rocket and a few box-shaped aliens for their space role play. They have also been learning all about the planets with the planet song on the tablet. In the garden, the Baboons have been flexing their respiratory muscles by using the sound tubes to blow bubbles. Once they got the timing right, they were very impressed with themselves. In the messy play area they had to find the jelly cubes in the shaving foam. Running along with our Alice in Wonderland theme, the Baboons extended the tea party with coloured rice and some of the characters and events have spilled over into their play – we have met a few mad hatters and queens of hearts around the room. For music and movement they’ve been shaking ribbons up and down, side-to-side, front and back to their favourite songs. This week they’ve used cotton buds to paint some vibrant pictures and mix colours. Speaking of colours, the Baboons have had a tropical blue water pool in the small world area, taking the whales swimming and giving them a wash and blowing a few bubbles, of course. In the book area, the Baboons have been talking about Autumn and reading through books about the season, showing great interest in all the changes they see at this time of year.

To kick off this lovely season when the landscape changes its clothes the Gorillas have been focusing on the autumn leaves and woodland creatures by making salt dough hedgehogs and trees. As they pinched and prodded the dough to make quills they talked about hedgehogs’ environments and the different colours they might be. They also practiced their line drawing skills as they created trees and branches and then stuck on colourful paper leaves as well as real ones. Their role play has been all about home routines and the Gorillas have been making appointments on their phones with the doctor and have even been preparing for a natural lava disaster by storing food and blankets so they could camp out on the sofa for a few days without touching the lava floor (don’t ask – sometimes it’s best just to roll with it). In the garden they have been twisting and shouting with the hula hoops and have been extending their skills by tossing them up in the air and catching them. For music and movement they have been practicing making quiet and loud noises using various objects around the room including sand paper. They have also been a very noisy marching band with the instruments. As a special treat, a friend of Irene’s flew all the way from Australia (We’re sure there were other reasons for the trip but we like to feel special) to share a story about some very Australian animals and their puppet counterparts. Lucky Gorillas!