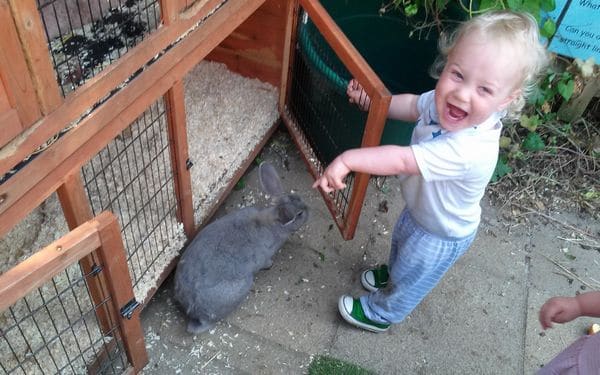 Our multilingual Howlers have been continuing counting to 3 in all different languages during group times. They have been playing with boats, loading them up with all sorts of cargo in the water and splashing around to keep cool. They have done some very pretty sponge paintings and they have been playing with the dolls house and dolls and furniture, making up little scenes and playing alongside each other. They have had a seaside role play and they did a pretty challenging obstacle course in the garden. They had some excited sessions of ‘Sleeping Bunnies’ and they have been taking care of the plant in their room by making sure it has light and water. They have been watching their ‘Planets’ song on their tablet – they get mesmerized by it and talk about it throughout the day (it is a Baby Enstein song with video). Like the Chimps they have also done some lovely Heuristic Play sessions. They have been looking at books on and talking all about brushing teeth – using props of tooth brushes, paste and our large model mouth.

The Baboons have had rakes and spades in their sand tray and have been merrily making different patterns in dry and wet sand. They have made some scary looking monsters out of junk modelling and they have been doing some pretty paintings out of coloured ice pops. They have been exploring the texture of jelly and making a right old mess and they had had the trains and train tracks out and racing the trains against each other and making some pretty complicated tracks. They have been using polenta and lolly sticks to do some interesting mark making and they have had a role play aquarium which they have really enjoyed. Following a resounding popularity at sports day the Baboons have been having different plate-based races like sand on a plate and jelly!