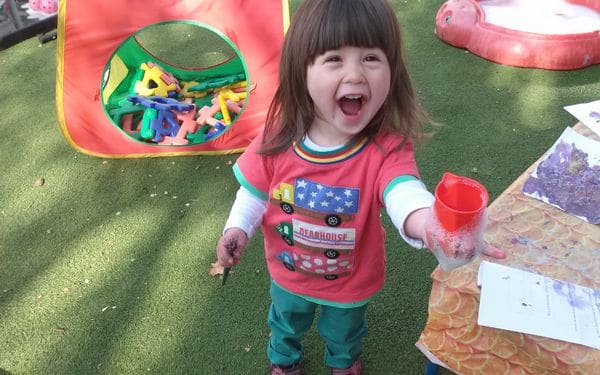 Our Chimps made their own play dough this week and loved rolling it and making different patterns with their different implements. They also did a key and purse activity where the Chimp team hid the keys in their sand and the babies had to search for them. They had a table full of smooth shaving foam which they loved smearing all over their hands and arms – well most of them did (see pictures). They did lots of singing, accompanied by shakers which they excitedly shook around to music. They played with their pull along vehicles and had a lovely time outside watching the staff make enormous bubbles in builders trays. They built colourful towers with foam block and did textured sand painting which they were fascinated by. They played with bubbly water in their water tray and laughed as the team put it on their noses. They climbed outside on their little slide and they had a lovely time with toys on their new padded outside area with their French doors open. They also loved playing with the windmills outside in the sunshine.

The Howlers did lots of bead sorting this week. They made cloud dough (shaving foam and cornflour) and loved the texture of it as they made different shapes and kneaded it around! They made and painted some sorting boxes which they will use for activities next week. They made different meals for everyone with their cloud dough and the role play kitchen equipment. They played with a set of Bowling balls and helped move the builders tray to make them roll about. They did all sorts of activities with the balls throughout the week – one of the best being with a giant tube that they dropped the balls down and watched them shoot out the other end and roll along the floor. They sang different songs in in Italian with Irene and Maria and they took their first tour of the year around the our vegetable patch which is really taking shape now and ready for the children to start using. They used their puppets to talk about behaviour and being kind to each other and they really understood, they were hugging and holding the puppets to make them feel better – some of them did this all day. Lovely.

The Baboons talked about nursery values and being kind to one another, sharing toys and looking after things etc. They had soft sand in their builders tray and took their shoes off, loving the feeling of sand in their toes. They painted and made pasta necklaces and bracelets which they were very proud of. They made many worms and snakes with their play dough this week and pretended to type and talk on the phone (all about work and what they had to do) in their role play office. They started a big sensory collage display by doing bubble wrap painting and this is just the beginning of their investigations over the coming weeks so watch this space. They set up their car track and pushed their many aeroplanes around it, adding cars and people and other things throughout the week. The Baboons had a great time playing with the rackets and balls in the garden. They also had a great yoga session with Irene and found it very funny when they were trying to copy her moves.

Our Gorillas had a lovely time with their sand tray and small world animals – hiding them and roaring at eachother etc. They added water to make it more pliable and they made mountains for the animals to climb up etc. They too made pasta bracelets and necklaces and discussed who they were for, how many pieces of pasta were on their necklaces and the colours that they were using.They made string telephones and talked a lot about sound travel and how they worked which the children were fascinated by. They loved making mini note books with paper and pipe cleaners and wrote notes in them and pretended they were at school. They made some rather intricate structures of their choice with Lego and they practised their letters by typing their own names by copying them written down on paper. Clever. The dinosaurs and volcano were really popular as was their royal castle in which they pretended to be princes and princesses, holding babies and saying/imagining they were baby princesses. They have learnt lots of castle related words this week like moat, drawbridge, turret etc. and what they all mean. They played games with their number flash cards – counting the objects on the cards (some with a little help) and talking about what the objects were. They also played memory games with the numbers, looking at them and taking one away that they had to guess. They had exciting running races outside and ended up chasing each other around whilst pretending to be superheroes. The gorillas made up different songs and changed the words into ‘dinosaur words’ – they loved that. In fact they found the play on words hilarious. They moved cars around shaving foam on their messy table to make different patterns and tracks and they made up their own routine to Pharrel Williams ‘Happy’. Phew – another busy week.

Our vegetable patch has come on leaps and bounds this week thanks to Caz (and Jaimi who decked it and created our new growing bed) and we can’t wait to see it flourishing very soon. Have a great sunny weekend everyone. See you next week x