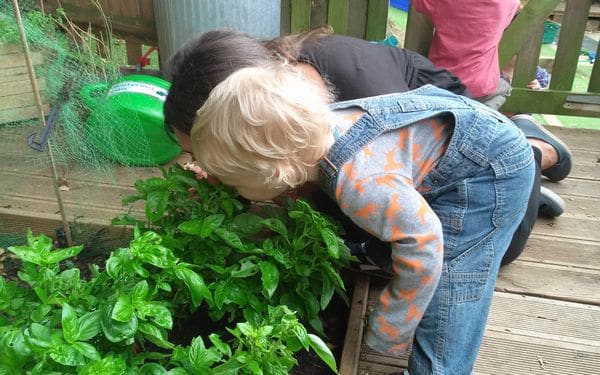 Our little Chimps had a lovely time this week making ‘Fruit Sticks’. They did a lot of tasting and threaded the fruit onto the sticks with a bit of help and a lot of dexterity. They had the wooden dolls house in their room with the furniture and little people and a few of them were cradling the dolls and pretending they were babies – sweet. They covered their builder’s tray with paper and sat in it and drew patterns with crayons all around themselves which they loved. They did lots of baby yoga – smiling and clapping along to the different songs. Maria and Sam were tickling them softly and moving their arms and legs to the music which the babies found really funny. They did lots of dancing to music in the conservatory and they read ‘Snuggle Bunny’ – one of their favourite books (that bunny is the most loved and cuddled bunny in any book, ever). They filled and emptied different containers with dry sand and watched it sift fast and slow really enjoying how it felt on their hands and looked as it poured. They wrapped and unwrapped a plethora of different objects with tin foil and got lots of satisfaction as they completely covered them. They had a really atmospheric story time in the sleep room with the light up turtle – sounds lovely and we’ve asked for an invitation next time.

Our super active Howlers played with bright coloured slimy spaghetti this week and made their usual total mess of the room. They made collages out of macaroni in keeping with their pasta theme. They made telephones out of tin foil and talked at length to all their friends and family. They played with the doll’s house and spent ages tucking up the little people and putting them to sleep only to tell them a second later they had to wake up – doll torture! They did some lovely sponge painting with different shaped sponges and they had the kitchen in the role play are where they made dinner, breakfast and an array of drinks for each other and the team. They danced with objects for props exploring different ways of moving them and around them. They used junk modelling bits and bobs as instruments and bashed and shook them ‘in time’ to music. They went on a lovely outing to the library and they used blocks for counting and colour sorting. They made smelly and slimy ‘basil scented slime’ and squished it around with satisfaction and they made a city out of blocks and moved the people around the city. They added some autumn leaves too for the people to crunch and negotiate themselves around.

At group time the Baboons played their favourite clapping game – creatively entitled ‘The Name Game’. They used our dinosaurs to make footprints in wet sand and they also pretended to dig for fossils. They were veryresourceful and made clothes for their toys with different materials like cling film and tin foil – they had a lovely time making shoes and trousers and talking about what they needed to keep warm. They designed and built different enclosures like a zoo and park with wooden blocks and added different aspects like trees and people and then role played with them for ages. They used spaghetti that they dyed some bright and wonderful colours and whiled away their time pouring and squashing them into different containers learning about not only colour and colour mixing but space and measurements too. They played all week with their construction site and fixed pretty much the whole garden and Baboon room. They used our colourful Numicon pieces to thread and also to make geometric prints. They made a course in the garden out of hoops to jump into either one footed or two and they went to the park to collect some wonderful natural stones, sticks and leaves of all shapes and sizes. They used them when they got back to learn and talk about just that – different shapes and sizes and the many words they can use to describe them.

The Gorillas this week talked about and introduced having special daily helpers. The different helpers each day hand out plates and cups, help to dish out the food, sweep afterwards and wipe down the tables etc. i know what you are thinking that gorilla team have taken up slave labour – but they are really getting involved and as a result the children are being helpful and engaged. They love this new aspect to their day and the gorillas will be doing it daily – chosing the helpers fairly each morning and letting them know with a picture chart what their tasks will be. They have had a lovely hair salon in their role play area and have been creating some wonderful, if a little knotty, hair styles. They had the small world castle and dolls house and have been making up some weird and wonderful stories each day adding more and more paraphernalia and a unique jumble of creatures, people and vehicles. Pretty much everything has been in their throughout the week. They made people out of different coloured play dough and have made furniture for dolls out of wooden blocks – not the comfiest of beds for their princesses but very inventive nevertheless. They had wooden blocks, which they immediately decided would represent gold blocks, with paint brushes in the sand tray and they loved brushing away the sand to hunt for the gold. They made some fabulous pictures on the computer with the paint programme and they played a tasting game with all sorts of different foods and they were all really amazing and tasted them all, talking about the texture and taste and guessing what the different things were.