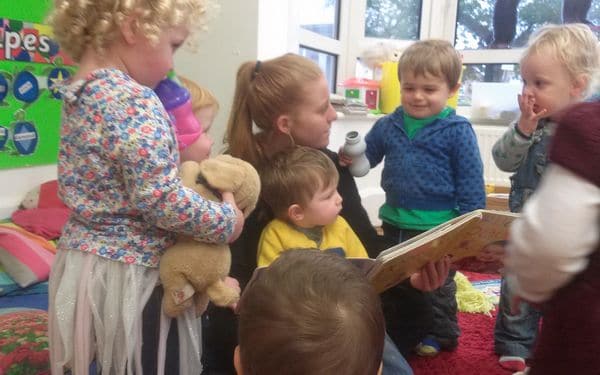 The Chimps have kicked off our Halloween spirit with a spider sticking activity and a fun free for all with the big trucks and white paint as they rolled them over a black sheet to make a cobweb decoration. In the sand area, Carly and the gang have been hiding and jingling keys and pouring water through pipes and funnels in the water tray. The Chimps have had a wonderful time learning to take turns as they slid balls to and from each other up and down a pipe. They’ve been donning all sorts of hats as their role play and seemed to take a great liking to the cowboy hats. Maybe it’s because the rocking pony was close by. This week, Thursday to be exact, was the Hindu festival Diwali (also known as the “festival of lights”) and the Chimps swirled Rangoli patterns in the coloured sand and made finger paint fireworks.

In honour of Diwali the Howlers created their Rangoli patterns from coloured rice and had a look at some traditional rangoli pattern pictures. They have been practising their pouring hands in the sand tray with different sized bottles and containers and have also done a bit of sand painting (glue and paint added) to paint their hands and feet. The Howlers received their first pumpkins this week and it has been a rather wonderful sensory experience as they all peered in and had a squish and a squeeze of the insides. Never ones to waste anything, they also enjoyed toasted pumpkin seeds. Crunch, crunch. In their designing and making area they enjoyed creating glittery spider web plates and also glittery play dough. As we don’t want our dear vegetable patch to be neglected in these colder/wetter months, the Howlers ventured out to check on our lovely vegetables. In the book area, the little ones enjoyed reading the “Giant Who Came To Town” using the story bag (includes items from the story as an additional visual aid).

The Baboons took to Halloween this week like seasoned pros as they made potato pumpkin prints and examined the bones in their hands and arms to create skeletons with cotton buds and white paint. They have also decorated the room with some lovely glittery cobwebs. Now that they know the story of Alice in Wonderland, the Baboons have started reading “The Jungle Book” which focuses on all the exotic animals surrounding Mowgli. It’s early days, but we’re sure they’ll be hissing like Kaa and pouncing like Shere Khan in no time. For music and movement, the Baboon band was in full swing with the instruments. The Baboons also had a go at creating Rangoli patterns with coloured sand on Rangoli printouts. In the water pool, the children were very gently washing all their babies and pretending to be mummies and daddies. For their creative activity, they had a go at working with plaster as they scooped some into animal moulds, added stones and waited for their figures to dry. They were quite proud of their lovely keepsakes.

The Gorillas have been dusting off their ‘eco-values’ posters and talking to the children about the importance of saving energy while each day’s special helpers have been ensuring that unnecessary lights are turned off and no taps are running. In the designing and making area, there’s been a trace of monsters as the Gorillas have been walking through paint to leave monster footprints behind. While they have enjoyed carving out real jack-o-lanterns, they also had a go at making papier mache pumpkins. In the garden, the rather wet slide has been put to good use as the Gorillas have been slide painting with various balls around the garden: rolling them down and watching how wide or narrow a mark each one leaves. Small world has been a muggy, noisy affair as the Gorillas created a jungle using sticks and blocks. They created streams and rivers and found various jungle animals to skulk around and stalk the place. At the magnet board, children have been searching for the letters to their names using their astronaut pegs for a little guidance. In the music and movement area, Cristina and the team introduced a new game called “the Washing Machine” using the parachute. One child stands in the middle while the children holding the parachute spin around to “wash” the person. When they stop they have to say how many bubbles they made and then clap to pop them. For Diwali, the Gorillas coloured Rangoli patterns and listened to Diwali music. Happy Diwali!

One of the children suggested we get our high vis jackets on and go exploring today! What a good idea that was! #YoungFriendsNurseryHove

Let's look after the natural world for our childre

We are officially plant based! This is very exciti