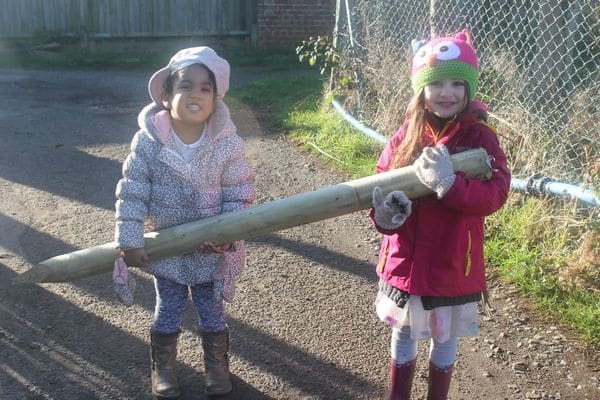 Welcome to 2017! Your little Gibbons have jumped straight back into their fun-filled, messy, routines like they’d never been away. In the White Room, the Gibbons have been putting their animals to graze in their sensory farm small world complete with Rice Krispies and fake grass. The Gibbons also made playdough from scratch, pouring out flour and water and mixing it together until they had the perfect dough. In the Reggio area, they have been using the dough as a base for their spaghetti stick towers. For their music activity, they banged out some rhythms on the drum and practiced moving slow and fast or playing loud or quiet. For a wonderful mess of an activity, the little ones sprinkled a healthy cloud of glitter onto their glue trails.

The Baboons have been missing their friends over the holiday and were super-excited to get stuck in play together again. At the water tray, they’ve been pouring, mixing, and occasionally drinking (not sure why, we do plenty of water time here) the deep blue sea coloured water. Since the Gibbons made such a large mound of playdough, they were happy to share some with the Baboons who made all kinds of playdough models and food with their pieces. In the dance room, the children have been doing yoga and also shadow play using flash lights. Their new listening station was up and ready for action and the Baboons absolutely loved it. Using a large cassette/radio player (which seem like antiques now), the Baboons tuned the radio station, operated the cassette player, and learned to plug in the headphones. They particularly enjoyed opening and closing the cassette deck and listening to stories and music through the headphones.

The end of the old year and the start of the new always makes one take a long hard look at themselves and the Gorillas were no different as they’ve been creating self-portrait paintings. They’ve been using mirrors to get the details as accurate as possible, which they described to each other like the texture of their hair, colour of their skin, etc. They also made hand prints using their chosen skin colours and talked about the importance of fingerprints and how everyone’s is different. In the maths area, the Gorillas have been matching numerals to their quantities with objects on the table. The children were also matching from their number booklet. In the Reggio area, the children have been working on that finest of motor skills, tweezing. Not their eyebrows, of course, that would be weird. They’ve trying to pick up pasta and small items using tweezers. For Nature Kids, the children made birdfeeders using halved coconuts and mixing seeds, suet, and raisins inside. They’re becoming quite the ornithologists as they talked about the different kind of birds they’ve seen including robin red breasts, magpies, and woodpeckers. They also talked about birds of prey such as owls and hawks. As the week’s been rather chilly, there were some hefty sized ice pieces for the Gorillas to explore…if they weren’t too bothered about the frostiness. Brrrrr….

Up at Nature Kids we have been cracking ice and mixing icy potions as well as doing a spot of bird watching. The Gorillas made some natural bird feeders from seeds, suet and coconut shells in the hope that it will attract some exciting wild birds for us to watch. They were really proud of them and helped carry the wood and tools from the minibus to the allotment and we rigged up a bird feeding structure  that we will add to over time. Well done!