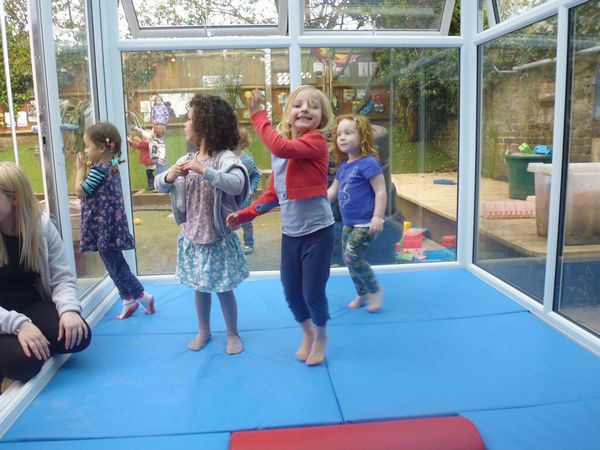 Our little Chimps have had a really exciting week seeing the last bits of the soft play conservatory come into being. We all crossed our fingers as the soft flooring was laid (no one more than my dad who sent off the measurements!) and they have been tumbling and falling around and watching the garden action from their fabulous new glass viewpoint. In their sand and water tray they have had squeezy toys and warm water to play around with. They have been searching for very realistic looking fake insects in flour in their builders tray and they have been looking in all sorts of mirrors whilst holding themselves up on their interactive ICT table. They have been emptying and filling and stacking lots of blocks and building towers up to knock them down again and they have been listening to music whilst shaking our bells of all different tones. They have been making lovely spring daffodil flowers to with paper plates and fresh spring paint colours. They have been playing on their climbing equipment outside and crawling about and exploring the garden and stroking Sizzles, our rabbit. They have just loved the sausage ramp in their new conservatory – the taking away of the original garden doors has opened the whole space out giving our lucky babies an even more beautiful place to play.

Our Howlers this week have been copying the action to lots of number and letter songs. They have been making a big spotty dog puppet for their puppet theatre (I have not seen this yet but will certainly be investigating as it sounds rather special). They have been reading different stories about being kind to each other and have been rolling around in the flour which was actually meant to be a small world snowy town but it didn’t matter! They have been doing giant paintings with brooms and other mark making equipment and they have been doing some clear counting with our abacus’s. They have been pretending to be all sorts of animals during music and movement and they have been making drums out of many a different receptacle. On our sunny days they had a wonderful time splashing around in trays full of water and just having a fabulous time running, playing in the sandpit, blowing bubbles and enjoying themselves to the max!

The Baboons this week have been watching their conservatory take shape and they are finally getting in there today. Whilst watching the progress they have been making lots of different animal noises and learning the makaton signs for the. They started predicting the sounds just from the signs which was rather clever. They did a 3D shape hunt around the room and when they had found them all they built towers with triangle roofs – wonderful. They used our new (non0toxic) waterbeads to paint with andthey made sand pictures of their hands by printing with a mixture of sand and paint. They had our new castle out which they filled with dinosaurs and opened and closed the doors making them hide from each other which they found great fun. They carried on the castle theme by dressing up as princes and princesses, dancing, looking at themselves in the mirror and spinning around thinking they looked rather beautiful. They practised their throwing skills by throwing balls into the tyres in the garden and cheering themselves with gusto when they got them into the target! They have been rolling down the hill at the back and enjoying song times and dancing in the sunshine. They have also been jumping off the new platforms and generally running about and enjoying all the new space.

Our Gorillas this week have been talking about and learning all about spring time. They have been talking about what happens to plants, animals and our countryside. They have been washing up in their water tray which was both fun and useful (toys we mean – we didn’t actually make the Gorillas do the washing up!). The children made jelly ice cream and they made beautiful butterfly wings out of cardboard, paint, collage bits and bobs and string. They also made bird feeders which are soon to be positioned in the tree outside their window so they can spot the birds over the summer. They have had their usual Italian lessons and have been learning Italian songs which just sounded brilliant. They have had a dolls house full of furniture and an array of family groupings (more of a bed and breakfast really) and they read the ‘Very Hungry Caterpillar’ to keep in line with their Spring theme. They did some great leaf painting and did lots of different maths exercises with their counting bears. They had a great time outside running and throwing and catching and dancing around on the back hill (this seems to be the place for it nowadays) and they played catching games with buckets and balls.